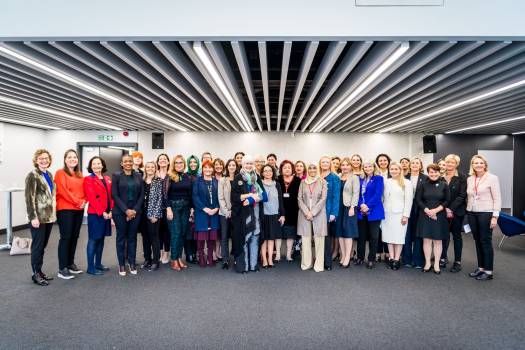 The NATO Parliamentary Assembly (NATO PA) has been a committed champion of the principle that women and men are equal partners in the pursuit of peace and security. The intrinsic link between gender and security has been receiving greater attention at the Assembly particularly since 2007 when the Standing Committee recognised that parliamentarians have an important and specific role to play in promoting and advancing the Women, Peace and Security agenda.

Much progress has been achieved in mainstreaming gender in the Assembly’s activities and policies, such as in Committee reports, Assembly resolutions, through guest speaker presentations in Committee meetings, sessions and seminars. The Secretary General’s regular reports to the Standing Committee on future Assembly activities and subjects routinely includes a section related to the coverage of gender and security, and the Standing Committee provides ongoing guidance. This procedure has greatly helped the progressive mainstreaming of gender into the work of the Committees and other Assembly bodies.

In addition, at the request of the Bureau, between 2015 and 2017, the NATO PA conducted a comprehensive review of the Assembly’s consideration of gender in its policies and activities and the gender balance within the Assembly. As a result of this effort led by then Vice-President Angelien Eijsink (Netherlands), the Assembly adopted a set of measures to mainstream gender in the Assembly’s work and promote a fairer representation of men and women among Assembly members and elected officers. In addition, since 2017, the NATO PA has been publishing on its website a yearly review of the Assembly’s consideration of gender, which the Secretary General presents to the Standing Committee.

Furthermore, the Assembly regularly organises high-visibility initiatives on the topic of gender and security. For instance, in 2019, then-President Madeleine Moon arranged for events at the 2019 Spring and Annual Sessions under the banner “Women in Defence”. These events enabled members to share their perspectives on how to make the most of the opportunities offered by the Assembly. Most recently, in October 2020, on the occasion of the 20th anniversary of the adoption of United Nations Security Council resolution 1325 (UNSCR 1325), the Assembly will host a webinar on Women, Peace and Security with high-level speakers.

The unanimous adoption by the United Nations Security Council of resolution 1325 on Women, Peace and Security on 31 October 2000 was a historic milestone on the road towards a peace and security policy. It recognises the specific impact of conflicts on women and acknowledges women’s essential role in maintaining and promoting peace and security, preventing and resolving conflicts.

NATO has taken action to promote gender equality and the participation of women within its own organisation and structures.  At the 2014 Wales Summit, Allied leaders supported the integration of a gender perspective throughout NATO’s three essential core tasks (i.e. collective defence, crisis management and cooperative security). The NATO Secretary General also appointed a new Special Representative to serve as the high-level focal point on all aspects of NATO’s contribution to the Women, Peace and Security agenda. The NATO Parliamentary Assembly enjoys close and regular cooperation with the office of the Special Representative. Ambassador Clare Hutchinson, the current Special Representative, has briefed members of the Assembly on several occasions.

The Committee on the Civil Dimension of Security (CDS) has taken the lead in advancing the Women, Peace and Security agenda within the NATO PA. In 2010, the Assembly adopted Resolution 381 presented by the CDS Committee, calling for the incorporation of UNSCR 1325 into NATO policies and practices. At its 2020 Annual Session, the NATO PA and its members will reiterate their continuous commitment to the crucial link between gender and security by adopting a report and a resolution on the topic.

In addition, in 2011, the Committee conducted its first survey of the implementation of UNSCR 1325 by NATO member parliaments. Since then, the Committee has published similar surveys in 2013, 2015 and 2018, produced in cooperation with the Geneva Centre for Security Sector Governance (DCAF). These surveys pursued an original and ground-breaking approach to Women, Peace and Security by mapping the distinctive contribution of parliaments to advancing this agenda. These reports provide up-to-date information, identify remaining challenges and identify best practices to be shared by Allied parliaments.