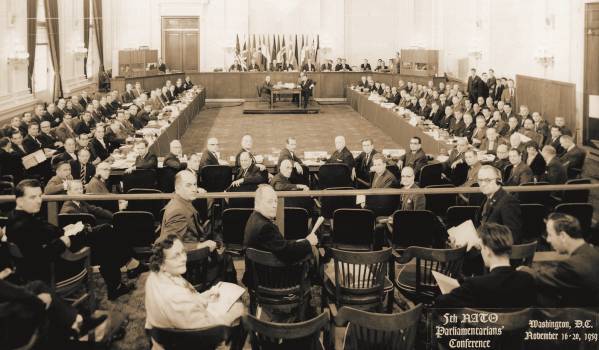 The Origins of the Assembly

The idea to engage Alliance Parliamentarians in collective deliberations on the problems confronting the transatlantic partnership first emerged in the early 1950s and took shape with the creation of an annual conference of NATO parliamentarians in 1955. The Assembly’s creation reflected a desire on the part of legislators to give substance to the premise of the Washington Treaty that NATO was the practical expression of a fundamentally political transatlantic Alliance of democracies.

The first “Conference of Members of Parliament from the NATO Countries” was held at NATO Headquarters at the Palais de Chaillot in Paris on 18-22 July 1955, bringing together 158 parliamentarians from 14 NATO nations. The conference elected Senator Wishart McL. Robertson of Canada as its President, and agreed to establish a Continuing Committee – the precursor of the Standing Committee – consisting of the elected officers of the Assembly (the President and its three vice-Presidents) and one representative from each delegation. It also decided to appoint a small, part-time secretariat, initially based in London until it moved to Paris in 1960.

Committees were established during the second conference in 1956. In 1958, the number of Committees was set to five – Economic, Cultural Affairs and Information, Military, Political, and Scientific and Technical. Although committee titles and terms of reference have evolved over the years, this basic structure remains today.

In 1966, the 12th Conference unanimously agreed to rename the organisation as the North Atlantic Assembly (NAA).  Following France’s withdrawal from NATO’s military structure in 1966, NATO moved its headquarters from Paris to Brussels. The Assembly headquarters moved to Brussels in 1968.

The foundation for co-operation between NATO and the NAA was strengthened in December 1967 when the North Atlantic Council (NAC) authorised the NATO Secretary General to study ways to enhance co-operation between the two bodies. As a result of these deliberations over the following year, several measures were put in place to strengthen the working relationship between NATO and the Assembly. These included in particular regular addresses by the NATO Secretary General to the Assembly, and written responses by the Secretary General to the recommendations and resolutions adopted by the Assembly in its Plenary Sessions. In 1974,  the leaders of Allied governments, in their Declaration on Atlantic Relations, recognised that "the cohesion of the Alliance has found expression not only in co-operation among their governments, but also in the free exchange of views among the elected representatives of the peoples of the Alliance." This declaration essentially endorsed the work of the Assembly without mentioning it directly.

In 1979, the Assembly decided to begin holding two plenary sessions each year. With the introduction of a spring session, the pattern of Assembly activities was set to remain largely unchanged until the end of the Cold War.

The era of partnership and cooperation between NATO and the former members of the Warsaw Pact that followed the end of the Cold War provided an important new dimension to the Assembly.

The Assembly initiated contacts with the emerging democratic forces in Central and Eastern Europe even before the end of the Cold War. Relations were established with parliamentarians in many of the successor states of the Soviet Union including Russia and Ukraine.

The creation of an 'Associate Status' in 1991 for parliaments of Central and Eastern Europe allowed their integration into Assembly activities before the establishment of formal ties by NATO itself. The Assembly initiated a substantial programme of practical assistance to the partner parliaments with a particular focus on the development of appropriate civil-military relations.

These activities reinforced and in many areas became an integral part of NATO's own efforts through its Partnership for Peace Programme (PfP) to assist former adversaries as they made the difficult and painful transition to democracy and market economies.

The Assembly’s programme of specialised seminars and training programmes for parliamentary staff initiated in 1990 by then President of the Assembly Congressman Charlie Rose and Senator William Roth, provided timely practical assistance in the development of parliamentary mechanisms, practices and 'know how' essential for the effective democratic control of armed forces. The Rose-Roth Initiative remains today the Assembly’s primary tool for engagement with delegations from non-NATO member countries.

By integrating parliamentarians from non-member nations into its work, the Assembly helped build bridges with the new political forces in countries of the former Warsaw Pact, and assisted in the development of parliamentary democracy throughout the Euro-Atlantic area.

The Assembly became actively involved in the process of NATO enlargement as a substantial majority of members consistently demonstrated their support for the "open door" policy. In parallel, aspirant countries used the Assembly as a channel to build support for their integration into Euro-Atlantic structures.

The requirement for parliamentary ratification gave an additional emphasis to Assembly debates on enlargement. The Assembly was directly concerned with assisting in the process of ratification of the Protocols of Accession signed at the end of 1997, which culminated in the accession of the Czech Republic, Hungary, and Poland to the Alliance in March 1999. At the historic Madrid Summit, in which those three countries were formally invited to accede to NATO, then the Assembly President, US Senator William Roth, addressed NATO Heads of State and Government. The invitation from NATO leaders to Senator Roth represented a tacit acknowledgement that the Assembly had played a key role in paving the way to enlargement, and would have a central role in encouraging parliamentary ratification of enlargement.

The Assembly was renamed “NATO Parliamentary Assembly” in 1999 to take into account the profound transformation it had undergone since its creation. At the Annual Session in November 2004 in Venice, Italy, which marked the beginning of celebrations of the Assembly’s 50th Anniversary, the entire North Atlantic Council for the first time joined members of the Assembly for a special plenary meeting.

The Evolution of Relations with Russia and Ukraine

Mirroring the creation in Rome (May 2002) of the NATO-Russia Council, a major step forward in NATO's co-operation with Russia, the Assembly created the NATO-Russia parliamentary Committee (NRPC) which replaced the Joint Monitoring Group.

The NRPC met twice a year “at 29” during the Assembly’s Sessions.

In 2002, the Assembly also decided to upgrade its special relationship with Ukraine by creating the Ukraine-NATO Inter-parliamentary Council (UNIC). The UNIC monitors the development of NATO–Ukraine relations, with a particular focus on the parliamentary aspects of Ukraine’s defence and political reform. The Council meets biannually, once in Ukraine and once in Brussels.

During the Ukrainian Presidential elections in 2004, which led to the “Orange Revolution”, members of the NATO PA participated in the international election monitoring effort. Since then, the Assembly has been invited to monitor all presidential and parliamentary elections in Ukraine.

Following Russia’s military intervention in Ukraine and decision to annex Crimea in March 2014, regular institutional relations with the Russian Parliament, including in the framework of the NRPC, were broken off.

Reaching out to the Mediterranean and the Middle East

The increasing attention to security in the Mediterranean region in the 1990s culminated in 1996 with the creation of the Assembly's Mediterranean Special Group (GSM), a forum for co-operation and discussion with the parliaments in the Middle East and North Africa (MENA) region focussed on political, economic, social and security issues.

Georgia became an Associate Member of the Assembly in May 1999, and since then members of the Georgian delegation have participated in the many types of activities open to the Assembly’s partners. Since 2002, Georgia has initiated an extensive reform programme, and actively pursues NATO membership. Through its cooperation with the Georgian Parliament, the Assembly supports Georgia’s reform agenda, and its efforts to prepare for eventual membership into the Alliance.
Following the August 2008 conflict in Georgia, the Assembly decided to strengthen its institutional relationship with the Georgian Parliament by creating the Georgia-NATO Inter-parliamentary Council (GNIC).

A Growing Network of Partners

Over the years, the Assembly has developed formal and informal relations with a growing number of parliaments in Eastern and South Eastern Europe, Central Asia, the Mediterranean and Middle East, and all the way to the Pacific. Today, some 30 parliamentary delegations participate in various Assembly activities.