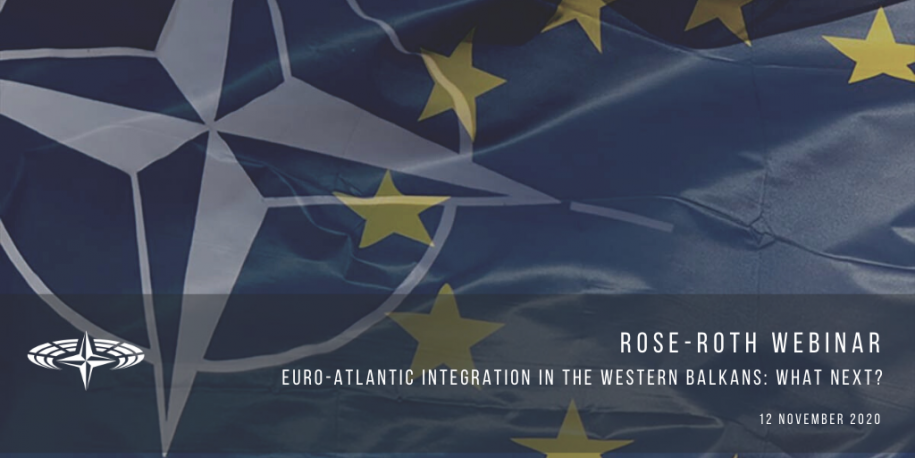 Ahead of a pivotal EU meeting on enlargement, over 130 participants from Allied and partner nations discussed progress on Euro-Atlantic integration in the Western Balkans with Olivér Várhelyi, the European Union Commissioner for Neighbourhood and Enlargement, and James Appathurai, NATO Deputy Assistant Secretary-General for Political Affairs and Security Policy. The meeting was organized with the support of the Swiss government and also featured Ambassador Philippe Brandt, Head of the Swiss Mission to NATO.

“The Western Balkans are a key priority for the Alliance as well as the NATO Parliamentary Assembly.

Because the region’s security, stability and future is inextricably linked with ours,” opened Attila Mesterhazy, President of the NATO Parliamentary Assembly (NATO PA).

“2020 is already a year of important milestones for the region”, continued Mr Mesterhazy. “Of course, all is not perfect, and the COVID-19 crisis has added to the list of existing challenges”. However, “[i]t is clear the people in the Western Balkans look to the Euro-Atlantic institutions for their future (…) It is equally clear that it is in our interest, in the common interest of NATO and the EU, to anchor the Western Balkans firmly into our Euro-Atlantic community of nations and help bring about lasting stability and prosperity across the region.”

In March, the Republic of North Macedonia became NATO’s 30th member, and EU ministers for European affairs also gave their political agreement to the opening of EU accession negotiations with North Macedonia and Albania. Sustained engagement by the United States and the European Union were also instrumental in revitalising dialogue between Belgrade and Pristina in July.

In his opening remarks, Commissioner Várhelyi, told the audience that “The Western Balkans are a priority for the EU. We share the same history, the same destiny, and it is in our strategic and security interest to bring the region closer to the EU.” The Commissioner continued by noting the EU’s consistent political, economic, and security engagement in the region. This support, he said, has been bolstered by the announcement in October of the Economic and Investment Plan for the Western Balkans, which will inject EUR 9 billion in grant funding into the region and will be complemented by the Western Balkans Guarantee facility, which can assist with raising additional investments of up to EUR 20 billion.

Mr Appathurai echoed the Commissioner’s assertion that the Western Balkans remain a strategic priority for the Euro-Atlantic community and said NATO is committed to finding new ways to enhance engagement with the region. He underscored the benefits of NATO’s open door policy. In addition to stronger defence institutions and increased foreign direct investment, “membership also provides a positive platform to address political concerns and drive progress on legacy political and security challenges in the region.” He said that NATO would continue with its engagement policy to help strengthen channels for mutually beneficial cooperation in the region,  focusing in particular on Bosnia and Herzegovina, Serbia, and Kosovo.

Ambassador Brandt also addressed the members of parliament. The Swiss government is a long-running backer of NATO PA partnership programmes and generously supports Rose-Roth seminars and webinars which assist partners in their democratic transitions, reform processes, and Euro Atlantic aspirations.