Azerbaijan: A key strategic partner for the West in an unstable region 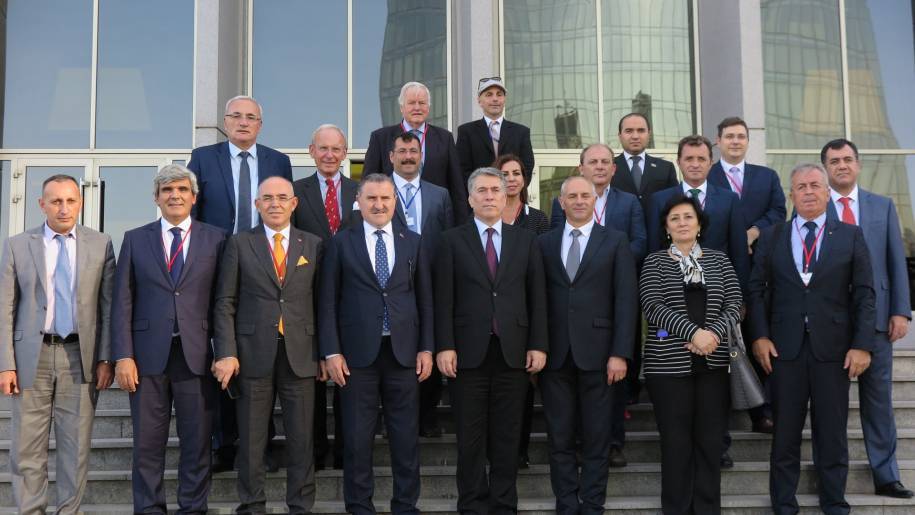 Brussels/Baku, 18 September 2018 - Azerbaijan has emerged as a key strategic partner for Europe. The much-anticipated completion of the Southern Gas Corridor in 2020 would mark a major step in diversifying the energy supply base of southern Europe. That project would bring significant quantities of gas from Azerbaijan’s massive offshore Shah Deniz field to Turkey and Europe, helping the continent diversify its base of energy imports and reduce its dependence on Russian gas. The close economic and strategic partnership between Europe and Azerbaijan was a central theme of meetings NATO PA President Paolo Alli (Italy) and a delegation of the Economics and Security Committee held in Baku from 12-14 September.

Azerbaijan’s foreign and security policy is strongly conditioned both by its geographical position and the ongoing conflict with Armenia over Nagorno Karabakh. Azerbaijan has tied itself economically to the West where it sells most of its energy and with which it is forging a range of energy, transportation and trading links. It also enjoys particularly close relations with Turkey.

At the same time, the government is strongly mindful of its powerful and economically important neighbours Russia and Iran. Azerbaijan is thus compelled to play a balancing game in an unstable part of the world. While it has an important partnership with both NATO and the EU, it does not harbour ambitions for accession to either organisation, in contrast with its neighbour Georgia.

Equally, while Azerbaijan cultivates certain ties with Russia it does not seek membership in the Russian dominated Eurasian Economic Union of which Armenia is a member. Its own economic links to Russia and Iran have been rendered all the more complicated by Western sanctions regimes imposed on both countries.

Western governments recognise the difficult position Azerbaijan is in. Several observers told the delegation that the West sees Azerbaijan as an important force for strategic and economic stability in the Caucasus and Caspian regions and beyond.

“Our partnership with countries of the South Caucasus is essential because the stability of this region is linked to that of Europe”, stressed NATO PA President Alli in his meetings with Azerbaijani President Ilham Aliyev, Foreign Minister Elmar Mammadyarov, and Parliament Speaker Ogtay Asadov. Mr Alli saluted Azerbaijan’s role as a balancing point in the region and driver of economic integration, as well as its active cooperation with NATO and participation in the NATO PA. President Aliyev and Foreign Minister Mammadyarov both reaffirmed their government’s commitment to cooperation with NATO, including through increased support for NATO’s Resolute Support Mission in Afghanistan.

Azerbaijan's most compelling challenge is the situation in Nagorno Karabakh. Araz Azimov, Deputy Minister of Foreign Affairs, expressed frustration with the lack of progress on conflict resolution, and regretted that initial hopes that positive momentum could come from a new government in Yerevan had so far not materialised. He suggested that the international community needs to focus more on the issue and actively uphold principles related to the sanctity of national borders. He told the delegation that there are dozens of ceasefire violations every day and that it is simply misleading to characterise this as a frozen conflict. Other speakers noted that both sides have dug in on their positions. The delegation stressed that any progress towards resolution of the conflict would have to come first and foremost from the two parties.

On the economic front, the government of Azerbaijan has made diversification a high priority. Energy price falls exposed the national economy’s over-reliance on energy sales. But as Azerbaijan’s Minister of Energy, Perviz Sahbazov told the delegation, when gas and oil prices are too high, the conditions for diversification are undermined. He suggested that the government would like to see prices hold to a point where national revenues are adequate to the country’s needs but incentives for diversification remain sufficiently compelling. The government priority now is to build up its the agricultural, tourism, communication, transportation and information technology sectors, with promoting connectivity a key common thread. Improving educational standards represents a major component of this strategy.

The delegation also visited BP’s Sangachal Terminal and spoke with Bakhtiyar Aslanbayli, Vice-president for Communication and External Affairs and Strategy for Azerbaijan, Georgia and Turkey. While there has been great progress toward completing the Southern Gas Corridor including the finalisation of the Trans-Anatolia Natural Gas Pipeline (TANAP), the final leg of the Trans Adriatic Pipeline (TAP) from Albania to Italy is awaiting final approval by the Italian government. If approved, the project is due to be completed by 2020, bringing Azerbaijani gas to the heart of Europe.

In the longer-term there is a potential for some Central Asian gas to move through this vital infrastructure if and when a trans-Caspian pipeline is constructed. Moreover, BP officials suggested that Iran could eventually move gas through this system, but this would be hard to imagine given the current sanctions on that country. Moving gas under the Caspian is now legally feasible as the Caspian littoral countries have recently agreed a legal status governing that body of water. That agreement ends the legal limbo over the Caspian’s status. However, any littoral state could theoretically block a bilaterally agreed pipeline project by invoking an environmental clause in the new agreement.

The delegation of NATO PA’s Sub-Committee on Transition and Development consisted of 16 parliamentarians from 11 NATO member, and besides NATO PA President Paolo Alli (Italy) and Vice President Vitalino Canas (Portugal), was led by the Economics and Security Committee Chairman Ivans Klementjevs (Latvia). The delegation’s programme further included meetings with members of the Azerbaijani parliament’s delegation to the NATO PA, researchers from the Centre for Strategic Studies (SAM), Baku-based ambassadors of NATO countries, and officials from the EU, the United Nations and the World Bank. The Sub-Committee’s rapporteur, Ausrine Armonaite (Lithuania) has produced a draft report on The Energy Security Challenge in Central and Eastern Europe, and the visit generated information for the second iteration of that report to be presented at the Assembly Annual Session in Halifax, Canada.