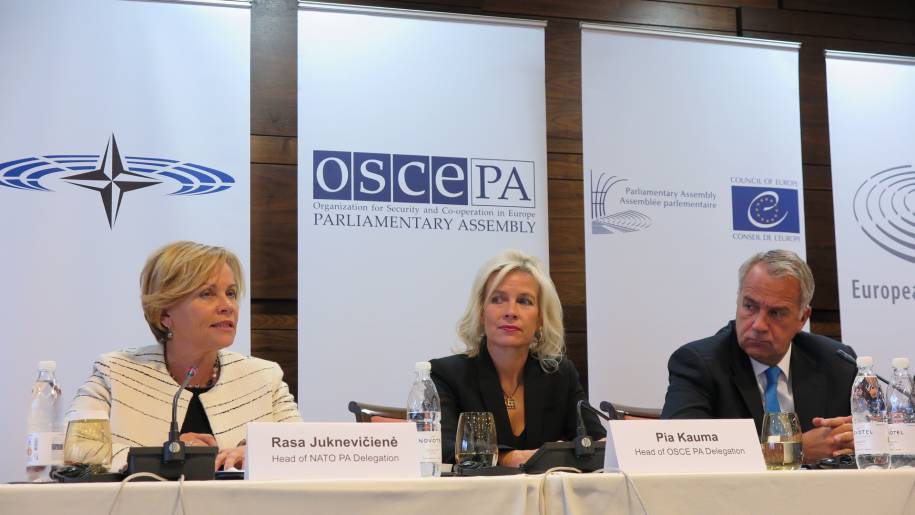 Sarajevo, 8 October 2018 – The 7 October general elections in Bosnia and Herzegovina were genuinely competitive but characterised by continuing segmentation along ethnic lines, the international observers concluded in a preliminary statement released today. Long-standing deficiencies in the legal framework remain, and recent discussions on reform were stalled by political disagreements, further eroding trust in public institutions, the observers said.

Voters were presented with a wide choice of candidates, who were able to campaign freely. The contestants, however, focused more on personal attacks and fearmongering than on providing political alternatives, the statement says. The dependence of media on political and business interests often led to biased coverage, and instances of improper efforts to influence voters in favour of incumbents were not effectively addressed, the observers said.

“We saw polling station commissions, many of them made up of young women and men, who showed eagerness to cope with the complex system during a long election day,” said Mavroudis Voridis, the Special Co-ordinator and Leader of the short-term OSCE observer mission. “The complexity and the deficiencies of the post-Dayton system should have been properly addressed a long time ago. I urge the institutions not to waste time now, but to immediately tackle the necessary reforms.”

Dame Cheryl Gillan, Head of the delegation from the Parliamentary Assembly of the Council of Europe (PACE), said: “Yesterday’s voting was calm, and electors made their choice freely among a large number of parties and candidates. The PACE delegation regrets that, once again, the elections were held in violation of the European Convention of Human Rights concerning discrimination on the basis of ethnicity and residency. The delegation also expressed its disappointment that the election campaign remained segmented along ethnic lines.”

The freedoms of speech, movement and association were generally respected, in a campaign was largely segmented along ethnic lines, with contestants resorting to polarising and negative rhetoric. There were instances of the preferential treatment of incumbents by local authorities and of the misuse of state resources, the statement says.

“We cannot change the past, but we can shape the future,” said Pia Kauma, Head of the delegation from the OSCE Parliamentary Assembly. “People of this country, and especially the younger generations, deserve more political alternatives.”

Frank Engel, Head of the European Parliament delegation, said: “Materially credible elections were held, and there will be a result. Now, the challenge for political actors in Bosnia and Herzegovina will be to ensure that the result is used in favour of the common good, and not of particular interests.”

The legal framework is generally conducive to holding democratic elections, but important long-standing shortcomings remain, as political deadlock has stalled constitutional and electoral reforms. Restrictions on the right to stand based on ethnicity and residence are contrary to OSCE commitments and Council of Europe and other international standards, and European Court of Human Rights judgments on this issue remain unimplemented.

“The fundamental issues with the constitutional and legal framework must be addressed, but what we saw yesterday was also many election administration officials committed to making the system work, and many voters committed to shaping their country’s future” said Rasa Juknevičienė, Head of the delegation from the NATO Parliamentary Assembly.

The Central Election Commission (CEC) administered the process efficiently, despite limited budget and staff, and against the backdrop of continued criticism and allegations regarding technical preparations. There was a lack of trust in the election administration at all levels and questions about its impartiality, including due to numerous credible claims that contestants were trading positions to obtain control over particular polling station commissions. Municipal election commissions acted in a more professional manner, the observers said. On election day, polling station commissions worked transparently but faced some difficulties in following procedures, particularly during counting.

The lack of transparency in media ownership and the influence of political and business interests on editorial policies raised concerns about the ability of most outlets to provide unbiased coverage, the statement says. Public broadcasters provided contestants with free airtime in the official campaign period. Media monitoring showed that Republika Srpska’s public broadcaster provided significantly more coverage to one of the state presidential candidates.

“We saw that fundamental freedoms were respected but, at the same time, there is enduring mistrust in the country’s institutions,” said Ambassador Peter Tejler, head of the OSCE Office for Democratic Institutions and Human Rights (ODIHR) election observation mission. “ODIHR’s final report will highlight the positive elements in these elections and provide recommendations to address the shortcomings we have identified.”

The observers heard repeated concerns over the accuracy of the Central Voters Register, in particular regarding deceased voters remaining on the list. The CEC took measures to improving the register’s accuracy and referred cases of suspected fraud in postal voting registration to the prosecutor’s office.

Gender equality was not a prominent element in the campaign, including when social and family issues were discussed. Although women appeared in electoral events, they rarely campaigned on their own and women candidates were not actively promoted by political party structures, nor covered extensively in the media, the statement says.

Mechanisms for complaints and appeals are in place and provide for timely consideration, including through judicial review. However, a restrictive interpretation by election commissions in deciding which complaints are admissible meant effective remedies were denied and alleged irregularities went unaddressed. The CEC reviewed a number of complaints in public sessions and maintained a register of these, but the transparency of the process remained an issue. It provided the reasoning for its decisions, which were usually adopted by consensus, so as to maintain the overall ethnic balance in the CEC’s approach to dispute resolution.