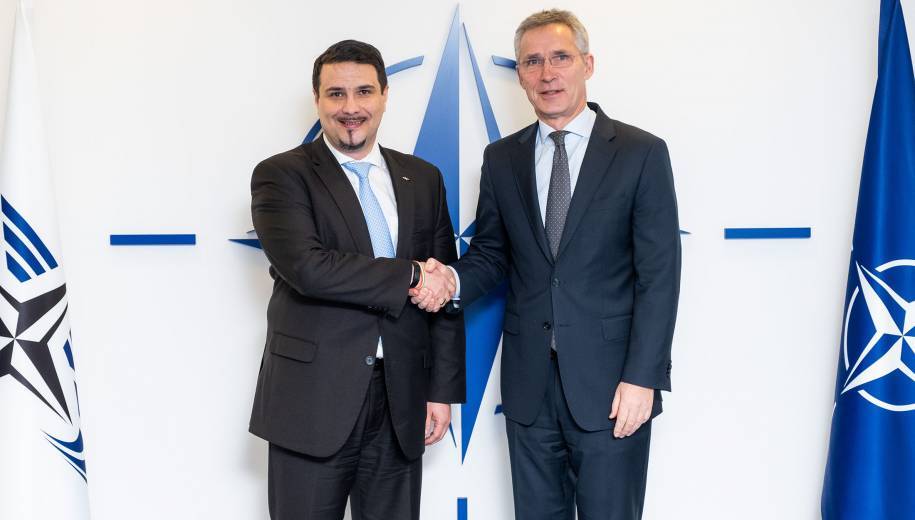 Brussels, 19 February 2020 – An annual high-level meeting of the NATO Parliamentary Assembly (NATO PA) in Brussels, including Acting President Attila Mesterhazy (Hungary) and members of three of the Assembly’s Committees, sent a strong message of Alliance unity in the face of mounting global challenges, ranging from the continuing violence in the Middle East to the emergence of new global players and potentially disruptive technologies. In a sign of strong bipartisan congressional support for NATO, the Speaker of the United States House of Representatives Nancy Pelosi led a large US Congressional delegation.

The parliamentary gathering kicked off on Monday with a meeting between President Mesterhazy and NATO Secretary General Jens Stoltenberg, followed by the annual exchange between the NATO PA and the Alliance’s governing body – the North Atlantic Council (NAC). Speaker Pelosi also addressed the 120 legislators from 26 NATO countries gathered at NATO Headquarters for this event.

Addressing Assembly members for the first time since his nomination, Acting President Mesterhazy reaffirmed the Assembly’s commitment to the transatlantic bond and the values underpinning NATO. “I want to ensure that our Assembly carries the powerful message that NATO is not just a political-military organisation, but also an alliance of democracies. Along with political unity and military strength, our commitment to shared values is what makes NATO a unique community of nations”, Mr Mesterhazy said.

He also stressed the need to strengthen the political dimension of the Alliance to ensure Allies consult on and address any differences or issues among them. In his meeting with NATO Secretary General Stoltenberg, he noted that the Assembly stands ready to contribute to NATO’s forward-looking reflection process, launched at the meeting of Allied Heads of State and Government in London in December 2019.

Over three days of meetings with the Alliance’s top officials, legislators discussed ways for NATO to play a more active role in stabilising the Middle East. They reviewed the decisions taken at the recent meeting of NATO defence ministers, including the Alliance’s plans to increase its training and capacity building mission in Iraq, taking over some of the tasks of the Global Coalition against Daesh. Participants also expressed their support for NATO’s Resolute Support mission in Afghanistan and US-led peace efforts.

The growing global role of China and the opportunities and challenges this creates for the Euro-Atlantic community was a key theme throughout the meetings, and a priority Mr Mesterhazy identified for his presidency. The country’s military modernisation as well as investments in potentially disruptive technologies such as artificial intelligence and cyber tools were seen as issues requiring particular attention. Allied nations were also advised to exercise caution when endorsing Chinese investments in their strategic infrastructure, including 5G networks.

Discussing his other priorities, President Mesterhazy stressed that there can be no return to business as usual with Russia as long as it continues its aggressive policies and called on Allied parliaments to continue to support Ukraine’s territorial integrity and Euro-Atlantic path. Other main elements of his 10-point programme included the need to counter hybrid warfare, to keep focus on unfinished business in the Western Balkans, as well as to improve communication and education about NATO.