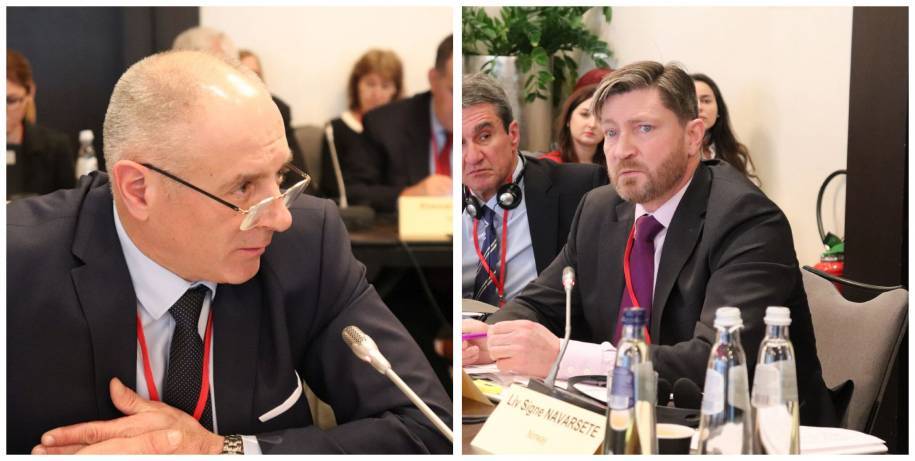 Convening for the first time ever on a digital platform, the NATO Parliamentary Assembly’s Economics and Security Committee held the first part of its annual Spring deliberations on 2 July 2020. The meeting, presided over by Committee Chairperson Ivans Klementjevs (Latvia), considered two draft reports, both by the Committee’s General Rapporteur, Christian Tybring-Gjedde (Norway): China’s Belt and Road Initiative: A Strategic and Economic Assessment and a draft Special Report on The Economic Consequences of the COVID-19 Pandemic.

Mr. Tybring-Gjedde first discussed the Committee’s draft General Report on the China’s Belt and Road initiative. He described the initiative as a “perfect expression of China’s global economic, diplomatic, and strategic ambitions”, adding that it would shape the geopolitical landscape of the 21st century in ways that the transatlantic community cannot ignore.

The BRI is actually three inter-linked initiatives: the Silk Road Economic Belt, the Maritime Silk Road, and the ‘Digital Silk Road’. Along these corridors, a broad array of infrastructure projects is underway including oil pipelines, roads, railways, ports, and digital networks, as well as a host of industrial investments. Beijing, Tybring-Gjedde noted, sees the Digital Silk Road as a means to establish a dominant position in a number of cutting-edge sectors. But it also seeks to use the BRI to align partner nations with its regulatory frameworks and overall international vision.

Mr. Tybring-Gjedde pointed to several specific risks the project poses to the West. These include allegations that the BRI funds and builds infrastructure that could be used to facilitate China’s military expansion while creating new opportunities for espionage, particularly through the Digital Silk Road. It also creates debt traps through opaque lending practices. The scant attention Beijing pays to environmental sustainability risks creating long-term environmental hazards.

Questionable labour practices and Beijing’s blind eye to corruption are also deeply concerning, Tybring-Gjedde noted. The project, he told the Committee, is weakening international efforts to improve good governance  not only in developing countries, but also in the West.

The rapporteur explored several of the specific challenges to the transatlantic community.  China, he said, is pursuing a divide and conquer strategy in Europe through the BRI. While Washington sees China primarily as a rising power aiming to challenge its preeminent global position, for many in Europe, China offers commercial opportunities while also posing competitive threats. He added that “Allied countries will accordingly need to agree on a common approach towards China so that it does not become a fault line within NATO”.

The COVID-19 pandemic has brought some of these tensions into greater relief.  Mr Tybring-Gjedde pointed out that the US Administration has been very focused on China’s lack of transparency in the early stages of the pandemic. While many European governments share this concern, they express this concern in a different manner.

The rapporteur concluded by calling for the transatlantic community to hold out another model of development and investment based on principles of transparency, sustainability, and liberal market principals including free trade, and good governance. “We should all work to promote these values and to encourage China to embrace them as well”, he said.

The second half of the meeting was dedicated to Mr. Tybring-Gjedde’s special report The Economic Consequences of the COVID-19 Pandemic. He argued that pandemics act as negative exogenous economic shocks. These shocks can profoundly affect supply, demand, monetary and fiscal conditions. They can induce dramatic contractions in output, investment, spending, employment, and trade. The share of population infected, the number of work weeks lost, and the morbidity rate all determine the depth of the crisis.

Measures undertaken to minimise the impact of the pandemic can also undermine the economy, at least over the short term. “Lockdowns buy time”, Tybring-Gjedde told the Committee, by lowering pressure on health care facilities and workers and reducing rates of infection. But they can also shut down national economies. He warned that failing to generate social consensus around government measures to combat a pandemic will likely increase the duration of the medical crisis and even unleash political unrest.

Pandemics also have a very negative impact on trade, particularly once governments essentially shut down commercial activities and close borders. Meanwhile, the collapse of consumer spending exacerbates the recessionary effects of pandemics. The rapporteur told the Committee that falling consumer demand, lockdowns, collapsing trade and a Russian-Saudi oil price war have all struck a hard blow at energy markets which have been plagued by plummeting prices. The banking sector is also teetering on the edge, particularly given the substantial amount of debt that companies and governments held in the run-up to the crisis.

The speaker then explored government responses to this burgeoning crisis. He noted that central banks can counter this by keeping interest rates low and by offering collateralised lending to the financial system. But there are risks, he added. Government balance sheets have substantially worsened, and there is a mounting moral hazard in which firms come to assume that governments will always willingly bail them out. This risk, however, is now outweighed by the systemic threat posed by the potential spiral to depression, Tybring-Gjedde asserted.

Tybring-Gjedde’s presentation concluded with a strong plea for deeper international collaboration. No country can resolve either the medical or economic crisis on its own, he said.  Deepening international collaboration is not an objective driven by some internationalist idealism, but rather by a clear understanding of how best to defend national interests in a globally integrated economic order. It will also be essential to preserve an open trading order, he added.

There are lessons to be learned in the midst of this crisis. Most obviously, failing to prepare for future pandemics could well prove catastrophic. The speaker called for a rethinking about “how we collectively define national security, because the damage that pandemics can potentially inflict are not so dissimilar to the impact of war or civil strife”.

He finally noted that NATO member governments and parliaments should rededicate themselves to preserving the 2% of GDP defence spending commitments to which all NATO governments have signed up.

The Economics and Security Committee will convene a second digital meeting in early September. At that gathering, Ausrine Armonaite (Lithuania) will present her draft report on The Black Sea Region: Economic and Geopolitical Tensions, and Jean-Marie Bockel (France) will discuss his draft report on The Gulf Crisis and Global Energy Markets. These reports, along with the two reports by Christian Tybring-Gjedde, will be revised over the summer for their second and final reading at the Annual Session of the NATO PA, which will be held in Athens, Greece.