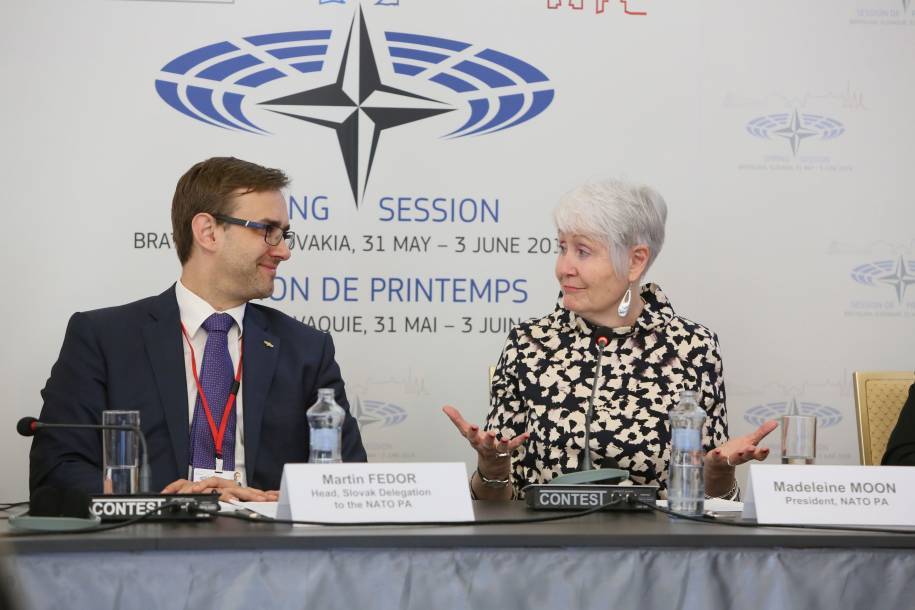 Bratislava, 31 May 2019 – Defence of NATO’s core values is essential at a time when the Alliance marks its 70th anniversary and is confronted by a range of new external and internal challenges, Madeleine Moon, President of the NATO Parliamentary Assembly said Friday as the NATO PA opens its Spring Session.

Mrs Moon spoke as parliamentarians from NATO and partner nations gathered in Bratislava for four days of talks to discuss pressing security issues ranging from arms control and nuclear deterrence to the military implications of Artificial Intelligence; Russia’s ongoing aggression against Ukraine to security and stability in Africa.

The lawmakers will also debate NATO’s fitness for purpose as the Alliance celebrates the 70th anniversary of its founding Washington Treaty with a renewed emphasis on the need to strengthen the Alliance’s founding principles of mutual defence.

“Now we are returning to the basic principle of NATO, to the basic mission of NATO. We are more and more focused on the capacity of NATO to be able to defend ourselves in terms of security in any dimension, from any corner of the world. We need to be sufficiently allied, sufficiently united to defend ourselves jointly,” said Martin Fedor, Head of the Slovak Delegation to the NATO PA. “It is very important to send a very clear signal to the Slovak public that we have our partners, that we have allies, we have our friends with whom we are on one mission and we are capable and willing to defend ourselves jointly,” Fedor added.

Over the four days, almost 250 lawmakers from the 29 NATO nations - plus 22 associate and observer countries - will take part in the talks held in Bratislava Castle overlooking the Slovak capital.

NATO PA brings together national parliament members from Allies as well as partner countries, observers and organisations. It is an essential link between the Alliance and member parliaments - and therefore with citizens in the Euro-Atlantic area.