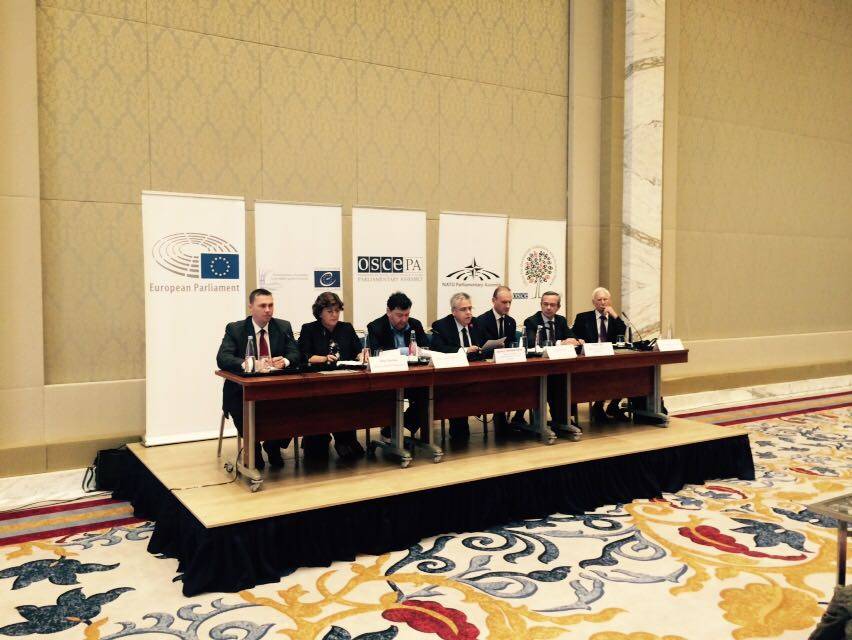 Tbilisi, 9 October 2016 - The 8 October parliamentary elections in Georgia were competitive, well-administered and fundamental freedoms were generally respected. The otherwise calm and open campaign atmosphere was, however, impacted by allegations of unlawful campaigning and some incidents of violence, the international observers concluded in a preliminary statement released today.

Strongly competitive and well-run, yesterday’s elections offered an opportunity for voters to make informed choices about their options in a pluralistic but polarized media environment” said Ignacio Sanchez Amor, the Special Co-ordinator and leader of the short-term OSCE observer mission. “The unacceptable isolated incidents of violence we’ve seen had an impact but, thankfully, did not undermine an otherwise positive election."

“Yesterday’s parliamentary elections were competitive. Nevertheless, during the pre-election period, there was unacceptable behavior directed towards candidates and voters. Such behavior should never happen. Moreover, there was a substantial imbalance in the funding parties were able to raise, leading to unequal opportunities,” said Emanuelis Zingeris, Head of the PACE delegation. “Before drawing final conclusions on the electoral process, the PACE delegation will closely follow the electoral period leading to the second round, and will wait for the results of that round in a number of majoritarian districts.While contestants were able to campaign freely, several parties made allegations of political pressure on candidates and campaign staff. The tone of the campaign between the two leading parties was confrontational and permeated the election atmosphere, the statement says. There were reports of the misuse of state resources and of unlawful campaigning.

As election observers, we hoped for calm, uneventful elections in which voters focus on the results rather than the process. In many respects, the elections have lived up to our expectations, with voters focusing primarily on the country’s future and getting there through competitive elections,” said Guglielmo Picchi, Head of the OSCE PA delegation. “We call for responsible behavior as the country moves forward with the second round of the elections.Twenty-five parties and blocs were registered for the proportional ballot and 816 candidates in majoritarian contests. While voters could select from a wide range of contestants, late changes to political party legislation impacted the registration of some parties and the inclusiveness of the registration process. Seven of nine eligible parties met the non-binding gender quota, and there were 143 female majoritarian candidates, the observers said.

This statement shows that there were some shortcomings in the campaign environment. The big picture, however, is clear: Georgia has reaffirmed its status as the leader of democratic transformation in this region,” said Paolo Alli, Head of the NATO PA delegation. “The conduct of this election is greatly encouraging for all those who support Georgia on its path towards Euro-Atlantic integration.“It is the responsibility of all political actors, but mostly the competent authorities to do everything in their power to defuse tensions, while the role of the media and civil society is to hold them to account, and the duty of the international community is to monitor closely all of these efforts” said Ana Gomes, Head of the EP delegation.

The election administration worked in a timely and professional manner, and there was a high level of confidence in the Central Election Commission among electoral stakeholders. More than half of all election commission members were appointed by political parties. Allegations persisted throughout the campaign that commissions lacked impartiality when appointing the remaining lower-level commission members, the observers said.

Media legislation provides a sound framework for the freedom of media. The media landscape is pluralistic, but individual media outlets are perceived as polarized, and media monitoring showed that some broadcasters lacked balance in their news and current affairs coverage.

The legal framework is conducive to holding democratic elections. Late amendments impacted electoral operations and the campaign. Recent legal changes also resulted in the drawing of new constituency boundaries – aimed at reducing differences in the numbers of voters from one constituency to another – but some significant deviations remain and the legal changes neither set sufficient parameters for determining boundaries nor established procedures for future review, the statement says.

“Our long-term observation showed that fundamental rights were respected during a competitive campaign and that the election administration earned the trust and confidence of electoral stakeholders,” said Ambassador Alexandre Keltchewsky, Head of the OSCE/ODIHR long-term election observation mission. “Further steps should and can be made to address remaining challenges, both in the laws and in practice.”

There is increased trust and confidence in the accuracy of the voter lists amongst election stakeholders, and election commissions gave voters ample opportunity to verify their information.

Amendments to campaign finance regulations only partially addressed past recommendations for a more uniform legal framework and proportionate and effective sanctions for infringements. Partially due to new procedures requiring the State Audit Office to obtain court approval for investigations, campaign finance violations were often not addressed in a timely manner, undermining the effectiveness of oversight.

The Election Code establishes a timely dispute resolution process for appeals of election commission decisions, but limits voters’ right to appeal. Complaints were reviewed transparently by commissions and courts in open sessions. The lack of an expedited deadline for taking administrative action in the case of electoral offenses and insufficient resources for investigations limit the effectiveness of this remedy.