Georgia moves closer to NATO, but there is more work to do 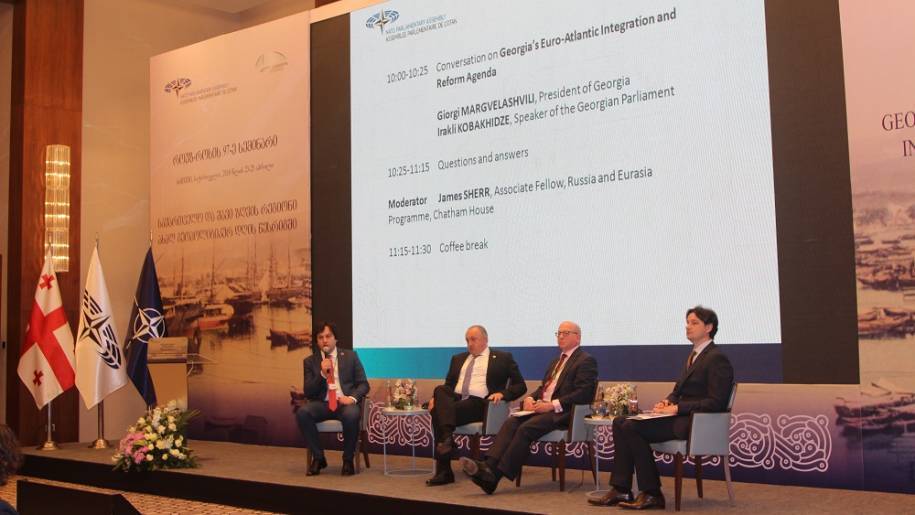 Batumi, 27 April 2018 - Although it has been ten years since NATO allies communicated that Georgia would one day become a NATO member, it has not yet been invited to join the Alliance, even though between 70 and 80% of the public now support the idea.  Through public education programmes and dialogue, democratic forces in the country, with the support of NATO, have worked to transform this sentiment into a more resilient and informed form of support. Greater resilience is critical, particularly given the persistent Russian campaign to chip away at these pro-Western sentiments both by sowing dissension and attacking western values through fake news and other forms of hybrid war.

Paolo Alli, President of NATO PA, and Mikheil Janelidze, the Minister of Foreign Affairs of Georgia, noted that this year marks the 100th anniversary of Georgia’s initial declaration of independence from the Russian empire. Independence was short-lived as Georgia had little international support in the face of the Red Army. They said that history should serve as a reminder of the need for greater solidarity in the free world.

Giorgi Margvelashvili, the President of Georgia warned delegates that Russian President Vladimir Putin has declared that his country is in midst of a super power stand-off and is engaging in a series of proxy wars. He said that NATO needs to deal with this reality and should not create vacuums which might invite conflict. Rather it should consolidate those territories that are already in the liberal democratic camp.  “We need to lock down the area of freedom,” he said, if you do not move fast, these territories will be lost.” He also stressed the importance of EU solidarity which have taken the form of an Association Agreement, visa free travel, and a free trade regime.

Despite coping with a hostile neighbour that currently occupies part of its territory, Georgia has made significant progress in its democratic, economic and security sector transition since the Rose Revolution. There are, however, persistent concerns related to poor relations between government and opposition. The net impact of these divisions is to slow reform, undermine public faith in national governing institutions, lower resilience in the face of a persistent Russian campaign to foster political alienation and cultivate anti-liberal ethno-nationalist forces hostile to the West.  These divisions along with hesitations in some NATO member countries have slowed Georgia’s integration into Euro-Atlantic structures, although there are expectations that the coming NATO summit will signal a more rapid pace of integration.

At that seminar, Ana Natsvlishvili, Parliamentary Secretary of the President of Georgia, suggested that the most recent redrafting of the country’s constitution represented a missed opportunity insofar as opposition concerns have not been adequately incorporated into the state’s new legal architecture.  The politicization of the judiciary, political interference with the media and the criminalisation of the political opposition, or at least part of it, also remain a concern for NGO’s and international observers despite the important strides the country has made. Significantly more work needs to be done on all these fronts.

Russia has also instrumentalised its occupation of Abkhazia and South Ossetia by nurturing frozen conflicts that unsettle Georgia’s borders with its neighbours, thereby ensuring that Georgia, through no fault of its own, is unable to meet one of the ostensible preconditions for membership in NATO. Georgian leaders told participants that this border problem should not disqualify Georgia from serious consideration for membership.

Several speakers noted that the conflicts over South Ossetia and Abkhazia are not entirely frozen as there are myriad incidents along the administrative control line, some of which are violent. Erik Hoeeg, Head of the EUMM in Georgia, noted that Russia is also heavily militarizing its presence in both of these regions. Russian forces have acquired new weapons and capabilities and have one mechanized brigade in each province, which is a violation of the six-point cease fire agreement brokered by the EU. Russia is also pursuing a process of “borderization” designed to cement the view that these regions will never be returned to Georgia and could eventually be incorporated into Russia—a notion that is confirmed by the growing russification of education policies in the two regions.

Russia’s violation of Georgian sovereignty has had high costs for the inhabitants of the two regions who are increasingly cut off from family relations in Georgia itself, and who are also denied economic and educational opportunities while being stripped of basic political and human rights. A climate of fear and oppression is apparent in both regions and the situation has been made worse by persistent Russian efforts to drive powerful wedges between the ethnic groups living in the two regions. Ketevan Tsikhelashvili, the State Minister for Reconciliation and Civic Equality in Georgia, warned that Russian policy is endangering the identity of the people from Abkhazia and South Ossetia. She noted that the Georgian government both recognizes that the problem cannot be solved by violence and that it needs to create venues for dialogue, support services and economic development to begin to address the very serious problems in the region.

The seminar’s keynote speaker, Roy Allison, a Professor of Russian and Eurasian International Relations at Oxford, noted that an economically stagnant Russia will lack the resources to pursue simultaneously expansion in to the post-Soviet space while achieving its more global ambitions. It has none of the dynamism of its partner and competitor China which will eclipse Russia in some of the regions where Russia harbours strategic ambitions.

James Sherr, an Associate Fellow at Chatham House, said that Russia cannot accept  the notion that independent countries on its border can ever be friendly countries. Moreover, the Kremlin sees the West today as an extension of the Holy Roman empire and cannot conceive of the notion that the West might be a values based concept that goes beyond those historic borders. This mind set obviously colours Russia’s relations with the Southern Caucuses as well as with the Baltic states and Ukraine.

Konstantin Eggert, a Russian journalist, noted that Russia’s economic model is failing and this it cannot reform that economy without threatening the current political order. The Kremlin now bases its legitimacy on the promise of restoring a Russian imperium, although whether this will be restricted to its so called near abroad in regions that once were part of the Soviet Union or if it has a more global reach into the Middle East, for example, is not yet clear. In either case, the Caucuses will hold a special interest for Russia insofar as it lies within the confines of what was once Soviet territory and because it provides a natural bridge to the Middle East. For this reason, Russia will continue to see Georgia’s Euro-Atlantic ambitions as both illegitimate and a threat to its own ambitions.

The meeting was entitled “Georgia and the Black Sea Region in the New Geopolitical Order” and it was the 97th Rose-Roth seminar of the NATO PA. The event was organised jointly with the parliament of Georgia and with the support of the Swiss Government and the Geneva Center for the Democratic Support of the Armed Forces (DCAF). The seminar brought together approximately 200 participants, including 69 members of parliament from 23 NATO member states and partner countries.