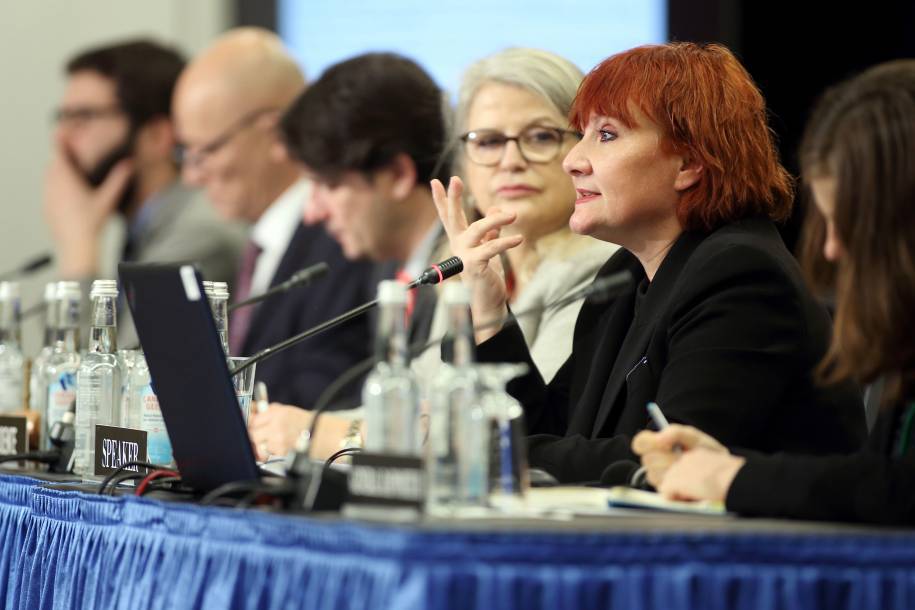 Halifax, Canada, 19 November 2018 – Women are playing an increasingly high-profile role in NATO, but greater efforts are needed to advance gender mainstreaming in peace and security, lawmakers from across the Alliance said this week.

“An objective will be to build on our commitment to women in peace and security,” said Madeleine Moon, the British Member of Parliament elected president of the NATO Parliamentary Assembly on Monday.

“We have achieved so much in this area in this decade and I want to ensure that we remain in the vanguard of promoting awareness of the invaluable work women do for our collective security,” she added.

Earlier, Clare Hutchinson, the NATO Secretary General's Special Representative for Women, Peace and Security (WPS), pointed out that 12% of personnel in NATO deployments are women. “This is not enough, but we are getting there,” she said. “We need to mainstream gender in all aspects of our work.”

Ms Hutchinson joined a panel discussion Sunday in the  Assembly’s Committee on the Civil Dimension of Security, presenting programmes to mainstream gender aspects in all NATO activities; promote gender balance in the military and political structures; and tackle sexual abuse and harassment in NATO deployments.

Since 2007, the NATO PA has mapped the contribution of parliaments to advancing the WPS agenda. Audrey Reeves, Assistant Professor at Virginia Polytechnic Institute and State University, presented the latest findings showing that parliaments are reporting a greater and more diverse spectrum of contributions to the WPS agenda.

The Committee’s chairperson Senator Joëlle Garriaud-Maylam from France highlighted the importance both of more women-orientated measures in development - most notably in education - to win the peace in warring countries and of involving more men in implementing WPS agenda. She suggested that examples of best practices in this area mentioned in the report should be replicated in all Allied parliaments.

Gender issues were repeatedly raised during the four-day NATO PA Session in Halifax. “We firmly believe that gender equality and the empowerment of women and girls are essential to building real and lasting peace in Iraq and Syria,” Canada’s Defence Minister Harjit Singh Sajjan told the Assembly.

NATO Deputy Secretary General Rose Gottemoeller highlighted the importance of pragmatic projects, such as NATO’s support for the construction of Women’s Police Town in Afghanistan, a complex designed to ensure that Afghan policewomen have a safe, secure environment to fully integrate into the police force.