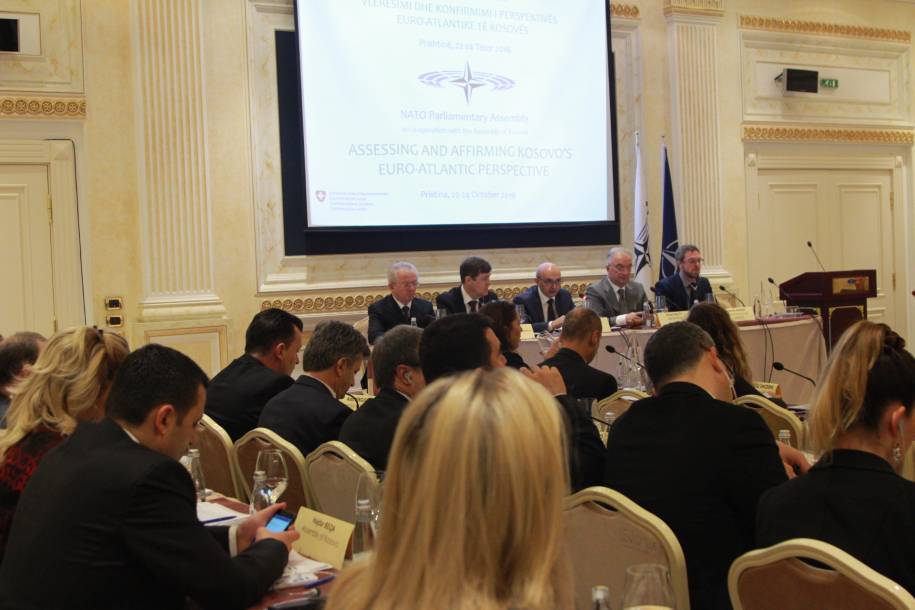 Pristina, 24 October 2016 - The NATO Parliamentary Assembly, in cooperation with the Assembly of Kosovo, gathered NATO member state and partner parliamentarians in Pristina from 22-24 October to discuss the key dynamics affecting Kosovo and the Western Balkans. Pristina’s determination to continue with domestic reforms and to maintain its constructive dialogue with Belgrade highlighted the weekend, while the specter of persistent socio-economic as well as regional political challenges to further Euro-Atlantic integration reminded assembled participants that much work remains to guarantee the rule of law, essential freedoms for citizens, as well as regional economic integration.

Kadri Veseli, President of the Assembly of Kosovo, noted in his opening remarks that there is a common desire among regional lawmakers to “remove the stigma of the Western Balkans as a troubled region of Europe.” Kosovo President, Hashim Thaci, reinforced the sentiment by stating bluntly: “Kosovo is no longer a source of instability, but is now exporting peace, dialogue, and cooperation. Occasions like this give us a chance not only to demonstrate this, but also to learn where we still need to go.”

Addressing concerns that the EU may be distracted from the ongoing issues in the Western Balkans, Nataliya Apostolova, Head of the European Union Office in Kosovo/European Union Special Representative in Kosovo, stated clearly: “The challenges are there, but [EU enlargement] is an irreplaceable tool to help build peace and stability in regions that need it the most…it remains a beacon of hope”. She continued by stating that the prospect of EU integration was not without its challenges: “We will not let up in our fight for the rule of law, and our struggles against corruption, organized crime, and discrimination.”

US Ambassador, Greg Delawie, echoed this message. Noting the impending accession of Montenegro into the NATO, Ambassador Delawie continued: “Montenegro is joining soon and a clear example of the strength of the Open Door policy and a positive signal to aspirant countries – with hard work and enduring reforms, they too can become members of NATO.”

Over the three-day conference high-level regional and international officials as well as subject matter experts weighed in a range of topics key to the security and stability in Kosovo and the Western Balkans, including: local and regional integration and reform processes; the Belgrade-Pristina Dialogue; NATO’s future role in the region; security sector reform in Kosovo; regional economic policies, as well as challenges due to the recent regional refugee and migrant flows and initiatives to counter the incursion of violent extremism.

NATO Parliamentary Assembly Vice President, Paolo Alli (Italy), welcomed the progress towards normalization which had made the holding of this first Rose-Roth seminar in Pristina possible. “It is the very first seminar of its kind in Pristina.”, he stressed in his opening remarks. “As you might imagine, this seminar would have been impossible to organize just a few years ago.” He also noted that NATO’s changing role in the region was a further positive sign of normalization: “NATO continues to play an important role in the region, and all sides recognise that the presence of KFOR is still vital to contribute to a safe and secure environment as well as freedom of movement. But other international institutions now play the leading role in Kosovo. And this is a good thing in my mind.”

The three days of meetings witnessed engaged and dynamic discussions between over 40 parliamentarians from over 20 member and partner countries, 30 members of the Assembly of Kosovo, as well as high-level Kosovo government officials. The 94th Rose-Roth Seminar will be held in Sarajevo in March 2017.

A full report of the 93rd Rose-Roth Seminar will be available shortly.