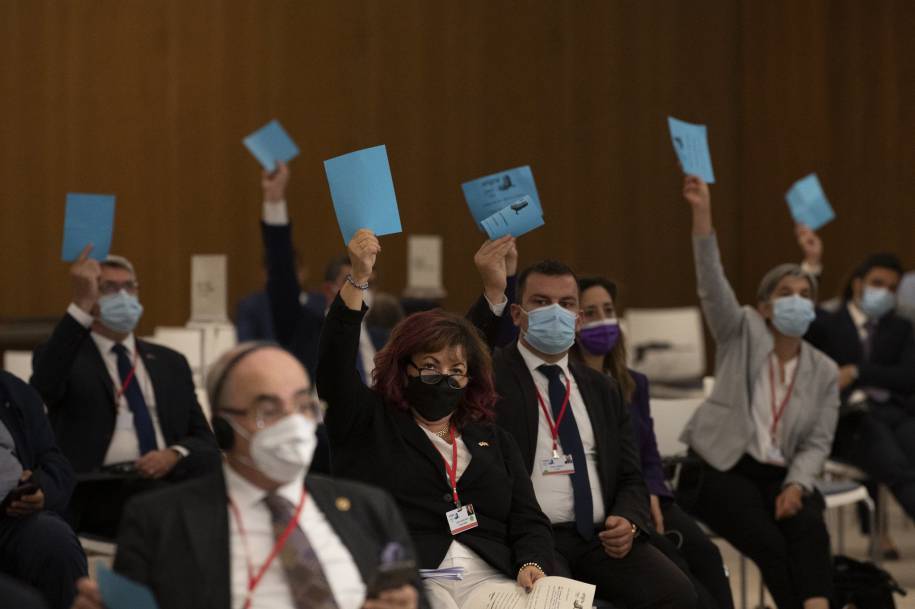 LISBON - The NATO Parliamentary Assembly, during Monday’s Plenary Sitting to close the 67th Annual Session, urged NATO Allies to set up a Centre for Democratic Resilience within NATO to protect shared democratic values and place them at the heart of NATO’s response to fast-evolving security challenges.

“What is it we’re an Alliance for? It is the promotion, empowerment, defence [and] advocacy for democracy, democratic institutions and governance. A free people exercising their free will. That’s what we are. That’s who we are,” said Gerald E. Connolly (United States), who was re-elected President of the NATO PA, which is institutionally separate from the Alliance but serves as an essential link between NATO and the parliaments as well as citizens.

“There must be an institutional, organizational commitment to that as a resource centre within NATO itself,” the President said at the session, which brought together some 250 parliamentarians from NATO member states and partners and laid the foundation of the Assembly's contribution to NATO’s next Strategic Concept – its mission statement and roadmap – which Allied leaders will endorse at a summit in Madrid next year.

The Speaker of the US House of Representatives, Nancy Pelosi, said that such a centre at NATO is “necessary because of autocracy raising its head and challenging democracy in many places, as well as the corruption that frequently goes with autocratic rule.”

In a speech at the Session in Lisbon after receiving an award for “Women for Peace and Security,” Speaker Pelosi said that such a centre would be “a furtherance of NATO’s purpose.”

NATO Secretary General Jens Stoltenberg praised the legislators for putting the spotlight on shared values. He said “the new Strategic Concept is a way for us to recommit, but also step up when it comes to addressing our democratic values, and we should work on your proposal.” Secretary General Stoltenberg noted that NATO operates on consensus and that all 30 Allies must endorse such a proposal for it to happen.

US Assistant Secretary of State for European and Eurasian Affairs, Karen Donfried, said that preserving democracy should be central to the drafting of that key document.

“Nothing will be more essential to our success than unity among like-minded democracies,” Donfried told the Assembly. “Democracies must show that they can deliver for their own people, and people everywhere, at this vital moment.”

In a resolution adopted at the Plenary Sitting, the legislators urge NATO and its members to put democratic resilience at the centre of discussions about the Alliance’s future.

They call on Allies to “reaffirm their individual and collective commitment to common shared values by creating a Centre for Democratic Resilience within NATO that can support the Allies in strengthening their democratic systems and institutions.”

In a separate resolution on preserving unity, legislators call on Allies to increase political consultations and re-affirm the “transatlantic commitment to the shared principles of democracy, individual liberty, human rights, and the rule of law, which are enshrined in the North Atlantic Treaty.”

They say a Centre for Democratic Resilience should “serve as a resource to monitor threats to democracy and assist Allies and partner nations, upon request, in strengthening their resilience to these threats.”

Legislators pointed to the challenges posed to shared democratic values from external enemies of democracy, notably the autocratic regimes in Russia and China, as well as by internal proponents of illiberalism.

The way disinformation undermines democracies was addressed in a report by Congresswoman Linda Sanchez, acting head of the US delegation. It notes that propaganda and fake news can only be fought on a united front. “No one actor or measure can solve the problem entirely, but together they can create a sound basis to reinforce the resilience of our democratic societies to hostile information activities,” it said.

Countering the threat posed by disinformation requires “all actors within the Alliance and beyond [to] take decisive steps to rededicate themselves to and bolster public support for liberal values, rebuild the strained social contract of our societies, and restore trust in democracy,” the report said.