Members of US delegation brief European, Canadian counterparts on US Congress, Administration Priorities 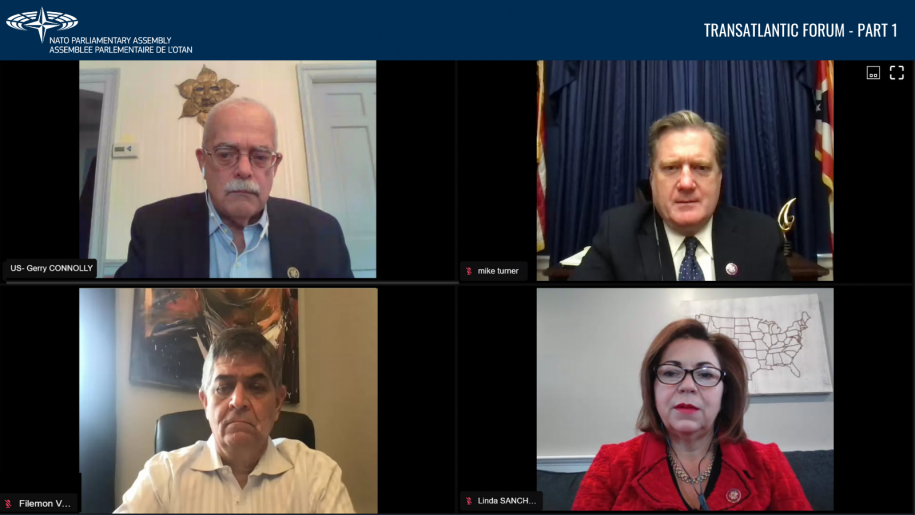 Members of the United States delegation to the NATO Parliamentary Assembly (NATO PA) came together with their counterparts in Europe and Canada today to review the priorities of the new US Congress and new Administration, two weeks after the inauguration of Joseph R. Biden as the United States’ 46th President.

The meeting, which brought together 68 lawmakers from 19 NATO countries, was held in the framework of the Parliamentary Transatlantic Forum, a yearly event focused on the United States’ foreign policy priorities organised jointly with the National Defense University and the Atlantic Council.

Opening the meeting, NATO PA President Gerald E. Connolly highlighted the Biden administration’s renewed focus on NATO and the transatlantic alliance: “I am confident you will see from this administration a clear commitment to reinvigorate and strengthen the transatlantic bond, and a return to a relationship with our Allies which is based on respect and trust.” He recalled that one of President Biden’s first calls had been with NATO Secretary General Jens Stoltenberg. In that conversation, President Biden reaffirmed the United States’ unwavering commitment to NATO and to Article 5, and his intention to consult and work with Allies on the full range of shared security concerns.

In addition to addressing urgent issues related to China, Russia, Iran and Afghanistan, President Connolly urged NATO PA members to tackle the growing external and internal threats to democracy. Referring to the assault on the United States Capitol on 6 January, he warned that “democracy is fragile. We must constantly work to protect it, expand it, and strengthen our ability to resist and counter attempts from within and from without to undermine it.”

Reaffirming the Alliance’s internal commitment to shared democratic values is a key priority for President Connolly. He has therefore been advocating for the establishment of a Democratic Resilience Coordination Centre within NATO to assist member and partner nations to strengthen their democratic institutions.

“There is no question that the United States and our allies face urgent threats from Russia, China and Iran given their increased nuclear programs, said Mr Turner. “As Chairman of the NATO Parliamentary Assembly’s Defence and Security Committee and a member of the House Armed Services and House Intelligence Committees, I will continue to support NATO, which is integral to international security, as we work under the new Biden administration to reassure alliance member nations and prevent an escalating international arms race.”

“Like all of our nations, the U.S. is facing a really unprecedented set of challenges, but they also are once-in-a-lifetime opportunities to make life better for the people we serve,” stressed Congresswoman Sanchez. “What you will see in this new administration is a serious commitment to our alliances, to policy solutions backed by fact, as well as the courage to face up to facts and science.”

Members held a minute of silence at the beginning of their meeting in memory of Miroslav Tudjman, Head of the Croatian delegation to the NATO PA, who passed away on 31 January.

NATO PA members will reconvene for a second part of the Parliamentary Transatlantic Forum on 26 March to hear from representatives of the US administration and experts.