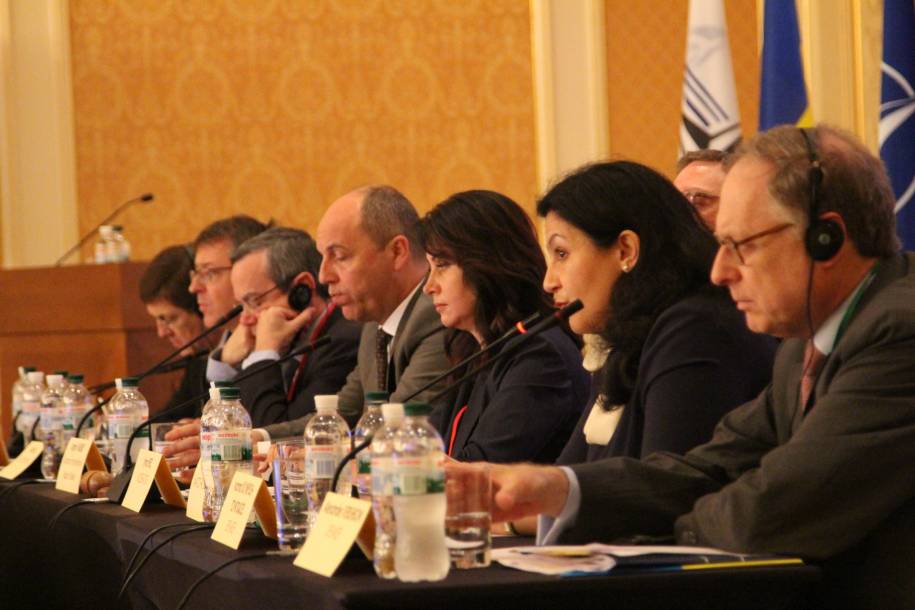 Kyiv, 6 July 2017 – “The Black Sea is a springboard for Russia’s efforts to extend its reach and influence far beyond its borders”, distinguished US diplomat and former NATO Deputy Secretary General Alexander Vershbow told legislators from NATO member and partner countries who gathered in Kyiv for a meeting of the NATO Parliamentary Assembly (NATO PA). Given the political, economic and human rights implications of Russia’s destabilizing policies, he stressed that all NATO Allies were stakeholders in the security of the Black Sea. In the face of Russia’s considerable military build-up, he suggested that NATO needed to consider a more persistent military presence in the region, especially when it came to maritime capabilities.

Ambassador Vershbow and Ivanna Klympush-Tsyntsadze, Vice Prime Minister of Ukraine for European and Euro-Atlantic Integration, also called on individual NATO member states to step up their support by providing Ukraine with a broader range of defensive weapons to better protect the forces along the line of contact. They also urged them to raise the costs to Russia of its daily aggression in Eastern Ukraine, which Russia continues to deny.

Andriy Parubiy, Chairman of the Verkhovna Rada, noted that the Ukrainian parliament passed legislation identifying NATO membership as a strategic goal for Ukraine. He stressed that public support had increased considerably in recent years. According to opinion polls, a clear majority of the voting public now supports Ukrainian membership of NATO. Paolo Alli, President of the NATO Parliamentary Assembly, reaffirmed that the Assembly was determined to provide its support to Ukraine’s Euro-Atlantic aspirations.

Legislators from NATO member and partner countries were also briefed on the situation in the occupied regions of Ukraine. Speakers stressed that the Kremlin continued to orchestrate the conflict in Eastern Ukraine, with casualties and ceasefire violations reported on a daily basis. Russia had not fulfilled its obligations as a Minsk-2 signatory, including ending the violence and the withdrawal of heavy weapons and of the thousands of Russian soldiers from Donbas. Some Western officials also urged Ukraine to step up the implementation of its commitments under the Minsk-2 agreement. However, Ukrainian interlocutors insisted that granting Donbas special status at this point would provide a base for President Putin to continue to destabilise Ukraine.

The delegates also heard that the situation of the local population in Crimea had deteriorated in the over three years since Russia’s illegal annexation of the peninsula. In particular, the indigenous Crimean Tatar and the Ukrainian minorities had experienced severe intimidation and persecution, with reports of numerous abductions. Freedom of speech had been curtailed and cultural organizations banned. Western politicians were warned not to fall into “the Kremlin’s trap” of considering the recognition of Crimea’s illegal annexation in return for Russia’s withdrawal from Donbas.

The delegates also discussed Ukraine’s reform agenda. Ivan Miklos, Chief Economic Adviser to the Prime Minister of Ukraine and former Minister of Finance of Slovakia, as well as Hugues Mingarelli, Head of the EU Delegation to Ukraine, noted that Ukraine had made more progress on reforms in the last three years than in all previous years of independence combined. While corruption remained a major problem, the scope for corruption had been reduced. They stressed, however, that the battle between reformers and those who tried to preserve their vested interests was far from being over. The delegates heard that NATO’s Building Integrity programme provided a very important tool to eradicate corruption in the defence and security sector.

The participants also discussed other regional issues, including the situation in Moldova. Ruslan Piontkivsky, World Bank Senior Country Economist for Moldova, said that Moldova had overcome the economic nadir of 2015 and managed to put the economy on the path of growth. However, Chatham House expert Cristina Gherasimov noted that political uncertainty in Moldova was acute, and that there was a possibility that the country could abandon its pro-Western strategic course.

The 95th Rose-Roth seminar of the NATO Parliamentary Assembly entitled “Towards a Secure and Stable Ukraine and Black Sea Region” took place in Kyiv on 3-6 July. The participants also commemorated the 20th anniversary of the NATO-Ukraine Charter. The seminar brought together over 170 participants, including 80 members of parliament from 29 NATO member states and partner countries.

The event was organised by the NATO Parliamentary Assembly (NATO PA) in cooperation with the Verkhovna Rada of Ukraine and with the support of the Swiss Government.

This was the sixth Rose-Roth Seminar in Ukraine since the beginning of the programme in 1991. The first one was held in 1993.