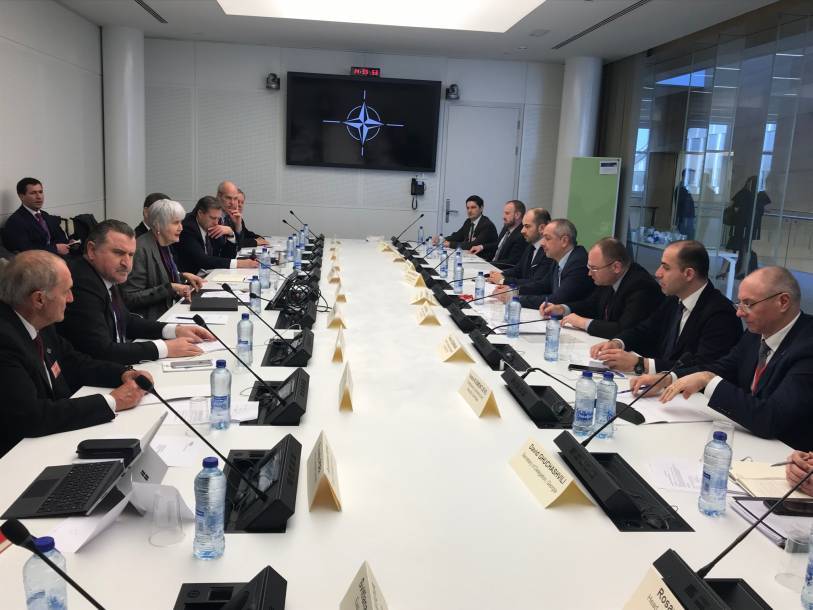 Brussels, 22 February 2019 - A high-level parliamentary delegation from Georgia visited NATO Headquarters on 20 February to review the progress of Georgia’s Euro-Atlantic integration. Public support for NATO membership remains extremely high in Georgia – some 78%, according to a recent poll. However, Georgian parliamentarians noted that the sense of disbelief in the attainability of this goal was growing in the Georgian society, partly as a result of Russian propaganda.

High-ranking NATO officials and members of the NATO Parliamentary Assembly (NATO PA) reassured Georgian lawmakers that Georgia remains high on the Alliance’s and the Assembly’s agenda. NATO PA President Madeleine Moon (United Kingdom) recalled the Assembly’s early support for Georgia following the 2008 war with Russia, leading to the creation of the Georgia-NATO Interparliamentary Council (GNIC) – a dedicated forum for dialogue and cooperation with the Georgian parliament.

In turn, NATO Deputy Secretary General Rose Gottemoeller highlighted the intensity of NATO-Georgia co-operation, both in terms of top-level meetings as well as in practical cooperation in the defence area. She particularly praised the progress made in developing the NATO-Georgia Joint Training and Evaluation Centre (JTEC). She also thanked Georgia for its invaluable contribution to NATO operations, particularly the Resolute Support Mission in Afghanistan, where Georgia is the largest non-member and fourth largest overall troop contributor.

The progress in defence and security sector reform received an overall positive assessment. The country’s military achieved a high degree of interoperability with NATO forces. Georgia also meets NATO’s defence spending target of 2% GDP, at least 20% of which dedicated to equipment. The implementation of the Substantial NATO-Georgia Package is proceeding efficiently. The Georgian parliamentarians stressed that – in cooperation with the NATO Liaison Office in Georgia – major strides have been made in improving parliamentary oversight of the defence and security sector.

Georgian interlocutors reiterated the position that Georgia does not expect NATO to solve its territorial problems and that “Georgia will not bring war to NATO”, as one Georgian delegate put it. They were keen to discuss ways in which Georgia’s membership in NATO could be envisaged with Article 5 of the Washington Treaty not applying to territories currently not controlled by Tbilisi.

Georgian delegates raised their concerns about Russia’s continuing destabilisation of their region and urged Allies to consider how Georgia could be more closely involved in technical discussions related to security in the Black Sea. They stressed that Russia is expanding its anti-access/area denial (A2/AD) bubble over the Black Sea. NATO representatives reassured them that the urgency of the Russian challenge in the Black Sea is well understood by all Allies, and had been made even more evident by Russia's illegal seizure of Ukrainian ships in the Kerch straight in November 2018. At the most recent meeting of the NATO-Russia Council, the Alliance demonstrated its unity by condemning Russia’s escalatory behaviour and persistent violations of international law. The Alliance has already increased its presence in the Black Sea as well as its support for NATO partners in the region.

Discussions continue in the framework of the Geneva process – co-chaired by the OSCE, the United Nations and the European Union, and with the participation of the United States – for a resolution of the conflict over Abkhazia and South Ossetia. Parallel talks are also ongoing between the Georgian Prime Minister’s Special Representative, Zurab Abashidze, and the Russian Deputy Foreign Minister, Grigory Karasin, on humanitarian, trade and economic issues. While the second have been successful in preserving active trade and movement of people between the two countries, the former are largely stalled.

Meanwhile, the human rights situation in Georgia’s provinces of Abkhazia and South Ossetia, de facto occupied by Russia, continues to deteriorate, Georgian delegates told their NATO interlocutors. South Ossetia, in particular, is almost completely shut off, depriving the population of the possibility of accessing the Georgian health care system and other services. In Abkhazia, too, the contacts with Tbilisi-controlled territory have been severely limited as Russia closed four out of five crossings of the administrative boundary line. Russia continues to alter the ethnic composition of these territories while closing Georgian-language schools. NATO officers as well as NATO Parliamentarians agreed that their respective governments and institutions must redouble their efforts to raise these acute problems in their contacts with Russian officials. Georgian representatives were also reassured that NATO countries will never accept the violation of Georgia’s territorial integrity.

During the meetings, there was a consensus that Georgia remains the leader of democratic transformation in the region and that its reform record is outstanding. However, some NATO officials and members of the Georgian delegation stressed the need to address concerns about the impartiality and professionalism of the judiciary. Similarly, Georgian members were urged to address the shortcomings identified by the OSCE/ODIHR report on the recent presidential elections. Lastly, discussions highlighted the importance, in Georgia’s newly adopted parliamentary system, to ensure the rights of the opposition.

On the economic front, Georgia trades actively with Russia, Turkey, China, Europe and the United States. China identified Georgia as a key partner in its Belt & Road Initiative. Georgian participants agreed that the ongoing construction of the Anaklia Deep-Sea Port by a mainly US-Georgian consortium is a project of considerable geopolitical importance that – once operational in 2021 – will strengthen Georgia’s sovereignty and bring tangible economic benefits.

The meetings took place in the format of the GNIC, created in 2009 as a parliamentary counterpart to the NATO-Georgia Commission. The multi-party Georgian delegation – five parliamentarians – was led by the head of the Georgian delegation to the NATO PA and chairman of the Defence and Security Committee of the Georgian Parliament Irakli Sesiashvili. The NATO PA was represented by its President Madeleine Moon (UK) and six senior members, including three US Congressmen.