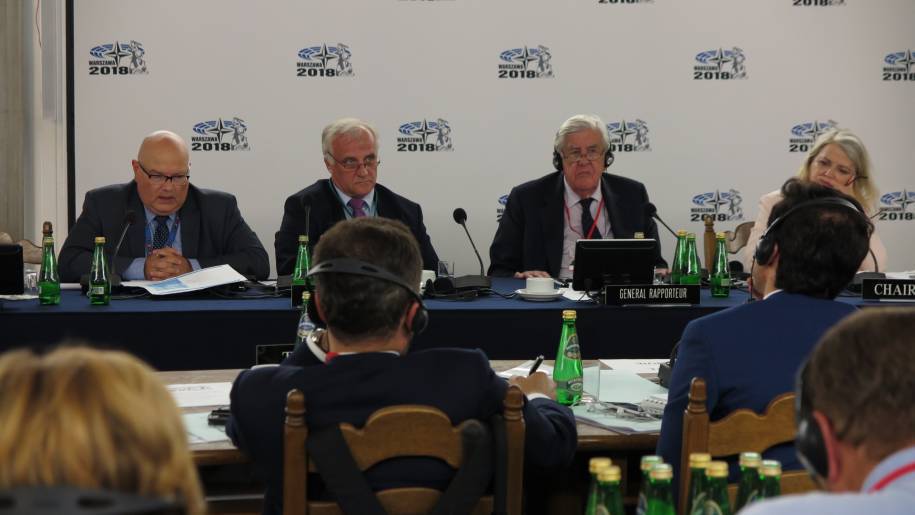 Warsaw, 26 May 2018 – Lawmakers from NATO nations on Saturday urged a tougher response to Russia’s hybrid warfare attacks on the West, including via a clampdown on money laundering and the international financial interests of the pro-Kremlin elite.

The appropriate NATO response to hostile Russia actions – from the illegal military intervention in Ukraine, to cyberattacks, meddling in Western politics and disinformation campaigns – was a major theme at the NATO PA’s Spring session held this year in Warsaw.

Speakers highlighted the importance of standing up to such aggression. “NATO must be determined,” Polish Foreign Minister Jacek Czaputowicz told the Assembly’s Political Committee. “The nature of today’s threats from Russia is such that inadequate actions can only expose Allies to threats.”

Czaputowiscz urged NATO leaders to build up Allied defence and deterrence capabilities when they meet in Brussels. He urged a strengthening of forces on NATO’s eastern flank.

Western governments were also urged to implement restrictions on the overseas assets of ultra-wealthy individuals close to the Russian leadership. “The pro-Kremlin plutocrats and corrupt officials can freely keep their dirty money and buy luxury property in the West,” Jopling said. “These privileges need to be re-examined and we need better scrutiny of the Russian money that is coming to our countries.”

Dr. Anders Aslund, an expert with the Atlantic Council think tank, said estimates suggested around US$800 billion in private Russian money had been invested overseas, much of it in the United Kingdom  and the United States, after passing through places such as Cyprus, the British Virgin Islands or the Cayman Islands.

He said measures targeting the financial interests of individuals close to the regime – such as the so-called Magnitsky Acts adopted by the United States or the Unexplained Wealth Orders used by British authorities to track suspicious funds – were the most effective sanctions against the Russian ruling elite.

NATO remains open to dialogue with Russia, said Robert Pszczel, senior officer at the Alliance’s Public Diplomacy Division, but he saw little sign that Moscow is willing to change its hostile stance. “The challenge will not go away while the current Russian elite stays in power,” said Marek Menkiszak, head of the Russian Department at the Center for Eastern Studies. “What we should expect is that Russia will be more authoritarian, economically weaker, militarily stronger and equally - or more -aggressive.”