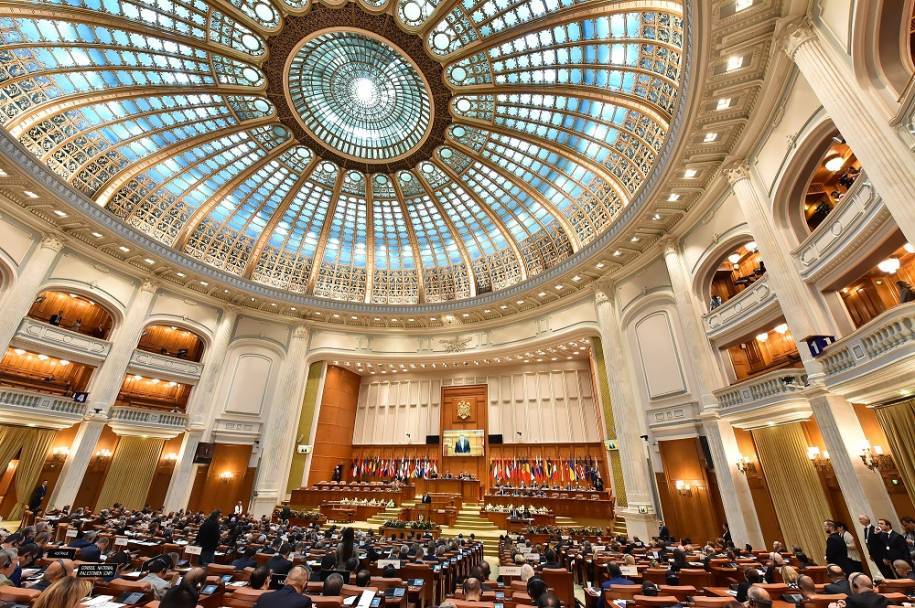 Bucharest, 9 October 2017 – NATO’s Parliamentary Assembly wrapped up its annual session Monday with a reaffirmation of Alliance unity in the face of a myriad of security challenges from terrorism and instability in Europe’s southern neighbourhood to Russia’s hostile stance in the east.
“Moscow seeks to consolidate its presence and influence from the High North to the Middle East and from Eastern Europe and the Western Balkans to Asia,” cautioned Paolo Alli, the NATO PA president. “It is also seeking to penetrate the political and media sphere in our own countries.”
Alli spoke at the closing session of the four-day gathering of lawmakers from the 29 NATO Allies and 21 partner nations held this year in Bucharest. He was joined by NATO Secretary General Jens Stoltenberg and Romania’s President Klaus Iohannis.
Stoltenberg highlighted the Assembly’s key role in engaging with national parliaments and the public, and in ensuring that defence budgets are approved to “ensure that NATO has the tools to do its job.”
President Iohannis pointed out that Romania this year will become one of six Allies meeting NATO’s target of spending at least 2 percent of gross domestic product on defence, and was committed to maintaining that level for the next decade. “Today more than ever, we need the Alliance to be strengthened,” he told the Assembly.
Moscow’s interference in countries around the Black Sea was an issue of particular concern throughout the NATO PA meeting which issued strong declarations of support for nations facing Russian intervention. “Supporting Ukraine, the Republic of Moldova and Georgia, is defending the whole of Europe and NATO as well,” Alli said.
Stoltenberg insisted NATO does not want to isolate Russia and remains open to dialogue, but he said a strong deterrence position was the best way to maintain security.  “NATO doesn’t want a new Cold War, our actions are designed to prevent, not provoke conflict” he told the Assembly.
The Bucharest meeting approved a series of policy recommendations for NATO governments on issues ranging from the weaponisation of social media, Alliance support for Afghanistan, closer cooperation with the European Union and a fairer share out of defence costs among the 29 Allies.
Risks on the Alliance’s southern flank were a particular concern. “We continue to face a constellation of challenges on our southern borders,” Alli said. “Instability in our neighbourhood, from Libya to Iraq and Syria, breeds a persistent terrorist threat that has affected too many of our cities already.”
Lawmakers also reaffirmed support for NATO’s “open door” policy for nations in the Western Balkans who seek Alliance membership; examined the security implications of climate change, particularly in the Arctic region; and discussed the need for enhanced missile defences against the backdrop of North Korea’s nuclear tests and uncertainty over Iran’s ballistic missile programme.