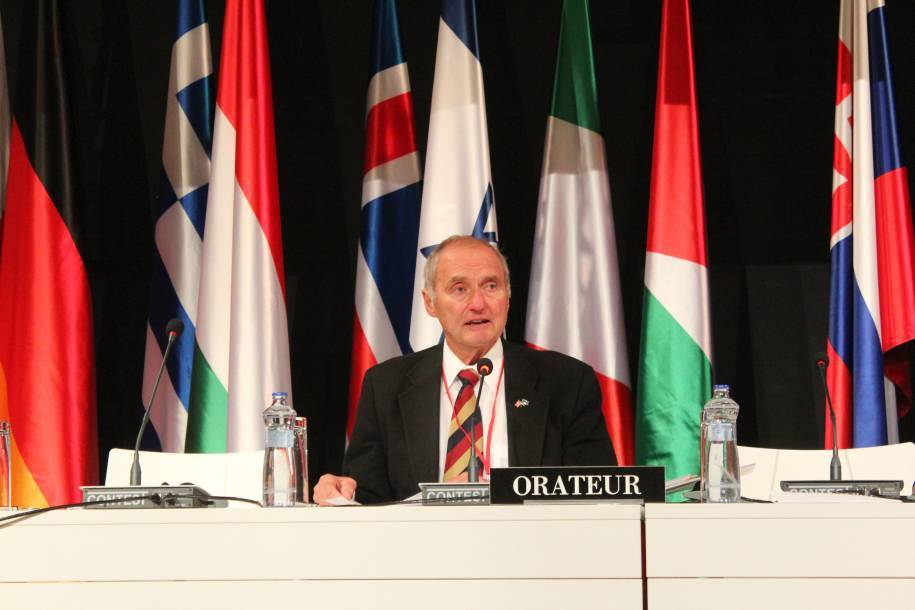 Bratislava, 1 June 2019 – The NATO Parliamentary Assembly debated the future of nuclear deterrence Saturday against the backdrop of the potential demise of the Intermediate-Range Nuclear Forces (INF) Treaty. Following years of persistent Russian non-compliance, Washington announced its intention to withdraw from the treaty last October. There is unanimous and strong Allied support of the United States’ decision.

“The INF Treaty falling into desuetude risks upsetting the global arms control architecture that has existed since the end of the Cold War,” said a draft report presented by Canadian Senator Joseph A. Day at the NATO PA’s annual Spring Session.

“This deteriorating context, by endangering the stability of the management and manufacture of nuclear weapons, is paving the way for a potential new era of rearmament,” the draft added.

The 1987 INF Treaty between the United States and the Soviet Union eliminated all ground-launched nuclear and conventional missiles with ranges of 500-5,500 kilometres. Russia’s development and deployment of the 9M729 intermediate-range dual capable missile system violates both the spirit and the letter of the treaty. Despite diplomatic efforts, economic sanctions and military messaging, the Kremlin has refused to return to compliance with the treaty.

As a result of Russia’s non-compliance, the United States announced the suspension of its obligations under the INF Treaty on 1st February. The US move to suspend its treaty obligations means it can terminate the INF Treaty in six months, if Russia does not return to compliance. In a tit-for-tat move, the Kremlin took the same steps the following day.

Day joined NATO in urging Russia to return to compliance, noting that, if it does not do so, Russia will bear full responsibility for the demise of the treaty. However, if the INF ends, the Alliance needs to renew debate about the correct mix of forces and negotiated arms control, he concluded.

She suggested arms control options that could be pursued in response to the eventual termination of the treaty, including efforts to negotiate an “INF 2.0” that could encompass a wider range of weapons and more players, such as China. Kubiak said she is among those who believe that a global INF Treaty could be viable, although she warned it would be a “long, long process.”

Day’s draft report cautioned that the role of China and other nuclear powers risked complicating rivalries accentuated by the termination of the INF. “More actors with complex linkages abetted by new technologies are making a new nuclear arms race both more likely and dangerous,” it said. The report is due to be updated before adoption at the Assembly’s October meeting in London.

“They are vital to reduce the risks of military escalation and preventing conflict,” he said. “Unfortunately, in the current polarized political environment, it is very, very tough to strengthen these measures.”

They could involve a whole-of-society approach to show potential adversaries that their efforts will not undermine resilient Allied countries. “There is huge potential for us all to come together and create a combined shield, to signal to our adversaries that: yes, we are free and open societies, but you won’t be able to disrupt our daily lives.”