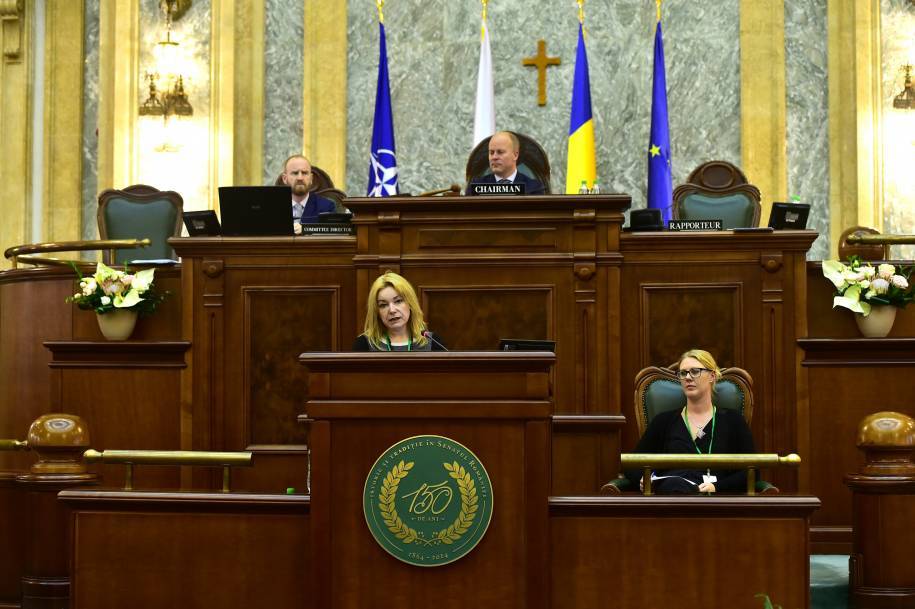 Bucharest, 8 October 2017 – Gender must be considered when designing and implementing counter violent extremism programmes, lawmakers from across the NATO Alliance heard on Sunday. Engagement with both women and men in community outreach programmes will go further in building trust and breaking down stereotypes.
“It’s important to think about gender because women are involved as well as men,” Elizabeth Pearson, an expert with Britain’s Royal United Services Institute (RUSI), told the NATO Parliamentary Assembly. “We need to be avoiding stereotypes, learning to listen to communities and fostering trust.”
Pearson joined fellow RUSI expert Emily Winterbotham to brief the NATO PA’s annual session on their research into “women, gender and violent extremism.”
Winterbotham said the role of woman is often misunderstood in government counter violent extremism (CVE) initiatives.
“Women do play extremely important roles in peacebuilding and also in countering violent extremism”, she told the Assembly’s Defence and Security Committee. “What we are suggesting is letting them define what role, rather than in some of the more recent CVE policies we’ve seen highlighting these roles as mothers or women always being peaceful.”
Pearson and Winterbotham published a report in August based on two years of research into the role of gender in Daesh’s recruitment. Over the course of their work, they spoke to around 250 people in Britain, Germany, France, the Netherlands and Canada. They found differences in the Daesh recruitment mechanisms for men and women, and challenged the common perception of women being innately peaceful or innocent victims being coerced or manipulated into joining Daesh. They told the lawmakers a lure of female “empowerment” plays a factor in the terrorist group’s appeal to young women.
She explained that Daesh reaches out to young Muslim women struggling with identity issues in the West, by offering “a new vision of society” with an important role for women, for example, as wives and mothers.
The pair said women are believed to make up around one-fifth of the 5,000 foreign terrorist fighters estimated to have joined Daesh from Europe. “Our research revealed that radicalisation to Daesh is actually a source of empowerment,” Winterbotham said. “This links to the search for identity; a key component of the radicalisation process, both for men and women.” Their report found that women were more susceptible to online recruiting than men, including grooming by men offering marriage.
Young women who feel discriminated against in Western societies – for example because of their dress – can feel their status is enhanced by aligning with Daesh, the RUSI researchers found. “Different vulnerabilities need to be taken into account with regards to locations and processes, and this should be a key consideration in countering violent extremism programming,” Winterbotham concluded.