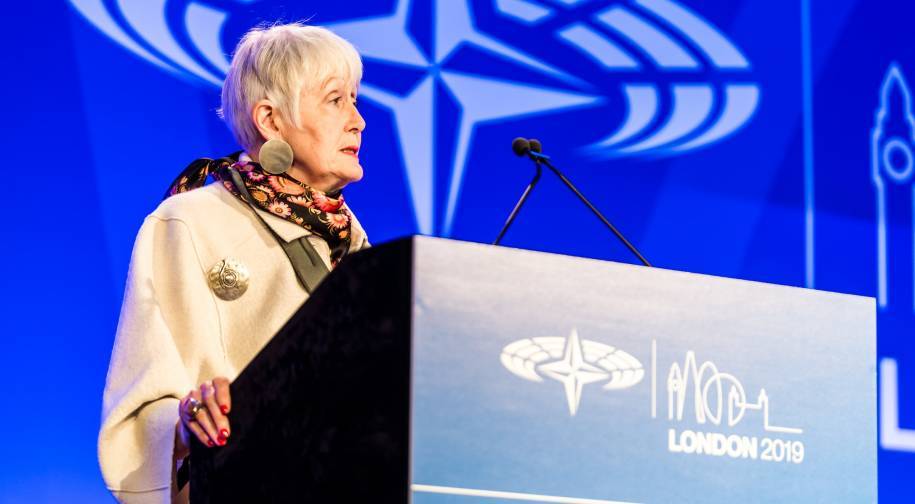 London, 14 October 2019 – The President of the NATO Parliamentary Assembly on Monday urged consultations among Allies under Article 4 of NATO’s founding treaty to discuss the situation in northern Syria following Turkey’s military intervention.

“This matter should, in my view have been the subject of full Article 4 consultations, since it is clear that many here feel their territorial integrity, political independence and security threatened,” Madeleine Moon told the Assembly’s plenary session in London. “Let us hope that this consultation begins now.”
Article 4 of the North Atlantic Treaty says the Allies “will consult together, whenever, in the opinion of any of them, the territorial integrity, political independence or security of any of the Parties is threatened.”

Several members of the NATO PA expressed concern about the situation in northern Syria, pointing to humanitarian fears, the risk of further instability spreading beyond Syria, and the danger of a renewed threat from Daesh particularly if its fighters are able to escape from detention in the region.

“This situation is unacceptable,” said Christian Cambon, head of the French Delegation to the NATO PA. “We see a very unstable situation.” The head of the Belgian Delegation Theo Francken called for an urgent gathering of NATO’s governing body, the North Atlantic Council.

Addressing the final day of the NATO PA’s annual session, NATO Secretary General Jens Stoltenberg acknowledged Turkey has “legitimate security concerns” but he expected it “to act with restraint and in coordination with other Allies so that we can preserve the gains we have made against our common enemy – Daesh.”

Moon also recognised that Turkey “has long expressed concerns about a terrorist threat” from groups in the region. She urged dialogue as “the only way that this matter will be resolved.”

Osman Bak, head of Turkey’s Delegation, insisted his country would continue the fight against Daesh but would also tackle other terrorist threats emanating from Syria. “Turkey is always ready to listen to the views of our Allies and to explain its legitimate security … concerns,” Bak told the meeting.

The plenary meeting wrapped up four days of talks in the NATO PA’s annual session, held this year in London.

The NATO PA brings together members of national parliaments from the 29 Allies as well as partner countries, observers, and international organisations. It is an essential forum for exchanging views on security issues between the Alliance and member parliaments, making it an important link to citizens in the Euro-Atlantic area.