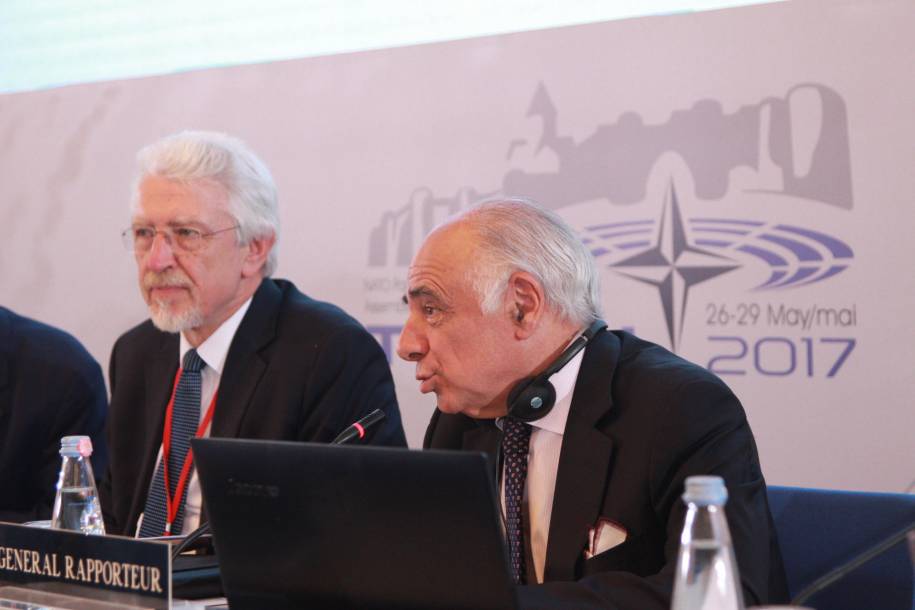 Tbilisi, 28 May 2017 - NATO needs to step up its response to regional challenges on its northern and southern flanks, from the spill-over from conflict in the Middle East to rising competition for resources in the High North, lawmakers from Alliance nations warned Sunday.

“Political, social and economic instability in the MENA (Middle East and North Africa) region has a significant impact on the security of the NATO Alliance,” cautioned Julio Miranda Calha, a Portuguese lawmaker who reported on challenges in the south for NATO’s Parliamentary Assembly.

“Religious extremism and radicalisation, migration and terrorist groups’ activities are some of the greatest security challenges that directly affect NATO from the South,” he added.

Miranda Calha’s draft report, presented at the NATO PA’s Spring Session, recommended continued action by Alliance nations against Daesh; increased sharing of intelligence on terrorist threats among Allies and with partners; and increased support to help countries in the region improve living conditions for their people and promote reconciliation.

On the northern flank, US Congressman Gerald Connolly reported on Russia’s military buildup in the Arctic and increased Chinese engagement in the High North, as climate change raises the risk of heightened international rivalry there.

“There is currently no rush on Arctic resources (but) the situation could change very quickly,” Connolly said. “As Arctic ice continues to melt and other non-NATO states re-evaluate their Arctic posture, it would be prudent for NATO to engage in an effort, coordinated among member states, to improve its situational awareness in the High North.”

He suggested the creation of an “Arctic task force” at NATO Headquarters to identify the security implications of climate change in the Arctic, review Allied infrastructure needs in the region and analyse Russia’s evolving military footprint posture and China’s strategy in the region.

Russia’s role was a common feature in the NATO PA reports on the northern and southern flanks.

French Senator Joëlle Garriaud-Maylam reported to the NATO PA on the humanitarian disaster in Syria. Describing the six-year conflict as the “worst man-made disaster this century,” her draft report urged a stronger Western response to the conflict that has claimed the lives of 400,000 people and forced almost 11 million to flee their homes.

“Europe and North America need to develop a far greater capacity to manage this crisis both within and beyond their borders, alongside their international partners,” Garriaud-Maylam said. “Doing so makes not only humanitarian, but also security sense.”

She listed several recommendations in her draft report, including increased efforts to convince Russia to direct its efforts to fighting terrorism rather than supporting the Assad regime; additional efforts to ensure a more equal distribution of humanitarian aid; increased assistance to Jordan and Lebanon to help them cope with the refugee influx; and better integration of refugees legally admitted into Western countries