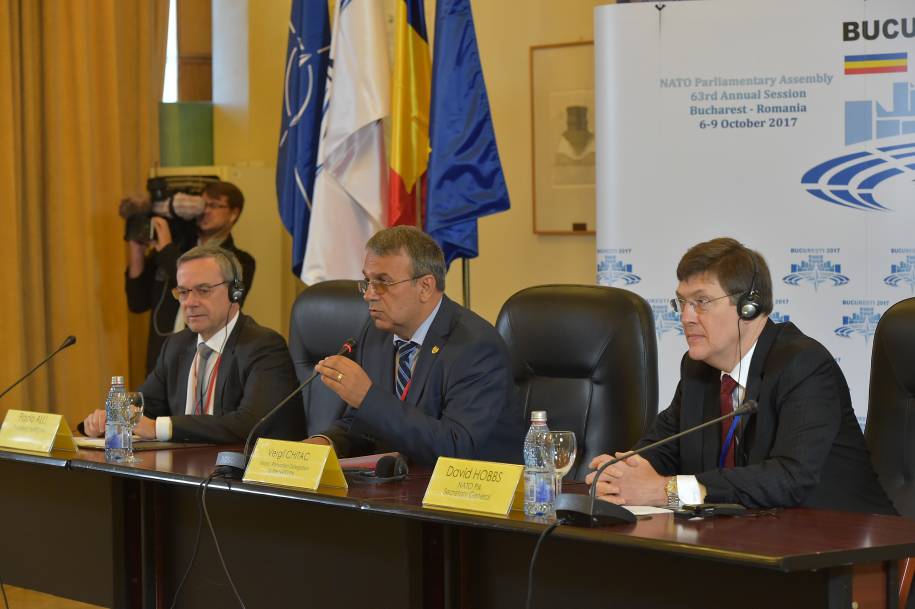 Bucharest, 6 October 2017 – The President of NATO’s Parliamentary Assembly Paolo Alli on Friday stressed the Alliance’s commitment to the defence of its eastern members at a time of increased tension with Russia.
“Defending our eastern borders is not only defending Romania or defending the Baltic States, but it’s defending the entire Alliance,” Alli told a news conference ahead of the NATO PA’s annual session held this year in Bucharest.
“On the eastern flank of the Alliance we have increasing tensions with Russia, Black Sea security is crucial … for Europe and for the Euro-Atlantic Alliance,” Alli added. “The aggressive behaviour of Russia is unfortunately not diminishing.”
Relations with Russia and Black Sea security are among the key themes of the four-day Assembly session that will gather around 300 lawmakers from the 29 NATO countries plus 23 partner and associate nations in the Romanian capital.
Other session topics highlighted by Alli included stability in the Western Balkans, cooperation between NATO and the European Union, security challenges on NATO’s southern flank and increased Alliance efforts in support of Afghanistan.
“The problems of Afghanistan cannot be underestimated,” Alli told reporters. “The threat from terrorism from this area is still very high, and the flow of refugees coming from Afghanistan is a consequence of this situation.”
Joining President Alli at the news conference, the head of Romania’s Delegation to the NATO PA, Vergil Chițac said the complicated international situation – including tensions in Korea, the Middle East and on NATO’s eastern borders – made the Assembly’s meeting that started Friday one of the most important since the end of the Cold War.
“It is taking place at a time when the NATO Alliance is being profoundly challenged and there are attempts to destabilise the European Union,” said Chițac. He underscored Romania’s support to the Alliance both politically and militarily, notably through its contributions to missions in Afghanistan, the Balkans and in the Mediterranean.
During Monday’s plenary session of the Bucharest meeting, the Assembly is scheduled to pass a series of resolutions with recommendations for NATO governments on issues including support for the Afghan Armed Forces; Black Sea security; improving burden sharing among the Allies; and confronting the weaponisation of information.