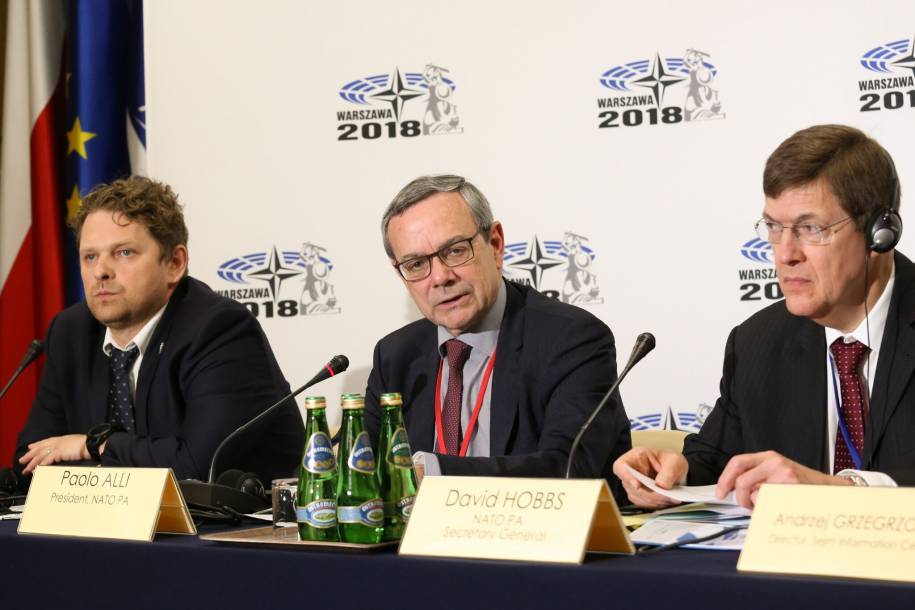 Warsaw, 25 May 2018 – The President of NATO’s Parliamentary Assembly on Friday underscored the importance of Alliance unity in a troubled international security environment and called for strengthened defences on the eastern flank in response to persistent challenges from Russia.

“We must continue to strengthen the deterrence on the eastern flank because we don’t see, up to now, any change in the behaviour of the Russian Federation,” NATO PA President Paolo Alli told reporters. “We have to be […] more and more concrete in supporting our friends living in the eastern flank.”

Alli spoke at the opening of the Assembly’s annual Spring Session, held this year in Warsaw. The four-day meeting which drew over 260 lawmakers from 50 Allied and partner countries is scheduled to adopt a declaration on boosting Alliance unity with recommendations for NATO leaders ahead of their summit in Brussels in July.

Unity is crucial at a tense time in international relations, Mr Alli said. He referred to challenges in Korea and the Middle East as well as threats closer to home. “Security is more and more connected and global, and NATO represents the strongest, the most important and successful political and military alliance,” he said.

Reinforcing NATO’s deterrence forces and the need to tackle threats from Russian election meddling and misinformation campaigns will be key themes of the Warsaw meeting, which will underscore the importance of supporting the Alliance’s eastern members.

NATO deployed an Enhanced Forward Presence comprising four battlegroups in Poland and the Baltic States following Russia’s illegal occupation of Ukraine’s Crimea region in 2014. “The eastern flank, and the presence of the forces of the Alliance there is the most important issue for us,” said Marek Opiola, head of Poland’s Delegation to the NATO PA. “We need a common understanding of all our Allies about the importance of this part of the world.”

Lawmakers will also focus on defence budgets and the commitment NATO allies made in 2014 to work towards spending at least 2 percent of gross domestic product on defence by 2024.

“We have stopped the decrease in investments which was general in Europe and now there is a new increase in spending … every country has to work on that,” Alli said. “We not only have to spend more, we have to spend better.”

Other issues on the agenda in Warsaw include energy security, challenges on NATO’s southern flank, international trade relations and defence innovation.