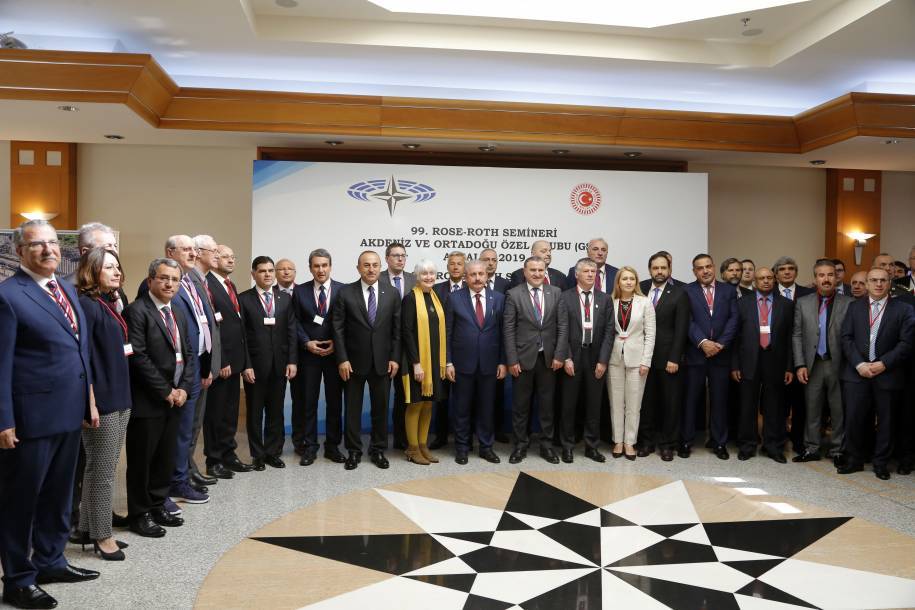 Brussels / Antalya, 17 April 2019 – NATO’s near neighbourhood in the Middle East and Africa is undergoing significant political, military, social, and economic upheaval. Many are already calling the new wave of social protests and power shifts in Algeria and Sudan a second Arab Spring. Meanwhile, Libya seems to be descending into deeper chaos, while the international community remains divided on the future of Syria.

To discuss these and other key issues affecting the region, NATO legislators joined their peers from the Middle East and North Africa as well as other Alliance partner states in Antalya, Turkey, for a Joint meeting of the Rose-Roth Seminar series and the Mediterranean and Middle East Special Group (GSM).

As NATO Parliamentary Assembly President, Madeleine Moon (United Kingdom), stated in her opening remarks: “Our governments and parliaments have long recognised that the Euro Atlantic community’s security, prosperity, and stability are directly linked to developments in the broader MENA region. This recognition of our shared destiny has been a principal driver of the important relationship we have forged with the parliaments in this very diverse region.” GSM Chairman Philippe Folliot (France) echoed Ms Moon’s comments, noting that “the MENA region currently faces a host of truly formidable challenges, the impact of which reaches far beyond the borders of the Mediterranean”.

Turkey is on the front lines of some of the region’s most challenging issues: terrorism, large-scale migration, the devastating impact of the Syrian civil war, shifting power structures, the influence of powers from outside the region, and new economic initiatives. Turkey is therefore centrally involved in the many regional issues and initiatives, a fact which was evident throughout the seminar.

Many participants paid tribute to Turkey’s hosting of over 3.6 million Syrian refugees since the beginning of the Syrian war.  Recognising the humanity and generosity of Turkey’s role in the Syrian refugee crisis, President Moon noted: “It is sobering to consider how much more severe the international refugee crisis in Europe would be without the remarkable generosity and hospitality Turkey has shown to the Syrian people.”

Turkish Minister of Foreign Affairs, Mevlut Cavusoglu, and Mustafa Sentop, President of the Grand National Assembly of Turkey, started the seminar’s discussions with emphasising the importance of the NATO’s continued efforts to adapt its defence and deterrence posture to meet the demands of an increasingly complex international security environment.

NATO PA and Turkish representatives addressed their differences over the nature of the “People’s Protection Units” or YPG in Syria, and Turkey’s intended purchase of the S400 air defence system from Russia.  Recognizing the need for further discussions on these matters, it was stressed that Turkey was firmly committed to Alliance solidarity.

The wide-ranging agenda included sessions on the security situations in Iraq, Libya, and Algeria; the Sahel, Central Asia, the Gulf; and recent developments in the Israel-Palestine conflict.  Turkish Rapporteur Ahmet Berat Conkar also presented the first draft of his report for the GSM on Syria, which provides an update on the military and diplomatic situation, as well as the role and influence of regional actors.

Other overarching themes during the seminar included the challenges of political and institutional reform in the MENA region, and Russia and China’s roles and ambitions in the Middle East.

Participants consistently stressed their common resolve to remain focused on not only understanding the causes of instability and social upheaval, but also to work together to find the ways to assist the region’s people to find a way toward lasting peace and prosperity.

As NATO officials addressing the meeting stressed, NATO itself as well as NATO member countries see capacity building and engagement as key tools in helping nations in the region address the security, economic, and political challenges they are facing. Providing an early assessment of the achievements of NATO’s advice and assistance mission in Iraq, Major General Dany Fortin, the mission’s commander, highlighted the positive reception of NATO’s efforts by Iraq’s defence establishment and security forces.

The seminar was hosted by the Turkish delegation to the NATO Parliamentary Assembly, headed by Mr. Osman Askin Bak - also a Vice-President of the Assembly. On the margins of the seminar, Mr. Bak – a former Minister for Youth and Sport - organised a friendly football match between parliamentarians and young Syrian refugees.  As Mr. Bak noted: “The power of sport is incredible – for these young boys soccer is a means to overcome many of the hardships and traumas they have experienced as a result of the war. I am glad my colleagues in the NATO Parliamentary Assembly and other partner nations were able to witness the healing effect that sport can have.”

Over 120 parliamentarians from NATO member states and partner countries participated in the joint Rose-Roth – GSM meeting in Antalya, Turkey from 12-14 April – the meeting marked the 99th meeting in the Rose-Roth format. A more detailed report of the summary will be posted on the NATO Parliamentary Assembly website in the coming weeks.

Photos of the seminar are available for public use on Flickr.