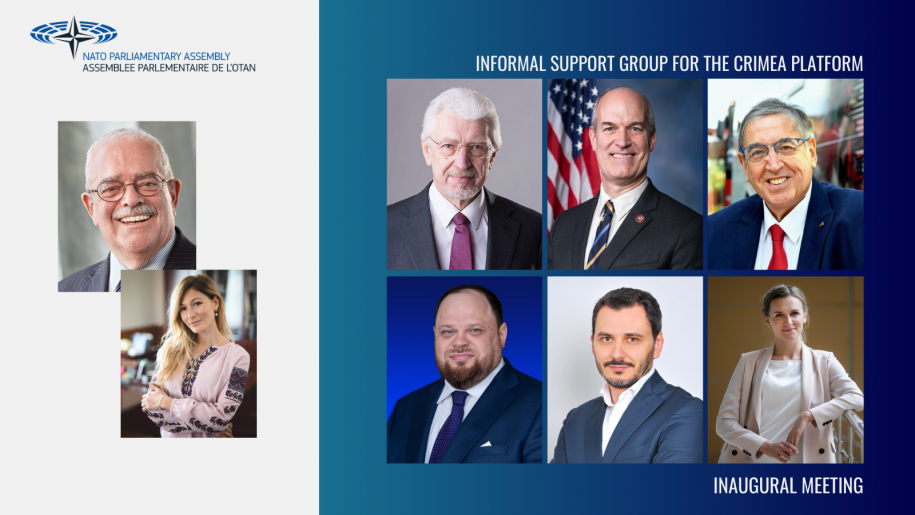 The NATO PA’s informal support group for the Crimea Platform was established today. Three leading members of the NATO PA – Ojars Eriks Kalnins of Latvia, Prof. h.c. Dr Karl A. Lamers of Germany and Rick Larsen of the United States – and three of their counterparts from the Verkhovna Rada of Ukraine – First Deputy Chairman Ruslan Stefanchuk, Head of the NATO PA delegation Yehor Cherniev and Deputy Head Solomiia Bobrovska – will take the lead in supporting efforts to remobilise international attention on Russia’s illegal occupation of Crimea and its multi-faceted impact. The meeting took place on the heels of Russia’s recent massive military build-up in and around Ukraine, including in Crimea, and as Moscow claimed it started withdrawing these troops to their bases.

Ukraine established the Crimea Platform at the end of 2020 in order to increase the effectiveness of the international response to Russia’s ongoing occupation and ultimately achieve Crimea’s full peaceful return under Ukraine’s effective control. The Platform functions at four levels: Heads of State and Government, Ministers, Parliaments and experts. The Assembly’s informal support group would contribute to the parliamentary dimension of the Platform.

Addressing the meeting, NATO PA President Gerald E. Connolly (United States) emphasised: “We must repeat time and again, for however long it takes, that we will never recognize Russia’s forcible and illegal annexation of Crimea.” Crimea, he added, “is the ultimate test of our collective resolve and commitment to defend the rules-based international order.” Commenting on Russia’s announcement of the end of its troop movements, Mr Connolly noted “we should not let ourselves be fooled by what some will present as ‘de-escalation’. The reality is that Russia has been building up its military presence in Crimea since 2014. And that it continues to escalate through other means.”

Ruslan Stefanchuk thanked the NATO PA for its support. Stressing the extensive and multifaceted threat posed by Russia’s militarisation of the Crimean peninsula, he stressed that “concerted actions of the international community based on a long-term vision are urgently needed to reverse the negative consequences of the occupation and attempted annexation of Crimea by the Russian Federation and to ensure restoration of Ukraine’s territorial integrity within its internationally recognised borders.” In this regard, the Crimea Platform was “aimed at elaborating practical approaches to achieve the de-occupation of Crimea and its return to Ukraine.”

In her briefing about the current situation in Crimea, Emine Dzhaparova, First Deputy Minister of Foreign Affairs of Ukraine, underscored the importance of the newly-established support group: “The Crimea Platform parliamentary track will play a crucial role in advocating its goals and objectives. We are confident that the support group at NATO PA will ensure that Russia’s illegal attempt to annex Crimea and its appalling record of human rights violations in the temporary occupied territories will remain in the focus of the NATO PA.”

Ukraine is due to host the inaugural Summit of the Crimea Platform at the end of August. Lines of effort include promoting non-recognition policies, enhancing international pressure on Russia, addressing security challenges connected with militarisation of the peninsula, preventing further human rights violations and mitigating the adverse economic and environmental impact of the occupation of Crimea on the region.