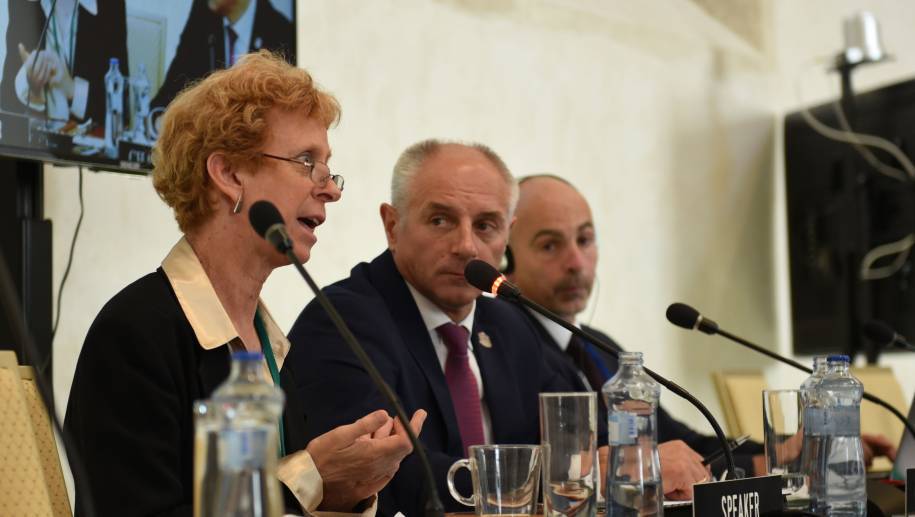 Bratislava, 1 June 2019 – NATO nations must prepare for new challenges posed by the fast pace of change in communications technology, artificial intelligence, and cyber threats, not just in terms of security but also due to the profound impact that hi-tech will have on their societies, parliamentarians were told Saturday.

In debates on a series of draft reports and expert commentary, members of the NATO Parliamentary Assembly considered security threats from outside the Alliance, posed by countries like Russia and China, but also divisions among members of the military Alliance over how to regulate the digital world and AI.

The case of Chinese tech giant Huawei and concerns about the possible security implications using its 5G technologies might have for NATO was a recurring theme of debate during the Assembly’s Spring Session, held in the Slovak capital Bratislava.

“It’s a mistake to compare Huawei with any other company. Behind it is a very powerful actor: the Chinese Communist Party,” Helena Legarda from the Berlin-based Mercator Institute for China Studies told members of the Assembly’s Science and Technology Committee.

Legarda said the party sees itself as “above the law” and that if it ever insisted that Huawei should act in the name of national security, the company would be obliged to do so.

Frances Burwell, from the Atlantic Council, told the Economics and Security Committee that as debate swirls over what role Huawei should play in the roll-out of next generation communications, “there is a real role for NATO as military infrastructure will be dependent on 5G.”

Burwell underlined that “there is no US company that is able to step into 5G like Huawei,” with only Ericsson, Nokia, and Samsung likely to come close to matching the Chinese firm’s reach in this particular  sector.

Turning to other potential foreign security threats, legislators discussed state supported cyber-attacks and when a military response would be warranted under NATO’s collective defensive clause, Article 5, which deems an attack on one Ally to be an attack on them all.

The debate and its follow up will be used to feed into a report by US Congresswoman Susan Davis containing policy recommendations for the 29-nation military Alliance when the NATO PA holds its next Annual Session in London in mid-October.

Lawmakers also weighed the implications of AI, with Slovenian rapporteur Matej Tonin saying that military robots “will have profound effects. It could force us to restructure our armed forces and change our operational concepts. And it could even affect the overall military balance.”

He warned that China is aiming to become the global AI leader and is developing a variety of AI-enabled military systems. The Slovenian lawmaker urged NATO defence innovators to invest in defence-related AI technologies and applications.

Paula Puskarova, from the Economics University of Bratislava, spoke of the challenges posed by robots in the civilian workplace. She said most concern focuses on whether jobs will be lost through automation, but warned that the biggest challenge will be dealing with mounting wage inequality.

Ms Puskarova highlighted the conundrum in host-nation Slovakia, which produces the most cars per capita in the world. She said many young Slovaks have university degrees and are forced to compete for low skill work, routinely in the automobile sector, for jobs likely to disappear due to robots.

Lawmakers also discussed a draft report by French deputy Jean-Marie Bockel focused on digital economy trends and security challenges. It considers how Allies are responding and the problems posed by China and Russia, as well as Europe-US tensions over data privacy and market regulation.