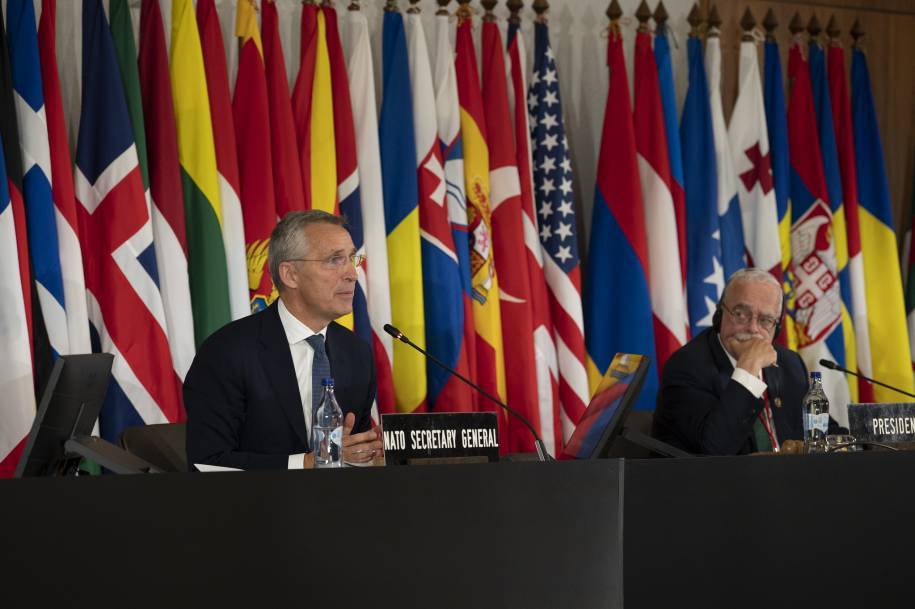 LISBON – The NATO Parliamentary Assembly concluded three days of talks Monday focused on the Alliance’s revised Strategic Concept to be adopted at a summit next year to ensure the Allies are primed to face the full array of contemporary challenges.

“As consultations on the revised Strategic Concept begin, our Assembly will play its full part,” said NATO PA President Gerald E. Connolly. “With our discussions here in Lisbon, we have laid the foundation of the Assembly’s contribution to this critical process.”

The need for an update is clear, Connolly said, pointing out that the current concept – developed 10 years ago – still refers to Russia as a partner, does not mention China at all and barely refers to climate change.

“This must change,” he said. “We must recognize that China and Russia do not share the same values as NATO Allies and seek to undermine the international rules-based order.”

In addition to adapting the Alliance to current external threats, the new Strategic Concept must underscore NATO’s commitment to democratic values and build internal resilience for the future, Connolly insisted.

NATO’s Secretary General Jens Stoltenberg said he was looking forward to a “robust engagement” with the Assembly on the Strategic Concept in the coming months.

“The world has completely changed … we see the global balance of power really shifting,” he said. “All these changes, the fact that we are faced with more state-to-state rivalry, that we have more global competition, makes NATO more important”, adding “the need for transatlantic unity is bigger now than it has been at any time since the end of the Cold War”.

NATO’s next Strategic Concept “will give us an opportunity to chart the way ahead for the Alliance, and reaffirm the centrality of the transatlantic bond to our security and our defence”, the NATO Secretary General stressed. “It provides us also with the opportunity to recommit to our core values, democracy, the rule of law and individual liberty.”

U.S. Assistant Secretary of State for European and Eurasian Affairs Karen Donfried endorsed the need for a new Concept adapted to the fast-changing security landscape.

“This framework will guide the Alliance’s approach to tomorrow’s evolving security environment, in terms of core tasks, challenges and threats. It needs to offer a clear, concise, and most importantly, honest assessment about the world in which we live,” she told the Assembly via video-link.

Among the pressing issues NATO must address are cyber-threats, instability on the Alliance’s southern flank, challenges to maritime security and tensions in the Indo-Pacific region, said Portuguese Prime Minister António Costa.

“NATO is constantly evolving and adapting, this is one of the secrets of our success as a political and military alliance,” Costa stated. “The Alliance can only adapt to the changing international landscape if we maintain solidarity … no Ally is strong enough to take on all the global challenges alone, none is too small to make a valid contribution to shared security.”

“In looking at today’s evolving security environment, we will need to better understand the drivers of conflict and adapt swiftly,” said Jean-Pierre Lacroix, United Nations Under-Secretary-General for Peace Operations, who also addressed Allied parliamentarians in Lisbon. “I know that NATO is reflecting on such matters in the context of NATO 2030. Within the UN peacekeeping family, we are also reflecting internally on what the future may hold.”

The Assembly adopted seven resolutions (policy recommendations) for NATO governments on several areas related the Strategic Concept review and the wider NATO2030 modernisation drive, as well as other issues including lessons from this summer’s withdrawal from Afghanistan, defence budgets, arms control and the challenge from Russia.

Those issues also formed part of a lengthy debate between lawmakers and Stoltenberg, where he was asked, in particular, about implications of the Taliban takeover in Afghanistan and the prospects for a stronger European defence role.

One area where the EU and NATO should enhance cooperation is building security and stability to the south, argued Eduardo Ferro Rodrigues, President of Portugal’s Parliament.

“The south is a priority. Without peace and prosperity, access to education and progress in Africa, Europe becomes weaker,” he told the plenary. “Work for stability in the Sahel and Sub-Saharan Africa is in our common interest.”

Portugal’s President Marcelo Rebelo de Sousa praised the work of the Assembly in strengthening the democratic values that are a key foundation for the NATO Alliance. Defending those values in the current NATO modernisation process is crucial.

“We all have a shared responsibility to deliver,” the president said. “It is our democracies that will become stronger, it is our peoples who will be freer.”