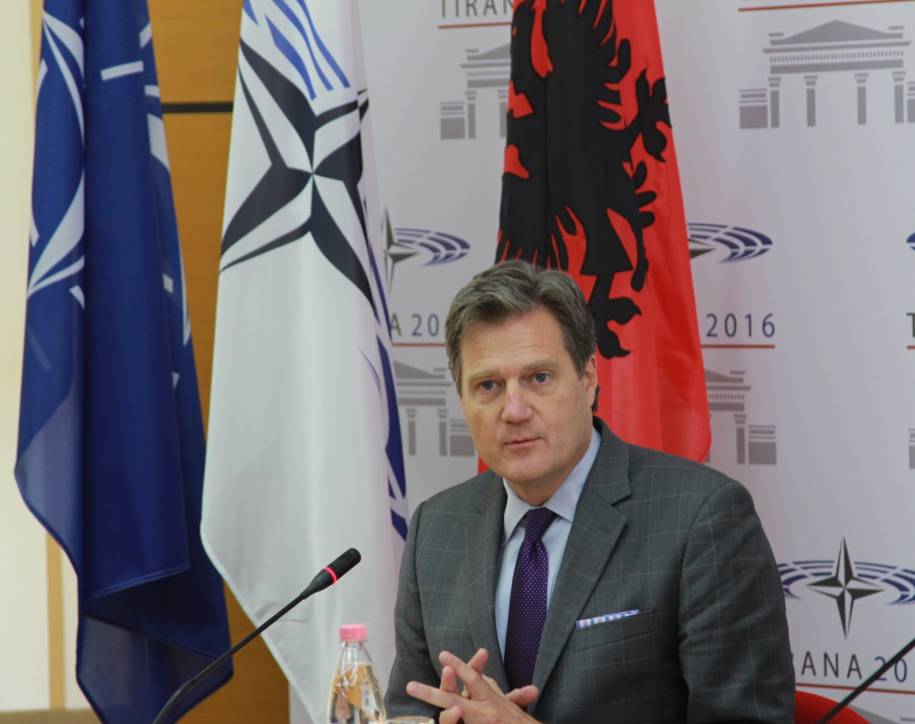 Tirana, Saturday 28 May 2016 – NATO must show resolve in the face of Russia’s increased military assertiveness and a greater willingness to share the burden of collective defence at the Alliance’s summit in July, the president of the NATO Parliamentary Assembly said Saturday.

“We are in a different environment with Russia having declared NATO an adversary,” US Congressman Michael R. Turner told reporters in Albania, during the NATO PA four-day Spring Session. “NATO needs to reassert itself”, Turner stressed, adding that, while dialogue and deterrence needed to be pursued together, “no portion of dialogue can lessen the need for collective defence and deterrence, including nuclear deterrence.”

He also urged the 28-member Alliance to reassure allies close to Russia’s borders in Eastern Europe and the Baltic states. That could be done by enhancing NATO’s forward presence in the region and ensuring that reinforcements can be rapidly dispatched if needed.

Turner and the head of the Albanian delegation hosting the session in Tirana, Pandeli Majko, welcomed NATO’s decision to invite Balkan neighbour Montenegro to take a seat at the alliance’s table as its 29th member.

Majko described the move as “absolutely good news” and said that “this will enhance stability and be an example to others in the region.” Turner said it would set an example to other aspirants and he encouraged “every NATO nation to accelerate the ratification of Montenegro’s accession.”

The Summit of NATO Heads of State and Government in Warsaw in July will also focus on the need for European allies to boost their defence spending, with the United States by far the alliance’s biggest budget contributor.

Turner noted that only five Allies are at or above the goal for defence budgets of two percent of gross domestic product; a benchmark that was reaffirmed at the last NATO Summit in Wales almost two years ago.

The NATO PA Spring Session will also review how NATO is responding to the range of challenges confronting allies and emanating from, among others, terrorism, the ongoing conflicts in Libya, Iraq and Syria, mass migration and the proliferation of missiles and weapons of mass destruction.

Legislators will also review the achievements of NATO’s Resolute Support Mission in Afghanistan, which the Foreign Ministers decided last week to extend beyond 2016, and exchange views on the challenges facing Ukraine.

The session will bring together more than 200 delegates over four days. NATO PA unites members of national parliaments from the 28 Allied nations as well as partner countries, observers and organisations. It is an essential link between the Alliance and national parliaments - and therefore, citizens in the Euro-Atlantic area.