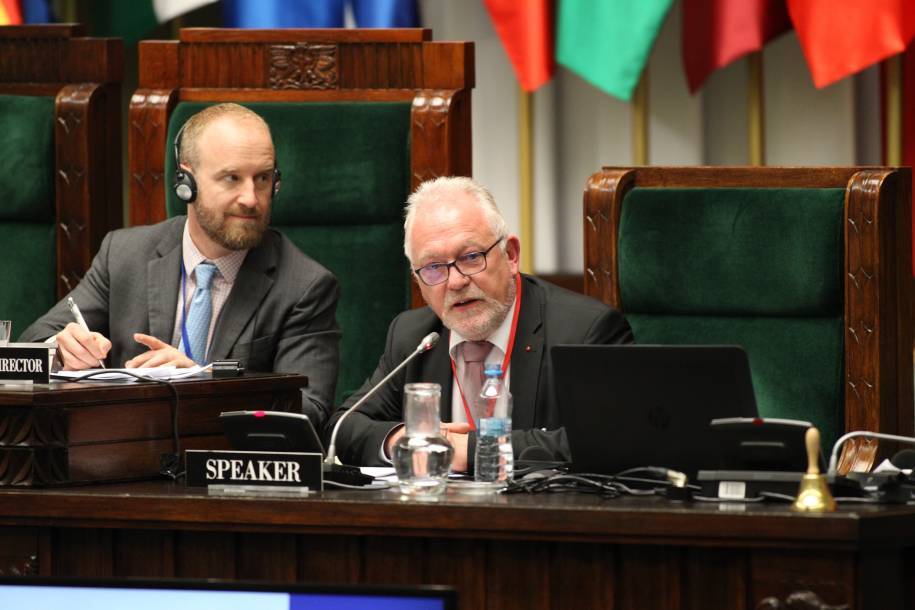 Today, Mr Wolfgang Hellmich (Germany) assumed his mandate of Treasurer of the NATO Parliamentary Assembly (NATO PA), taking over from Acting Treasurer Osman Askin Bak (Turkey). Mr Hellmich was elected to the position at the Annual Session in London, United Kingdom in October 2019. His mandate runs until 31 March 2022.

A member of the NATO PA since 2014, Mr Hellmich is looking forward to continuing to contribute to the Assembly’s work in this new role:

“Last year we celebrated the 70th anniversary of NATO, the most successful defence alliance in recent history and still the single most important guarantor of peace, prosperity and stability on the European continent. The NATO PA is an important body as it represents the parliaments of the member states and therefore makes it abundantly clear that NATO is not just an alliance of mutually assured security but also one of mutually shared values.”

In the NATO PA, Mr Hellmich is also a member of the Defence and Security Committee and has served as the Committee’s Special Rapporteur from 2015 to 2018. The Special Reports he authored for the Committee can be found here.

1.    How is your membership in the NATO Parliamentary Assembly important to your parliamentary work in Germany?

According to our constitution, the German Bundestag has fundamental decision-making powers over the equipment and deployment of the Bundeswehr, the parliamentary army. As we understand it, the provision of military forces must not lie solely with the executive, i.e. the government, but must be carried out in cooperation with the parliaments. This is the position the German delegates bring with them to the NATO Parliamentary Assembly. On the other hand, as delegates, we regularly report on the work of the NATO PA in the relevant committees of the German Bundestag. The reports that are adopted in the Assembly form an important information and working base in the committees of the Bundestag. And it is particularly important to get to know the state of the debates in the parliaments of the NATO states through the Parliamentary Assembly.

2.    From your perspective as Chairperson of the Defence Committee in the German Bundestag, what are your priorities for further strengthening NATO?

NATO is facing major challenges. On the one hand, military capabilities must be strengthened and further developed in the face of new threats such as hybrid warfare, modern technologies, the consequences of climate change, or current pandemics. Above all, the strengthening of European sovereignty as an important pillar in the transatlantic Alliance must be examined. On the other hand, NATO's political unity, based on its values and common foundations, must be strengthened, also in competition with authoritarian and non-democratic states. Here, I expect the upcoming Reflection Process, which can only be successful with the active participation of the Parliamentary Assembly, to take important steps towards strengthening NATO.

3.    From 2016 to 2018, you were the NATO PA’s Special Rapporteur on Afghanistan. How do you assess the current situation in Afghanistan and what is the way forward to achieve a lasting peace agreement?

A question that is not easy to answer. Afghanistan's domestic political situation after the elections is unclear and volatile; the partial withdrawal of the United States raises the question of the withdrawal of its forces for the Allied states and NATO; and the expectation of large sections of Afghan society that they will not be left alone in defending the progress they have made is more than justified. Also, because they have understood that the statement "in together, out together" is meant seriously. On the way to a peace agreement, which must be concluded between the Afghan government and the Taliban, the following steps are important in my view:

4.    What are your guiding principles as Treasurer of the NATO PA?

Of course, a first task of the treasurer is to ensure a balance of income and expenditure, i.e. financial stability. Here, the financing of the political tasks of the NATO PA as well as the social security and modernisation of the jobs of the employees of the NATO PA are in the foreground.

Here, priority goes to the seminars and conferences, which are places for encounters between parliamentarians – especially for delegates and young parliamentarians from countries that do not necessarily experience the transatlantic partnership within NATO in their everyday parliamentary life. But also the technical equipment of the workplaces, which enables digitally supported forms of work, must be reflected in the budget.

In short, I look forward to carry out my duties as Treasurer, to working with the parliamentarians and delegations of the NATO Allies, with the staff and secretariat in Brussels and with all those who want to contribute to more peace in the world with NATO.

To read the article in German, please click here.