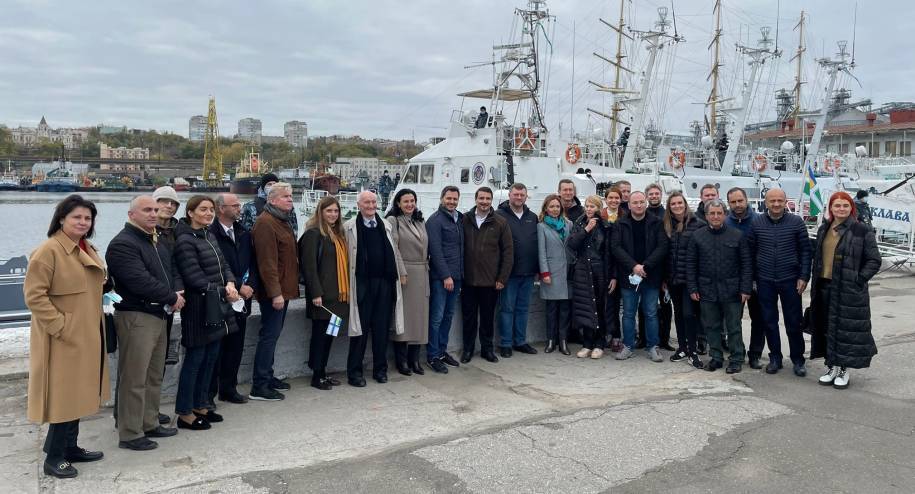 Ukraine hopes to receive strong signals and a clear membership pathway from NATO summits in 2022 and 2023, said Olha Stefanishyna, Deputy Prime Minister for European and Euro-Atlantic Integration of Ukraine, addressing a high-level gathering of parliamentarians from NATO countries, Ukraine and Georgia.

“Ukraine is making a significant contribution to strengthening Euro-Atlantic security. After all, we have never been a ‘consumer’ of security, but have been and remain an active contributor,” she argued. “We are convinced that further deepening of NATO-Ukraine relations will help not only strengthen the NATO Eastern flank, but also to become a powerful factor in deterring Russia from aggressive actions against our country.” She added that the new NATO Strategic Concept should not refer to Ukraine solely through the prism of Russian aggression.

Attila Mesterhazy, Vice President of the NATO Parliamentary Assembly (NATO PA), reassured Ukrainian counterparts that the Assembly “will continue urging our governments to support Ukraine’s Euro-Atlantic integration, to denounce Russia’s actions in eastern Ukraine and to never recognise the forcible and illegal annexation of Crimea.” He urged Ukrainian politicians to use Assembly meetings, especially the upcoming NATO PA spring session in Kyiv in May 2022, to further broaden and deepen political support for Ukraine’s Euro-Atlantic integration.

The biannual meeting of the Ukraine-NATO Interparliamentary Council (UNIC) took place in Odesa on 26 and 27 October. It also involved members of the Georgia-NATO Interparliamentary Council (GNIC) and the NATO PA’s Political Committee, bringing together 27 members of parliament from 12 countries.
First Vice Speaker of the Ukrainian parliament and UNIC Co-Chair Oleksandr Korniyenko highlighted the benefits of Ukraine’s status as NATO’s Enhanced Opportunity Partner and the strong popular and parliamentary support in Ukraine for NATO membership.

Vineta Kleine, Acting Director of the NATO Representation to Ukraine, stressed that, since 2014, NATO has significantly increased its practical support to Ukraine in terms of capability development and capacity building. NATO’s political support is solid, she said, as recently demonstrated by NATO’s strong reaction to Russian military buildup on the Ukrainian border in March and April 2021.

A prominent foreign policy expert, Bruno Lété of the German Marshall Fund of the United States, called on Western politicians not to hesitate to refer to Russia as an adversary and stressed that Ukraine’s membership in NATO is not a question of “if”, but a question of “when”. Ukrainian analyst Volodymyr Dubovyk regretted that the EU’s political presence in the Black Sea was insufficient, but expressed hope that the United States will act on the recent statements of its senior leaders that the Black Sea is a region of strategic importance for the US.

Russia’s militarisation of the illegally occupied Crimea and the restriction of freedom of navigation in the Sea of Azov was a recurring theme of the meeting. Anatoli Petrenko, Deputy Minister of Defence, presented Ukraine’s estimates of Russian military assets in the Black Sea and warned that the potential range of Russian Navy striking capabilities reaches up to 1,500 km.

Another deputy Defence minister of Ukraine, Hanna Maliar, said that Ukraine has been a target of Russian disinformation campaigns for years, aiming to keep Ukraine in the orbit of Russia's exclusive geopolitical influence. However, the Deputy Minister noted that Ukraine was learning to win the information wars and that Russia had failed to discredit Ukraine’s Euro-Atlantic choice and the credibility of the Ukrainian armed forces.

Irakli Beraia, head of the Georgian delegation to the NATO PA, noted that Russia deploys over 20,000 troops in the occupied Georgian territories. He called for greater NATO presence in the region and a clear roadmap for Georgian NATO membership. Turkish parliamentarian Ahmet Yildiz argued that the Black Sea will be more secure and stable if Ukraine and Georgia were under the NATO security umbrella.

The situation in illegally occupied Crimea was of particular concern to the participants of the meeting. Emine Dzhaparova, First Deputy Foreign Minister of Ukraine, highlighted the importance of the Crimea Platform initiative, designed to coordinate international efforts to peacefully return the illegally occupied peninsula to Ukrainian control. She thanked the NATO PA for its active involvement in the parliamentary dimension of the initiative through an informal support group in the Assembly. The next steps to further develop the initiative include broadening the circle of Crimea Platform participants, developing five specific work programmes, developing a network of focal points for a prompt reaction to crisis situations in Crimea and preparing a Black Sea security conference in February 2022, which is expected to be an annual event.

Anton Korynevych, Permanent Representative of the President of Ukraine in Crimea, briefed the delegates on the alarming human rights situation in occupied Crimea. He noted that systematic political persecution, physical and psychological pressure, annihilation of the independent media, discrimination on the basis of religion, violation of ownership and language rights forced more than 51,000 Crimean Tatars and Ukrainians to leave the occupied peninsula. There are more than 120 Ukrainian citizens, mostly Crimean Tatars, who are political prisoners detained by the occupying authorities. Russia is also changing the demographics of the region by relocating hundreds of thousands of Russian citizens to the peninsula.

NATO PA Vice President Attila Mesterhazy condemned Moscow’s decision to conduct a population census in the illegally occupied peninsula, in yet another violation of international law. He underscored the need to be firm on non-recognition policy and to explore other ways to peacefully return Crimea to Ukraine.
Parliamentarians also took stock of Ukraine’s progress implementing its comprehensive reform agenda.

Deputy Prime Minister Stefanishyna stressed that the current leadership in Kyiv was determined to capitalise on the presidential majority in the parliament and to achieve a real breakthrough on its ambitious reform agenda before the next electoral cycle.

“Ukraine has made significant progress in implementing a wide range of reforms,” she noted. Over the past year, “we have adopted important legislation and guidelines in security and defence sphere, including the laws of Ukraine "On Defense Procurement" and "On Intelligence" as well as the National Security Strategy of Ukraine. At this difficult time, facing Russia’s continued aggression with significant military forces accumulated along the border with Ukraine and in the occupied Crimea, Ukraine counts on NATO's assistance in supporting the reform’s agenda,” the Deputy Prime Minister said.

Mariana Bezuhla, Deputy Head of the parliamentary National Security, Defence and Intelligence Committee, updated NATO PA members on Ukraine’s progress in transforming Ukraine’s defence and security sector. She highlighted the effort to streamline Ukraine’s security agency and turn it into a modern counterintelligence service. She underlined the parliament’s resolve to revisit the procurement procedures and classified information policy in the defence and security sector in order to eliminate corruption and meet NATO standards. Ms Bezuhla also noted that Ukraine has achieved real progress in strengthening parliamentary oversight in the field of defence and security.
First Deputy Speaker Korniyenko briefed the participants on other aspects of Ukraine’s reform agenda and highlighted recent initiatives in terms of land reform, the banking system, decentralisation, the judiciary and anti-corruption. Some opposition MPs, however, expressed concern over the pace of some reforms and warned against potential rollbacks of reform initiatives launched under the previous administration. They called on Western partners to maintain their interest in Ukraine and continue urging Ukrainian authorities to advance the reform agenda.

On 27 October, delegates visited the Western Naval base in Odesa, where they were hosted by Vice Admiral Oleksiy Niezhpapa, Commander of the Ukrainian Navy.
On 27 and 28 October, NATO PA members also attended the annual “Odesa Debate”, a high-level conference hosted by the German Marshall Fund of the United States and the Boumbouras Foundation, designed to foster a dialogue between Ukraine and the transatlantic partners.

UNIC and GNIC are the respective parliamentary counterpart to the NATO-Ukraine Commission and the NATO-Georgia Commission. They were created by the NATO Parliamentary Assembly to demonstrate parliamentary interest and involvement in NATO cooperation with Ukraine and Georgia and to provide a forum where members can discuss any issues of mutual concern.