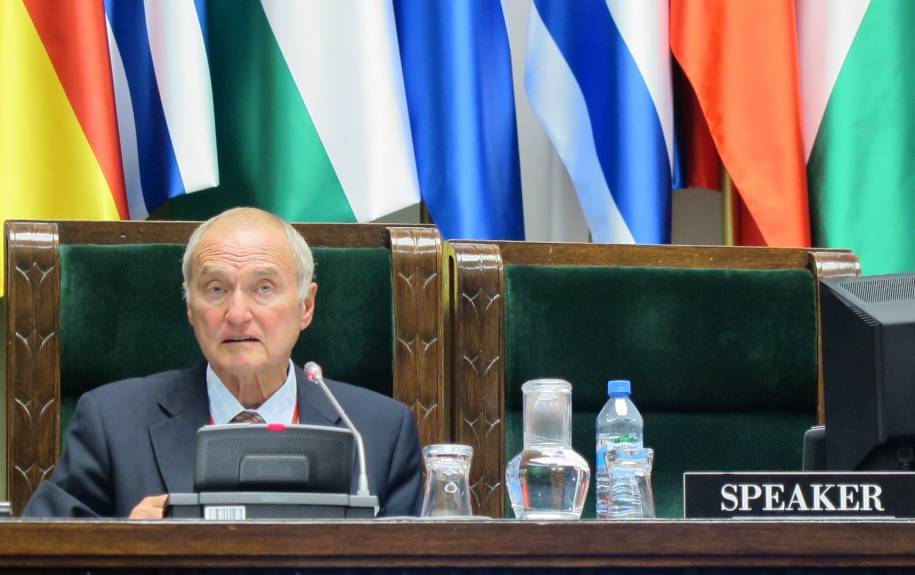 “The reason we must consider the further reinforcement of the eastern flank is simple: Russia’s brinkmanship continues and is escalating,” Canadian Senator Joe Day told members of the NATO PA’s Defence and Security Committee. “The conventional imbalance remaining in NATO’s eastern territories provides Moscow with an unnecessary hypothetical temptation – we must never give Russia any space to test the Alliance’s resolve,” he added.
Ensuring there are forces sufficiently powerful to deter any Russian escalation on NATO’s eastern borders was a key theme at the NATO PA’s Spring Session, held this year in Warsaw.

Lawmakers from the 29 Allied nations were expected to recommend that NATO leaders at their Summit in July commit to ensuring the continued sustainability and readiness of advanced forces stationed on the eastern flank since 2014 in response to Russia’s illegal military invention.
Russia has been rapidly beefing up its armed forces while NATO has slowed, Polish Defence Minister Mariusz Blaszczak told the Assembly’s Defence and Security Committee. “It now has a certain advantage over the allies,” he said. “Russia is better prepared to wage conventional warfare.”
NATO, he said, needs more high-readiness forces and improved training to better defend the territory of its members. Blaszczak noted, however, that deterrence forces already sent to the eastern flank had ensured that “any attack will be met with a swift and firm response.”

The Alliance has deployed four battlegroups to Poland and the Baltic States and additional multinational brigades to Romania. NATO’s Readiness Action Plan bolsters the number of forces deployable in an emergency to over 40,000 and establishes a spearhead Very High Readiness Joint Task Force which is positioned to deploy a 5,000-man brigade anywhere in the Alliance in 2 to 7 days.

A draft report presented by Senator Day nevertheless warned that Russia’s short term conventional advantage meant “Russia would still dominate any conflict in the short- to medium-term until the Alliance would be able to bring, likely across the Atlantic, overwhelming resources to bear upon the conflict.”
The danger was underscored by Andrzej Wilk, a senior expert at Poland’s Centre for Eastern Studies. “The Russian army is constantly exercising, as a result it is capable of deploying significant forces in different theatres very quickly,” he said. “What the Russian army is doing is preparing for a classic military conflict.”

In considering these challenges, the NATO PA debated a number of measures, including rotating more troops and equipment into the eastern region, notably air defence systems; reversing decades of defence cuts to counter Russia’s massive investments in force modernisation; building better infrastructure and removing bureaucratic barriers to facilitate the rapid movement of troops within Europe.

“We must do what we can as a group to thwart Russian aggression, because that is the purpose of NATO,” said US Congressman Ted Poe.