In Skopje, national and Western legislators upbeat on the European future of the Western Balkans 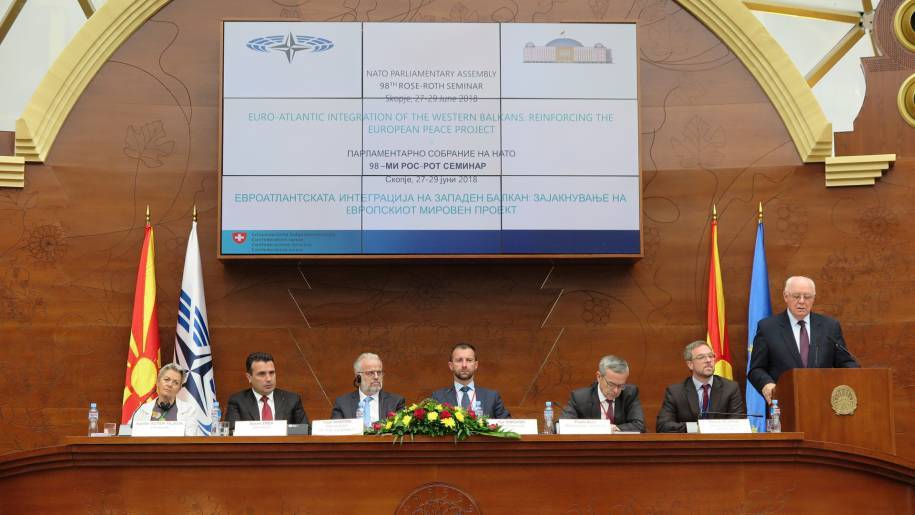 Brussels/Skopje, 6 July 2018 - This may have been one of the last instances when Western politicians visiting Skopje had to refer to the host country as “the former Yugoslav Republic of Macedonia”*. The NATO Parliamentary Assembly met in Skopje for its 98th Rose-Roth Seminar from 27 to 29 June, less than two weeks after the historic agreement on the name issue between Prime Ministers Alexis Tsipras and Zoran Zaev.

The Western lawmakers felt a palpable surge of optimism in Skopje after years of despair over the lack of progress towards European and Eur-Atlantic integration.

Prime Minister Zoran Zaev told NATO parliamentarians that his government considered the recent decision of the EU Council – to launch accession talks in June 2019, provided reforms continue – an important victory for the country. He also expressed hope that Allied leaders decide to start accession negotiations at the NATO Summit in Brussels on 11 and 12 July.

The Prime Minister, the speaker of the parliament Talat Xhaferi and other high-ranking government officials noted that the country has made a significant breakthrough in recent years both domestically – bolstering the democratic institutions, judicial and media independence, the rule of law and inter ethnic cohesion – and internationally, by signing milestone agreements with Bulgaria and Greece.

President of the NATO PA Paolo Alli commended the host country on rebuilding a culture of compromise, which is so fundamental to democracies, as well as on reinforcing its reputation as a serious partner in the region as well as for NATO and the EU. “When I address the Allied leaders at the Summit, I will make the case that you should become NATO’s 30th member”, Mr Alli said.

According to the keynote speaker of the seminar James W. Pardew, former US Special Envoy in the Balkans and former NATO Deputy Assistant Secretary General for Operations, history shows that the West neglects the Balkan region at great peril. “The US and Europe, who have invested so much in the region, must remain fully engaged in the Balkans and continue to consolidate local membership in the Alliance”, Mr Pardew argued.

Deputy Foreign Minister of Bosnia and Herzegovina Josip Brkic also stressed that his country has reached the limit in terms of registering defence property – the precondition for the activation of the NATO Membership Action Plan (MAP). He called on the Allies to recognize the progress made and to activate the MAP at the NATO Summit in July. He argued that this would be a strong stimulus for further reforms in the country.

During the three-day seminar, local and international experts, diplomats and government officials addressed the ongoing reform processes across all government sectors. The seminar also tackled other important topics for the Western Balkans, including the state of interethnic relations, the role of disinformation and misinformation in public discourse as well as the migration crisis and the Balkan Route.

This event was organised with the generous support of the Swiss Government and the Geneva Center for Democratic Control of Armed Forces. The Seminar brought together approximately 120 participants in total. The key objective of Rose-Roth Seminars is to facilitate dialogue on regional security matters among legislators from NATO and partner nations.
__________
* Turkey recognises the Republic of Macedonia with its constitutional name.