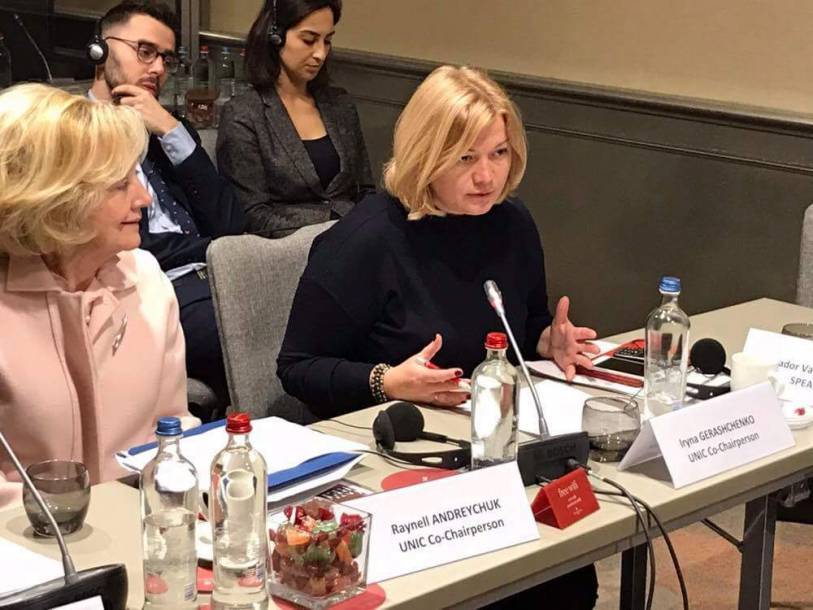 Brussels, 28 November 2017 – Celebrations of the 20th anniversary of the NATO-Ukraine Charter throughout 2017 have provided an opportunity for Allies and Ukraine to take stock of the achievements of our cooperation, as well as reaffirm the goals of our partnership for the future.

The Verkhovna Rada and NATO Parliamentary Assembly (NATO PA) have taken an active part in the celebrations of this important anniversary. The Ukraine-NATO Interparliamentary Council (UNIC) met in Kyiv in April, and the Rada hosted a Rose Roth seminar and special commemorative event in July – days before the historic visit by the North Atlantic Council to Kyiv. At its meeting in Bucharest in October 2017, the NATO Parliamentary Assembly accepted Ukraine’s offer to host the Assembly’s Spring Session for the first time in 2020.

Over the past 20 years, the strategic goals set by Ukraine for its cooperation with NATO have changed, but cooperation with NATO and the NATO PA have remained remarkably active throughout. Ukraine has also participated actively in NATO operations and missions. Since 2014, cooperation has expanded significantly. The Rada has adopted legislation making Ukraine’s membership in NATO one of the key priorities of Ukraine’s foreign policy – an objective, which according to polls, is supported by a growing segment of the Ukrainian population. Ukraine’s policy is now focused on achieving the standards required for eventual NATO membership.

During our meeting today, we reaffirmed our commitment to support Ukraine’s Euro-Atlantic integration through parliamentary cooperation. The Annual National Programme (ANP) and Comprehensive Assistance Package (CAP) provide tailored tools for extensive NATO-Ukraine cooperation. Their scope extends not just to security and defence matters, but also to the broader political, economic and legislative framework needed to ensure that the reform of Ukraine’s security and defence sector is sustainable and affordable, and incorporates best practices of civilian control as well as democratic and parliamentary oversight. In this sense, NATO-Ukraine cooperation supports Ukraine’s broader reform efforts, as well as the goals set in the EU-Ukraine Association Agreement.

We urge Ukrainian authorities to use the full potential of the ANP and the CAP, maintain the coherence and pace of reforms, and focus on the implementation of agreed priorities. The ANP’s goals, ambitions and timelines should reflect Ukraine’s objective of eventual NATO membership. Strengthening the rule of law and the fight against corruption remain key objectives, and entail the adoption of democratic standards and effective human rights protection mechanisms benefiting all citizens.

In turn, we urge Allied governments to deliver on the assistance pledged to Ukraine, and increase their support for Kyiv’s efforts towards maximum institutional rapprochement with NATO. To this end, we urge Allies to maintain the pace and intensity of the NATO-Ukraine political dialogue and cooperation at all levels.

As we have again today, we continue to condemn Russia’s illegal occupation of Crimea and direct support for members of the illegal armed groups operating in the region, as well as its use of cyber and information warfare and other destabilising actions. We remain firm in our support for Ukraine’s independence and territorial integrity. The full implementation of the Minsk agreements through the consolidation of the Normandy format and other mechanisms remains the best way forward in the occupied part of Donbas. We call for an urgent end to violations of the ceasefire, the provision of full and secure access to OSCE monitors, and rapid progress towards the release of hostages and prisoners illegally detained in Russia and in the occupied regions.

The UNIC was created in 2003 and brings together ten high-ranking parliamentarians from Ukraine with an equivalent number of their counterparts from NATO member countries. The Council normally meets twice a year: in Brussels and in Ukraine. Its aim is to demonstrate parliamentary interest and involvement in cooperation between NATO and Ukraine. Over the years, it has become an active political forum where members of parliament from NATO and Ukraine can discuss any and all issues of common concern and interest. The Council met in Brussels on 28 November under the co-chairmanship of Iryna GERASHCHENKO, Deputy Chairperson of the Verkhovna Rada of Ukraine and Raynell ANDREYCHUK, member of the NATO Parliamentary Assembly from Canada. During the one-day meeting, members of UNIC met with NATO and EU officials, as well as civil society representatives to discuss the current security situation in Ukraine, review the wide-ranging cooperation between NATO and Ukraine, and examine the implementation of urgent reforms.