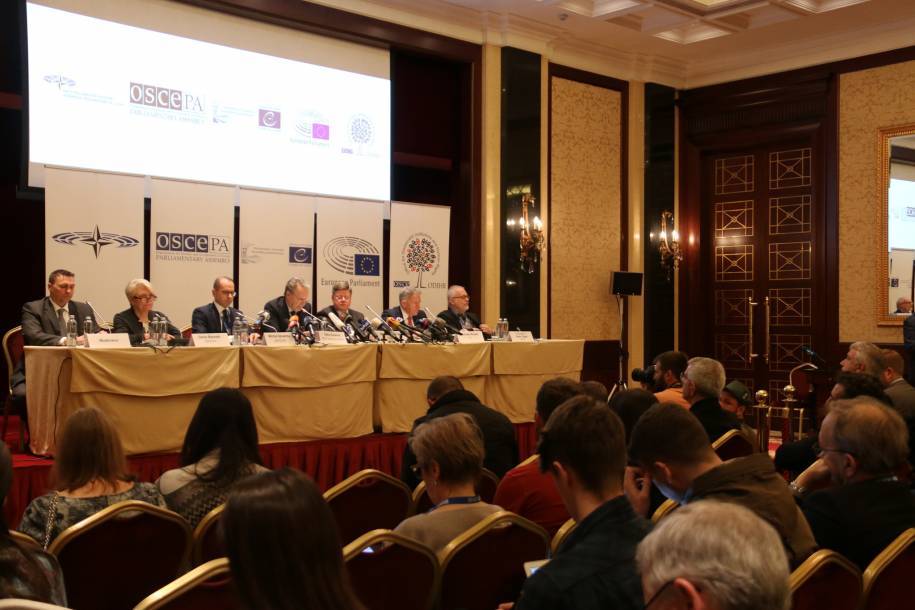 Kyiv, 1 April 2019 – Sunday’s presidential election in Ukraine was competitive, voters had a broad choice and turned out in large numbers. While the existing legal framework offers a sound basis for holding democratic elections, it was often not implemented in good faith by many stakeholders in the run-up to election day. This negatively impacted trust in the election administration, the enforcement of campaign finance rules, and the effective resolution of election disputes, the international observers concluded in a preliminary statement released today.

Fundamental freedoms were generally respected, and candidates could campaign freely, but numerous indications of vote-buying and the misuse of state resources undermined the credibility of the process. The media landscape is diverse, but campaign coverage lacked in-depth analysis and was often biased, the observers said.

“This competitive election has laid the groundwork for a vibrant second round,” said Ilkka Kanerva, Special Co-ordinator and leader of the short-term OSCE observer mission. “I hope that this will encourage Ukraine to continue on its path of democratic development, at peace and secure within its internationally recognized borders in our community of European values.”

Election day was assessed positively overall, and paves the way to the second round. Still, some procedural problems were noted during the count, and conditions for tabulation were at times inadequate, the statement says.

“We were pleased to see that the campaign was competitive but believe, nevertheless, that there are key legal issues that should be addressed as a matter of priority,” said Angela Smith, Head of the delegation from the Parliamentary Assembly of the Council of Europe (PACE). “PACE and the Council of Europe’s Venice Commission hope to continue their close co-operation with Ukraine in the field of democratic development.”

Doris Barnett, Head of the delegation from the OSCE Parliamentary Delegation, said: “Despite earlier concerns, election day was well administered and without disturbances. The Ukrainian people deserve praise for the conduct of these election. I have high expectations that the results, once confirmed, will be recognized, and that the second round will be just as peaceful, orderly and efficient.”

The election is taking place in the context of ongoing armed conflict and other hostilities in the east of the country and the illegal annexation of the Crimean Peninsula by the Russian Federation. As a consequence, the election could not be organized in Crimea and certain parts of Donetsk and Luhansk regions that are controlled by illegal armed groups.

“What I observed was a free choice by free people. Ukrainians demonstrated their strong commitment to democratic and Euro-Atlantic values. I saw the enthusiasm of citizens of all ages participating in the election process in impressive numbers,” said Michal Szczerba, Head of the delegation from the NATO Parliamentary Assembly. “However, I sincerely regret that not all could vote because Russia has illegally annexed Crimea and continues its military aggression in eastern Ukraine. The NATO PA will continue to assist Ukraine’s path of reforms and support its aspiration to join our Alliance.”

The election campaign was competitive and generally peaceful. However, there was lack of genuine political debate among the contestants. The overwhelming majority of the 39 candidates did not conduct any campaign activities, casting doubt on their intention to genuinely compete in the election.

Several candidates, on the other hand, campaigned throughout the country. Incumbent President Petro Poroshenko and Yulia Tymoshenko were most active, with Poroshenko’s extensive tours around the country blurring the line between his official position and campaign activities. Volodymyr Zelenskyi, who received the most votes in the first round, did not hold a single traditional campaign rally.

There was widespread criticism that the incumbent president used social assistance programmes, salary increases and other financial incentives as campaign tools. At the same time, ODIHR election monitors observed the abuse of state resources at the national and local levels by several candidates. More than 80 criminal investigations into alleged vote-buying have been launched, including two alleged nationwide schemes focusing on the campaigns of Poroshenko and Tymoshenko, respectively.

Rights and freedoms that underpin democratic elections are guaranteed in the constitution. The legal framework remains largely unchanged since the 2014 presidential election. Efforts at electoral reform were inconclusive, and most previous recommendations by ODIHR and the Council of Europe’s Venice Commission, including the crucial need to codify electoral legislation, remain unaddressed. Positively, the right of individuals to lodge constitutional complaints, introduced in 2016, allowed citizens and political parties for the first time to challenge election-related legislation.

“We have been here for eight weeks now, looking at all aspects of the election. There are loopholes in the laws, and these should not be abused,” said Ambassador Peter Tejler, Head of the election observation mission from the OSCE Office for Democratic Institutions and Human Rights. “It is important that stakeholders now implement the law in good faith. This will help build trust in the election administration and help to ensure a fair campaign.”

The Constitution guarantees freedom of expression and prohibits censorship. Nevertheless, the government has introduced a number of restrictive measures affecting the activities of the media and journalists, citing threats to national security. The media landscape is diverse but largely divided along political lines. The business and political interests of the owners affect the autonomy of private media outlets and the general trust in them. The public broadcaster is severely underfunded, which affects its ability to fully perform its public-service role.

There was also criticism of hastily adopted changes to the law on the Central Election Commission, particularly from civil society, which claimed that the amendments exclusively benefited the current president. This led to doubts from many sides about the Commission’s impartiality.

The State Voter Register contains the records of some 35.6 million voters. Despite some concerns about difficulties to adequately capture data on internally displaced persons (IDPs), internal labour migrants and citizens living abroad, there was general confidence in the accuracy of the voter lists.

For the full joint statement of preliminary findings and conclusions, please click here.

Photos from the OSCE PA election observation mission to Ukraine are available for public use on Flickr.