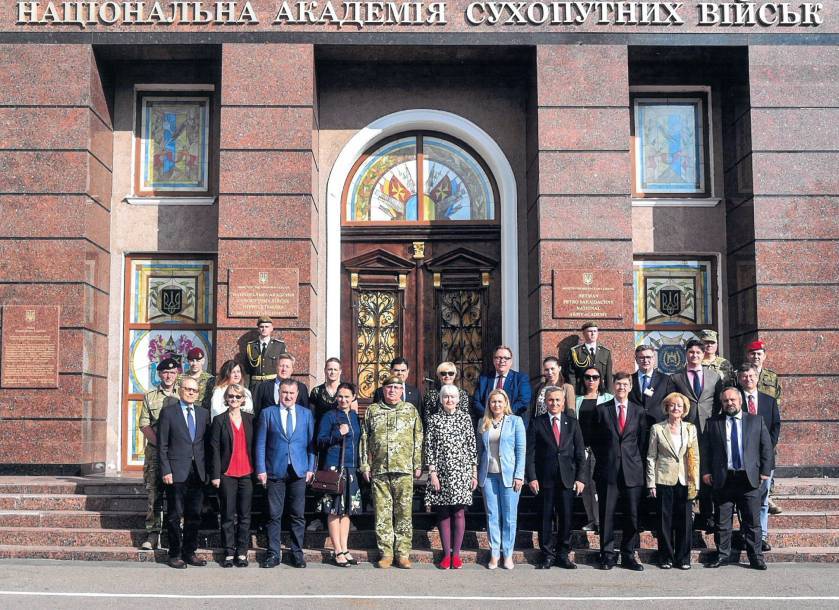 Lviv/Kyiv/Brussels - Ukraine will pursue its Euro-Atlantic course under President Volodymyr Zelensky, a delegation of the NATO Parliamentary Assembly (NATO PA) learned during a meeting of the Assembly’s Ukraine-NATO Interparliamentary Council (UNIC) in Lviv and subsequent high-level visit to Kyiv earlier this week.

Speaking at the opening of the meeting, NATO PA President Madeleine Moon noted Ukraine’s vital role for Euro-Atlantic stability and security and stressed the continuing support of the Assembly for Ukraine and its reform processes.  “By supporting Ukraine, the NATO PA also reaffirms its own mission to strengthen the zone of peace, freedom and democracy in Europe”, she said.

NATO Parliamentarians and Members of the Verkhovna Rada condemned Russia’s illegal occupation and militarization of Crimea and its ongoing political, military and economic support to the illegal armed groups operating in the occupied parts of the Donetsk and Luhansk regions of Ukraine.  Participants agreed that cooperation with NATO strengthens the ability of Ukraine’s institutions to deal with the whole range of security challenges, as well as the resilience of its society to hybrid and cyber threats and other forms of destabilization.

The range of issues discussed included Ukraine’s progress with reforms, particularly in the defence and security sector, the implementation of the Annual National Programme as well as the humanitarian and security situation in the East of the country.

Andriy Parubiy, Speaker of the Ukrainian Parliament, recognized that the assistance provided by NATO and individual Allies has been crucial for strengthening the country’s security and the ongoing reform process.  “Ukraine’s Euro-Atlantic integration is not just about security, but also about shared values and democracy”, he remarked.

Mr Parubiy and other host country representatives all expressed the view that there is no alternative to membership in the Alliance. This position was being underlined, they noted, by President Volodymyr Zelensky who had reaffirmed Ukraine’s Euro-Atlantic aspirations in all his foreign visits. Ukraine, however, needs a strong signal of support from the Allies, such as granting a Membership Action Plan, Mr Parubiy added.

Ivanna Klympush-Tsintsadze, Vice Prime Minister for European and Euro-Atlantic Integration, informed NATO Parliamentarians that a transition book about Euro-Atlantic and European integration is currently being drafted by the outgoing government.

Russia’s aggression against Ukraine continues, the delegation learned; host country speakers expressed concern about Moscow’s hybrid warfare against the country and its actions in the Sea of Azov. Vice Prime Minister Klympush-Tsintsadze said that Russia is “probing red lines” and expressed the hope that the NATO PA will help to ensure that NATO’s policy towards Russia is consistent.  She also warned that the upcoming parliamentary elections will provide an opportunity for Russian meddling.

Iryna Friz, Minister for Veterans affairs of Ukraine, described the difficult humanitarian situation in and around the conflict zone.  She reminded participants that Russia continues to violate the ceasefire and that over the past five years, some 13,000 Ukrainians – including 3,000 civilians – have died as a consequence of Russia’s occupation of Ukrainian territories.  Russia continues to hold illegally hundreds of Ukrainian hostages in its prisons, including filmmaker Oleh Sentsov as well as 24 Ukrainian sailors captured by Russia last November in the Kerch Strait, in blatant violation of international law. Russia also continues to shelter the criminals responsible for downing Malaysian airliner MH17, despite the unambiguous evidence gathered by international investigators.

Ukrainian members stressed that despite these serious challenges, Ukraine continues its ambitious reform process, including the law on national security, which is a significant milestone.  Other laws are also being drafted, including a law to establish a parliamentary oversight committee over the security sector.  This project has been developed based on Western models, the delegation learned.  NATO advisors expressed the hope that the new parliament will push this issue forward energetically.

President Moon reiterated the NATO PA’s support for Ukraine’s reform process and she acknowledged that progress has been achieved in tackling corruption, nepotism and the power of oligarchs while noting that the pace of the reform process needs to be sped up.  She expressed the hope that efforts will resume with renewed impetus following the parliamentary elections that will take place on 21 July.

NATO parliamentarians conveyed their firm support for Ukraine’s independence and territorial integrity and expressed the view that the full implementation of the Minsk agreements remains the best way forward in the occupied part of Donbas. All participants of the meeting called for an urgent end to violations of the ceasefire, the provision of full and secure access to OSCE monitors, and rapid progress towards the release of hostages and political prisoners illegally detained in Russia and in the occupied regions.

UNIC met in Lviv on 25 and 26 June.  During the two-day meeting, UNIC members met with Ukrainian government, regional, and NATO officials, as well as independent experts and students.  The delegates visited the Yaroriv Academy for International Peacekeeping and Security Centre (IPSC) and the Hetman Petro Sahaidachnyi National Army Academy where they also commemorated the latter’s graduates who lost their lives in the East of Ukraine with a wreath-laying ceremony.

Mr Klitschko opened the meeting by describing the many influences in his political journey from an upbringing in the former Soviet Union up to his present position in Ukraine.  The result was an impassioned testament to the values of freedom, democracy and the rule of the law.

In her meeting with President Zelensky, President Moon emphasised the Assembly’s long-standing support for Ukraine, support which had been redoubled since Russia’s occupation of Crimea and aggression in Eastern Ukraine.

President Zelensky reaffirmed his commitment to Ukraine’s Euro-Atlantic integration and to the reform process which he would like to see moving more rapidly.

He also welcomed the Assembly’s participation in the international election monitoring mission for the forthcoming parliamentary elections.

Both President Zelensky and Mayor Klitschko expressed their enthusiastic support for the Assembly’s 2020 Spring Session which will take place in Kyiv.

The Joint Monitoring Group with Ukraine was created in 1998 and adopted its current name - the Ukraine-NATO Interparliamentary Council - in 2003.  This body brings together ten high-ranking parliamentarians from Ukraine with an equivalent number of their counterparts from NATO member countries. The Council normally meets twice a year: in Brussels and in Ukraine. Its aim is to demonstrate parliamentary interest and involvement in cooperation between NATO and Ukraine. Over the years, it has become an active political forum where members of parliament from NATO and Ukraine can discuss any and all issues of common concern and interest.