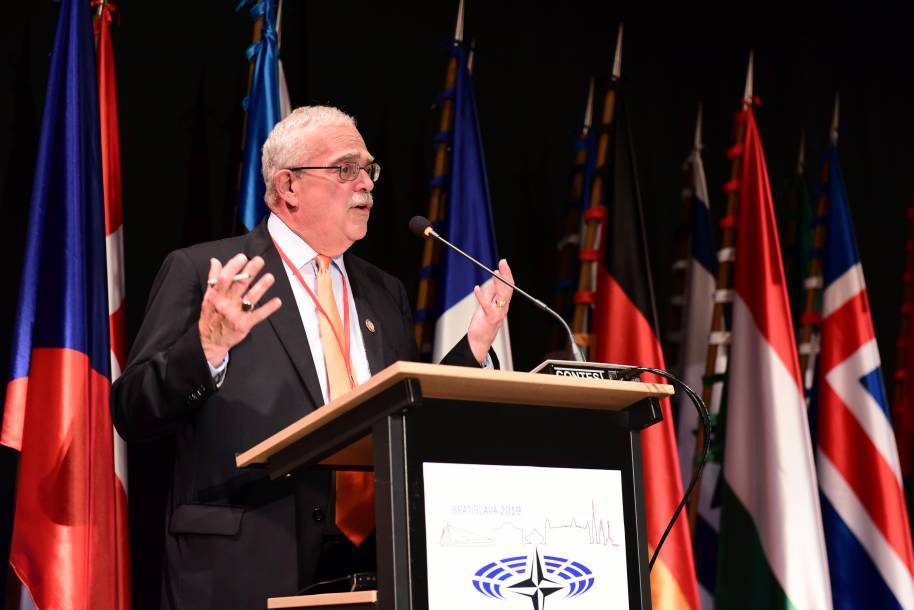 Bratislava, 2 June 2019 – NATO should mark its 70th anniversary with a reaffirmation of its core values to bolster unity as it faces increasing external and internal challenges, lawmakers from across the Alliance affirmed Sunday.

“If we, as Allies, do not uphold democracy, individual liberty, and the rule of law, we risk undermining the trust that binds us,” German legislator Ulla Schmidt told colleagues at the NATO Parliamentary Assembly. “We need to promote democratic values more proactively.”

Schmidt and US Congressman Gerald Connolly presented draft reports reflecting on seven decades of the transatlantic Alliance and NATO’s future role as it commemorates the April 1949 signing of the Washington Treaty.

They pointed to cyber attacks, political extremism, fake news, election interference, and political backsliding as posing new challenges to NATO nations and Alliance solidarity, with Russia frequently behind the spread of such threats.

“The values upon which the Alliance has been founded are being challenged by external enemies of democracy and by internal proponents of illiberalism,” Connolly warned. “These forces aim to undermine faith in and political support for our Allied democracies within our populations. It is therefore necessary to strengthen the resilience of our societies against these influences.”

Connolly and Schmidt proposed a series of recommendations for Allied governments to reinforce that resilience.

They include an update of NATO’s 2010 Strategic Concept to take into account factors such as Russian belligerence, the emergence of China, and new cyber and hybrid threats; the creation of a Democratic Resiliency Coordination Centre and other new institutions within NATO to provide oversight for common values and safeguard democracy within the Alliance; and heightened measures to guard against disinformation, hate speech, and election interference.

“Perhaps the most elusive but also the most daunting challenges are generated by democratic backsliding within the Alliance and increased polarisation of large parts of our populations,” Connolly explained. “The rise of nationalism in most of its incarnations is ideologically in opposition to the international cooperation, solidarity, and sacrifice that undergird the Alliance.”

The proposals in both reports are scheduled to be voted on by the NATO PA when it meets next October in London. The two lawmakers also called for NATO to upgrade its communications policies to provide positive, fact-based messages that counter misinformation campaigns from Russia and elsewhere. Outreach to younger people – who increasingly have no memory of the Cold War – should be prioritised.

Connolly concluded that “NATO remains as essential today as in the past 70 years.” He welcomed increases in Allied military budgets, but stressed the importance of all Allies implementing defence spending pledges, warning that failure to do so risks undermining Alliance unity.

Despite the challenges, NATO’s strength 70 years on remains evident, Connolly said. “The combined military capabilities of NATO Allies outmatch that of any other nation,” he stated. “No other country can field as many troops, tanks, aircraft, and ships as the 29 NATO member states.”