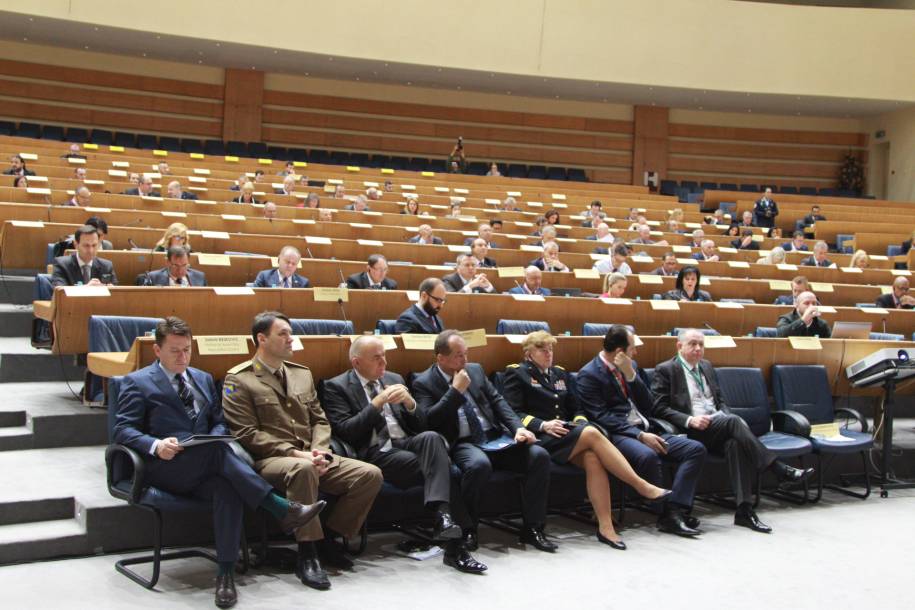 27 March 2017 - Several Western Balkan countries are in the midst of a serious political and economic crisis which is complicating their relations with the European Union and NATO. While the prospect of Euro-Atlantic integration remains the primary impetus for reform, the European Union is in the midst of an “identity crisis” which, in the eyes of many in the region, seems to have made prospects for accession more remote, thereby opening up opportunities for nationalist and sectarian movements to block reform, undermine accession efforts and reignite long-standing tensions throughout the region.

This was a central theme of a large NATO Parliamentary Assembly Seminar held in Sarajevo March 21-23 engaging NATO PA member, associate and observer parliamentarians including legislators from all the countries of the Western Balkans.

A more positive assessment came from Brigadier General Giselle Willz, NATO Commander in Bosnia and Herzegovina who said that the country has undoubtedly benefitted from its partnership with NATO and has undertaken important reforms of its defence institutions including the production of its first comprehensive defence review and the creation of multi-ethnic units meeting NATO standards. Yet failure to make progress on the registration of defense properties has made it impossible to move to the next stage and activate a Membership Action Plan.

Although there are technical reasons for these delays, in essence, the issue of registration has been politicised. No defence property has been registered in the Serbian entity - Republika Srpska. Nedeljko Cubrilovic, President of the Parliament of the Republika Srpska, noted that people of the Republika Srpska oppose the goal of NATO membership. Mladen Ivanic, the current Chairman of the Presidency of Bosnia and Herzegovina elected from the Republika Srpska, told the delegates that Bosnia and Herzegovina “should seek membership in NATO provided all Balkan countries join”, which is not a likely scenario in the foreseeable future. Nevertheless, there is consensus within the country’s leadership on the activation of the Membership Action Plan.

Stalled reforms are apparent throughout the region and can be linked to domestic political turmoil. In the former Yugoslav Republic of Macedonia[1], the President is refusing to bestow a mandate on a coalition of parties that clearly constitute a majority despite warnings from the EU and NATO that this goes directly against the grain of good democratic governance. Government has effectively ground to a halt in that country. Meanwhile, in Montenegro the opposition is boycotting parliament. Relations between Belgrade and Pristina have grown increasingly tense with Kosovar authorities announcing that they now want to create a regular army, an idea that NATO has indicated will undermine cooperation with the Alliance. Serbia is refusing to cooperate with Kosovo on a range of matters and, according to Marta Szpala, a Senior Fellow at the Centre for Eastern Studies in Warsaw, neither the EU nor the US has been sufficiently focused to help the parties overcome these disputes.

Although several speakers suggested that Russia can and should play a stabilising role in the Western Balkans along with the EU and the United States, it has rather tended to fan the flames of discontent in order to complicate the region’s integration with the EU and NATO. Savo Kentera, President of the Atlantic Council of Montenegro, directly accused Russia of seeking to destabilise his country in order to derail its accession to NATO. Russia has also exploited the Kosovo issue to gain leverage in Serbia. It has used its investments strategically to maintain influence and is generally understood to be supporting anti-NATO and anti-EU parties and movements throughout the region.

Milos Popovic, from the Belgrade Centre for Security Policy, suggested that poor economic prospects leave many vulnerable to demagoguery and misinformation. Popovic noted that based on recently polling only 9% of Serbian people would vote for NATO membership.

From March 21-23 parliamentarians from NATO PA member, associate, Mediterranean Associate countries as well as parliamentary observers gathered in Bosnia and Herzegovina for the 94th Rose Roth Seminar. The meeting entitled “The Western Balkans: Transition Challenges, European Aspirations and Links to the MENA Region” was a joint seminar with members of the NATO PA’s Mediterranean and Middle East Special Group and was the fourth Rose-Roth Seminar held in Bosnia and Herzegovina.