In a world of “systemic competition”, NATO Summit must reaffirm unity and commitment to democratic values 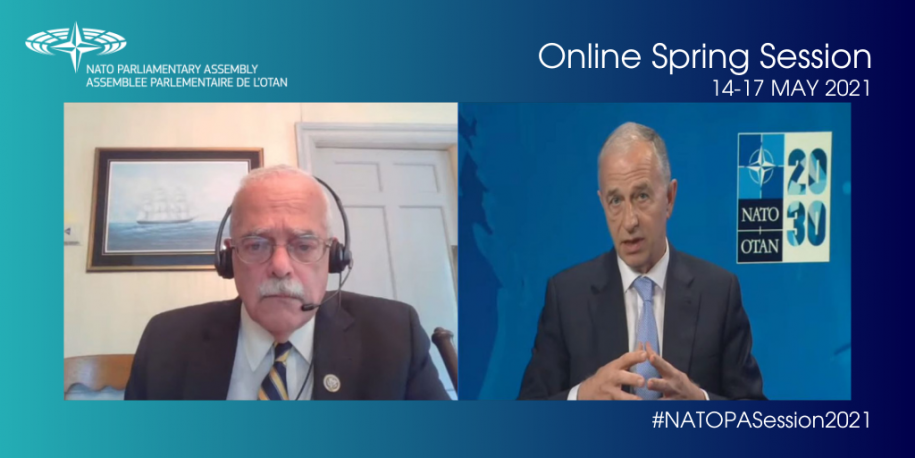 NATO must reaffirm unity based on shared democratic values as it confronts “systemic competition” from Russia and China and a range of challenges from terrorism to climate change and the COVID-19 pandemic, the President of the NATO Parliamentary Assembly Gerald E. Connolly said Monday.

“Our commitment to democracy, human rights and the rule of law distinguishes us from autocratic alliances,” said US Congressman Connolly. “Without it, we would be just another military bloc.”

Joined by NATO’s Deputy Secretary General Mircea Geoană, Mr Connolly spoke at the close of the Assembly’s 2021 Spring Session and had a clear message for NATO leaders as they prepare for a crucial Summit on June 14.

“The NATO Summit offers a unique opportunity to open a new chapter and reinforce NATO as the enduring embodiment of the bond between Europe and North America, based on our shared democratic values and collective security,” he said.

The commitment to values cannot be a “mantra that we repeat routinely in Summit communiqués”, Mr Connolly cautioned. Instead, NATO should take concrete action to underpin support for democracy. This includes establishing a Centre for Democratic Resilience within NATO – a proposal endorsed by the Assembly in 2019.

The Summit should also uphold a firm NATO response to Russia’s efforts to destabilise Allies and partners.

“We must maintain a united posture that imposes costs and consequences on Russia’s aggressive behaviour,” Connolly told the meeting, which gathered lawmakers from around the 30-nation Alliance and its partners. “At the same time, we must engage Moscow in credible, serious and clear-eyed dialogue, when it is in our interest.”

Other Summit priorities should include speaking with a united voice over relations with China; preserving NATO’s technological edge; and reinvigorating partnerships with like-minded democracies.

NATO’s ongoing withdrawal from Afghanistan should be done in a way that “preserves the important gains of the last two decades.”

Given the array of challenges, Allies need to stick to defence spending commitments and the NATO’s door should remain open to aspirant members.  “I am confident the Summit will reaffirm, for example, that Georgia and Ukraine will become members of NATO and that our door remains open to Bosnia and Herzegovina,” Mr Connolly said.

Deputy Secretary General Geoană told Assembly member and partner parliamentarians that “As we are drawing down in Afghanistan, we are stepping up our response to other global challenges: from Russia’s pattern of aggressive behaviour, to brutal terrorism, sophisticated cyber-attacks, disruptive technologies, climate change and the rise of China.”

“All of these challenges are too great for any country – or any continent – to face alone,” he stressed. “But together, through NATO, the nations of Europe and North America are not alone.”

He also assured the Assembly that the Summit would have an “ambitious and forward-looking agenda” that strengthens Alliance unity, broadens NATO’s approach to security, including through resilience and innovation initiatives, takes a “more global approach to safeguard the rules-based international order” and recommits to shared democratic values.

“It will be a unique opportunity to future-proof our Alliance, to re-energise the transatlantic bond and demonstrate our commitment to transatlantic solidarity, not just in words, but in deeds,” he told participants.

Mr Geoană also underscored the role of the Parliamentary Assembly in the NATO 2030 reflection process on the Alliance’s future.

“NATO 2030 is also an important opportunity to recommit to our values, strengthen our democracies and protect our institutions,” he said. “This starts with you, the defenders of our democratic ideals and the linchpin between our elected governments and the people you represent.”

The four-day Spring Session was due to have been held in partner country Sweden but was forced online by the coronavirus pandemic. The NATO Parliamentary Assembly’ Annual Session is due to meet next in October at its Annual Session in Lisbon.