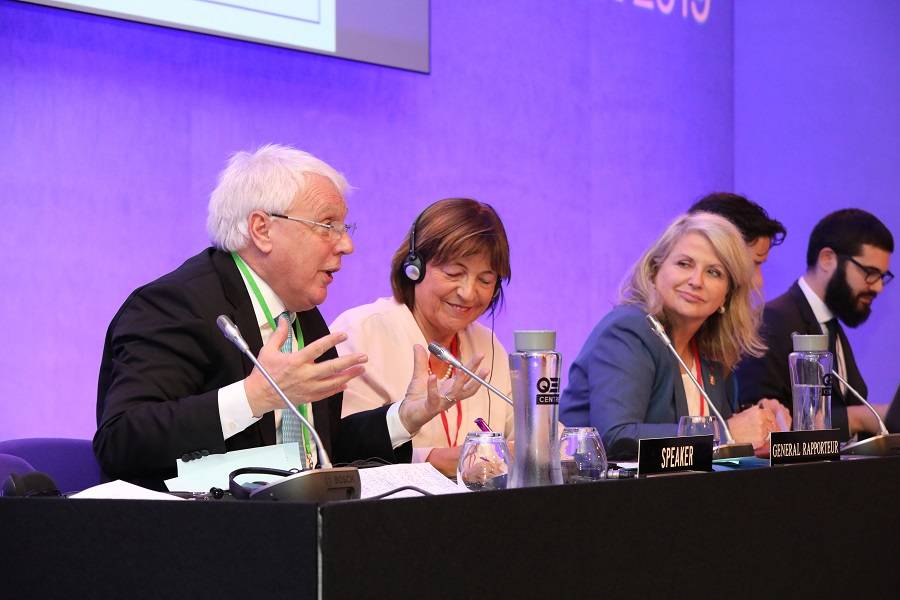 London, 12 October 2019 – Seventy years after it was founded, NATO faces potentially greater challenges than during the Cold War or the Balkan crises of the 1990s, as cyber and hybrid warfare, climate change and terrorism test the Alliance in new, previously unimagined ways, parliamentarians and experts said Saturday.

Today, NATO no longer has the luxury of fighting one challenge at a time, participants of the NATO PA’s Annual Session agreed in London.

“The problem today is that you need three NATOs, not one,” Jamie Shea, Professor of strategy and security at the University of Essex told the Assembly’s Committee on the Civil Dimension of Security.

Shea, who worked at NATO for 39 years, said these are a classical military NATO, one that is able to tackle hybrid threats, and one that projects stability to the Middle East and the Arab world.

In two draft resolutions, expected to be adopted during the NATO PA plenary session on Monday, Portuguese delegate Julio Miranda Calha and German parliamentarian Ulla Schmidt, highlighted the need to restore imbalances in allied defence spending and to reaffirm commitment to the Alliance’s core values of democracy, individual liberty and the rule of law.

In the Political Committee meeting, US Congressman Gerald E. Connolly welcomed the vast improvement in NATO’s ties with the European Union and the Alliance’s intention to keep its doors open to potential new members as a tool “to spread the zone of stability and democratic stands in Europe.”

But he and Schmidt both voiced concern about “destabilising forces that threaten our community,” such as disinformation – both from within and outside the Euro-Atlantic community – which undermines democratic elections and public trust in mainstream political parties.

They urged Allied governments and parliaments to set up a structure within NATO that would monitor and report on the democratic credentials of countries wanting to join, as well as check for any negative trends among the Allies themselves.

“One useful approach could be to increase oversight of democratic backsliding or human rights violations within the Alliance. This could take one or more institutional forms: a new monitoring committee; assigning the responsibility to a senior official; or the creation of a special ombudsperson,” Schmidt said.  In a similar vein, the report of Congressman Connolly recommends the creation of a “Democratic Resiliency Coordination Centre” to help NATO member states strengthen democratic institutions.

In the meantime, Connolly said, “we must maintain our focus on cyber and hybrid security— especially with respect to disinformation and elections. At the same time, we should encourage efforts to tackle the root causes of public discontent— from migration to income inequality.”

The draft resolutions call for NATO’s Strategic Concept – its long-term vision for confronting threats and keeping the 29-nation Alliance agile and responsive – to be updated to reflect all these modern challenges and underline the importance of shared democratic values.

“I think the next 70 years are likely to be more dramatic and probably much more interesting than the last 70 years,” Shea said.