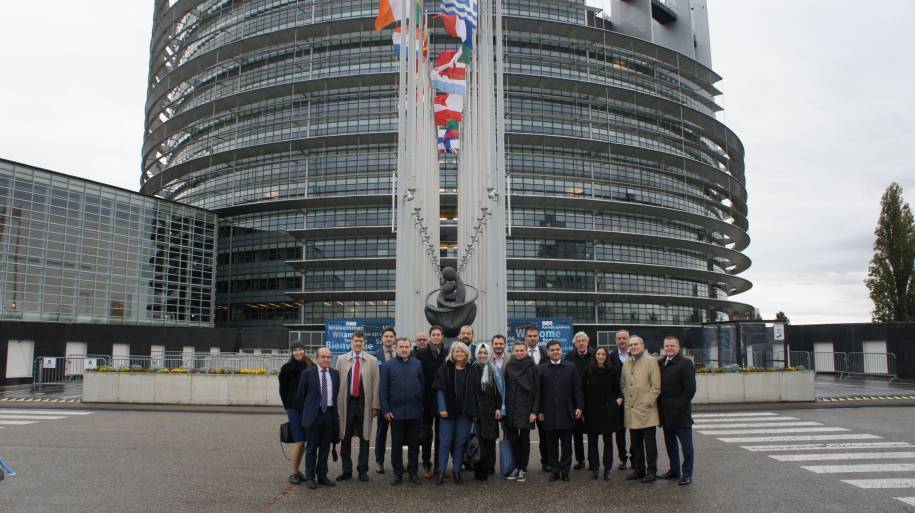 Brussels, 15 November 2019 - In the aftermath of the terrorist attacks in Paris and Nice in 2015 and 2016, France overhauled substantially its counter-terrorism policies. However, the threat of a homegrown terrorist attack by radicalised individuals remains a concern, Laurent Nuñez, France’s Secretary of State to the Minister of the Interior, told the visiting NATO Parliamentary Assembly delegation on 4 November.

France’s approach is based on the view that  law enforcement measures alone are insufficient and that it is important to tackle the ideology of violent jihadism, which contradicts the principles of the Republic. It was stressed, however, that this ideological fight is conducted without prejudice against any religious or ethnic group.
The Assembly delegation, led by French Senator Joëlle Garriaud-Maylam, Chair of the NATO PA Committee on the Civil Dimension of Security (CDS), visited France’s largest Fleury-Mérogis prison and was briefed on the comprehensive programmes designed to assess those convicted of terrorist offences to determine how best to deal with them.  A relatively small proportion were deemed too dangerous and committed to be open to deradicalisation efforts, and the majority could be dealt with by addressing issues such as alienation and re-integration within the normal processes of detention.  Some 12 to 15 per cent, however, were assigned to one of six deradicalisation centres in France which seek to reduce their commitment to violence and radical ideologies.

The delegation also visited Strasbourg, a city that suffered a terrorist attack in December 2018, to discuss the efforts of regional and local authorities in preventing extremism and terrorism. The delegation was told that France’s comprehensive approach to this problem is bringing tangible results. One should not be complacent, however, since the situation in the Middle East could result in an increased number of French nationals returning from the conflict zone, the delegation heard.

While in Strasbourg, the delegation also held meetings with the representatives of the Council of Europe (CoE). They reminded participants of the remarkable record of the CoE institutions in protecting human rights on the continent since 1949.

Dunja Mijatović, CoE Commissioner for Human Rights, told the delegates that her office is overwhelmed with activities as the amount of human rights problems across the CoE area is daunting. In particular, she mentioned the issues relating to the treatment of refugees, the sometimes excessively strict anti-terrorism laws, attacks on journalists and human rights activists, restrictions of judicial independence and the rights of national minorities. Regarding the refugee/migration crisis, Ms Mijatović noted that it is entirely manageable by Europe.  She deplored the rise of xenophobic rhetoric as well as the lack of solidarity, empathy and political will in some European capitals. “We are failing as human beings”, Ms Mijatović said.

CoE interlocutors warned that the European system of human rights protection is facing existential challenges as several member states, and Russia in particular, are increasingly neglecting the rulings of the European Court of Human Rights (ECHR). Russia’s declaration that its national laws would take precedence over the ECHR decisions was particularly damaging, the delegation heard. ECHR judge Paulo Pinto Albuquerque warned that the erosion of the European human rights protection system could jeopardise peace on the continent.

During the exchanges, members of the NATO PA expressed deep regret that the Parliamentary Assembly of the CoE chose to lift sanctions on the Russian delegation. They argued that such a decision sends the wrong signal to future violators of human rights and international law and undermines the credibility of the CoE.

During the 4-day visit, the NATO PA CDS delegation, which consisted of 17 legislators from 11 NATO member and partner countries, also discussed France’s broader foreign policy priorities, its efforts to tackle disinformation as well as its cyber security strategy. The delegation visited the operational center of the EU Agency EU-Lisa to discuss the Union’s efforts to improve border security. The delegates also participated in the opening session of the annual World Forum for Democracy in Strasbourg, titled “Is Democracy in Danger in the Information Age?”