Instability in the MENA region linked to insecurity on the African continent, NATO parliamentarians heard during a visit to the African Union 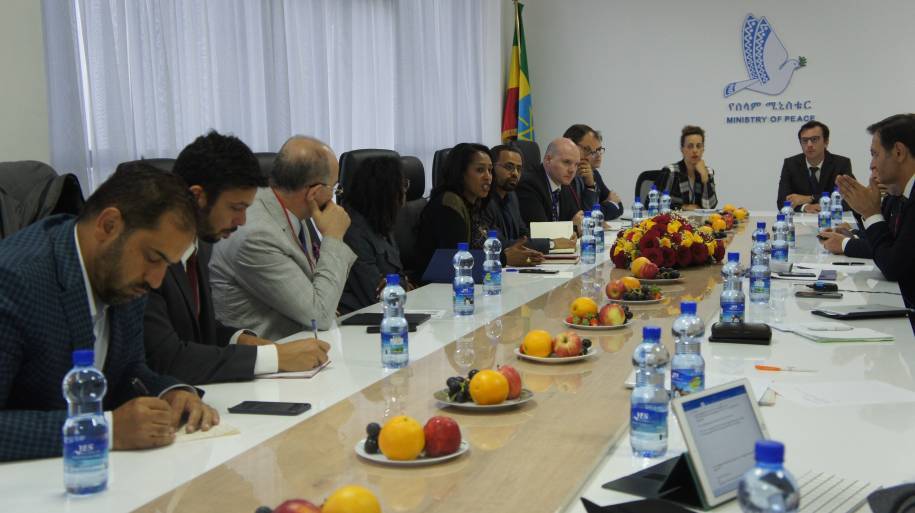 Addis Ababa / Brussels, 01 October 2019 - NATO must pay attention to security developments in Africa as there is a close interconnection between the stability of the Middle East and North Africa (MENA) region, and that of the Euro-Atlantic area, a delegation of the NATO Parliamentary Assembly (NATO PA) learned during a recent visit to Addis Ababa, Ethiopia.   “What happens in Africa does not stay in Africa” was a point made by one of the delegation’s interlocutors.

Existing economic, social, and environmental conditions, as well as poor governance and limited state capabilities, hamper the African Union (AU) from making faster progress towards a more stable continent, the delegation learned during three days of exchanges.  However, considering the short time since its inception, the AU has made appreciable progress in advancing peace and stability on the continent, international diplomatic representatives stressed.  In the security field, the AU has increasingly taken on the responsibility for peace support operations and for peace enforcement, even if the AU’s focus remains limited to conflict mediation and prevention.  The progress achieved in Somalia in the last 20 years, as well as in Sudan, where the AU has been the key mediator, are concrete examples.  At the same time, however, the AU’s effectiveness is limited by the fact that it is not a supranational organisation like the EU.  In comparison with the EU, the AU - which has 55 member states - is far behind in political integration of its member states, which means that institutions designed to protect human rights and democracy remain fragile.  The lack of political integration and limited resources are also a reason why implementation of AU decisions has been lagging, according to interlocutors in Addis Ababa.  Financing of the AU remains an issue, as 40% of the organisation’s budget is provided by other donors, particularly the European Union.

The need for more cooperation between NATO Allies and the EU on one side and the AU on the other side is obvious.  While Africa is a potentially rich continent with abundant resources, large parts are underdeveloped. Interlocutors in Addis Ababa considered this underdevelopment to be the root cause of insecurity and instability, and climate change will increase the tension between people and land, as is already visible in the Lake Chad region.  Africa is also the continent with the largest demographic expansion.  At the same time, with an average annual growth rate of between 4 and 5%, Africa is the second fastest economically growing region of the world, and the AU’s decision to create a common market Continental Free Trade Area (CFTA) has the potential to substantially boost economic development.

The Director for Social Affairs at the AU's HQ, Ms Cisse Mariama Mohamed, emphasised that “Africa is a place of hope and investment” but noted that the issue of migration is changing perceptions and narratives in EU and NATO member countries.  However, intra-Africa migration accounts for 80% of all migration flows on the continent, she pointed out and argued that both sides need to harmonise the perspective and philosophy of legal migration flows.  To Africans, it appears that European and industrialised countries consider the issue of African migration to Europe primarily from the perspective of how best to prevent it.  She attributed this to the rise of far-right parties in Europe and explained that African countries need to keep their talented young people to advance their own development.

The need to institutionalise democratic and participating governance was emphasised by the Director of the AU’s Political Affairs Department, Khabele Matlosa.  Progress in the areas of security and peace will create a conducive environment for development, he said, adding that the AU’s vision of Africa is that of an integrated, prosperous and peaceful continent, representing a dynamic part of the international community.  Dr Matlosa pointed out that military coups are no longer a big security concern in Africa, which is also due to the AU’s zero tolerance approach in this area.  Other political and economic issues which impact security on the continent remain, however.  These include a trend towards “tenure extension” where incumbent political leaders remain in power after their mandate expires.  Moreover, corruption is a big challenge; according to the latest report by Transparency International, 6 of the 10 most corrupt countries of the world are located in Africa.

Cooperation between NATO and the AU was welcomed by all participants.  The exchanges revealed a general consensus that NATO and Africa share a number of common security concerns, such as terrorism, radicalisation, illegal migration, and environmental concerns.  The main area of the AU-NATO partnership is information and intelligence exchange, although NATO also plays an important role in capability development of military and security tools for the AU and AU member states.  There is, however, room for improvement as there is still a “hangover” among African states from NATO’s engagement in Libya in 2013, which, according to one international interlocutor, led to a perception of NATO as a “war machine” among African countries.  African nations also perceive the West as having ignored African security issues for too long.  Overall, however, the delegation learned that there is a consensus that the relationship between the AU and NATO is developing positively, albeit slowly, and that there is ample opportunity for a closer and more effective partnership.

The European Union is a major donor of assistance to the AU and plays an important role in the stabilisation of Africa, the delegation learned.  In 2016, 95% of AU peace and security operations were funded by the EU; like NATO, the EU also supports capacity building, and  its support for the AU’s continental early warning system is a key focus.  The main focus of the work of the EU Mission to the AU is the broader Sahel and Libya.

The delegation was also briefed about the engagement of the United Nations (UN) in Africa, and the cooperation between the UN and the AU, as well as the support provided by US Africom to African countries.  Unlike the EU, the UN, and NATO, US Africom focuses on bilateral support for individual countries.

Ethiopia plays a stabilising role in the region and is a security provider for the region, according to Ms Almaz Mekonnen, State Minister for Peace building.  Stable and peaceful neighbours are a prerequisite for a secure Ethiopia, she noted and stressed the need to bring stability to the Horn of Africa.  Ms Hirut Zemene, State Minister for Foreign Affairs, underlined that Ethiopia is a strong believer in multilateralism and in collective security.  She added that transnational issues like climate change and population growth can only be tackled successfully by close international cooperation.

The primary reason for the visit was to improve understanding of Africa’s security dynamics and to obtain an update on cooperation between the AU and NATO.  AU and Ethiopian views on regional security issues and their implications for security in the MENA region were also high on the agenda.
The NATO PA delegation included 14 Parliamentarians from eight NATO member states, representing the NATO PA Sub-Committee on NATO Partnerships (PCNP) and the Sub-Committee on Transition and Development (ESCTD).  The delegation was led by PCNP Chairman Miro Kovac (Croatia) and also included NATO PA President Madeleine Moon (UK) as well as Assembly Vice-Presidents Vitalino Canas (Portugal) and Osman Askin Bak (Turkey).  The three-day visit on 23-25 September included meetings with Dr Khabele Matlosa, Director of Political Affairs, and Ms Cisse Mariama Mohamed, Director of Social Affairs at the African Union, Colonel Omur Kosemehmet, NATO Senior Military Liaison Officer (SMLO), Gerald Mitchell, Head of the UN Mission to the AU, Ms Almaz Mekonnen, State Minister for Peace building, and Mrs Hirut Zemene, State Minister for Foreign Affairs.  A briefing by Abdeta Dribssa Beyene from the Centre for Dialogue, Research, and Cooperation, an independent Ethiopian think tank, concluded the visit.