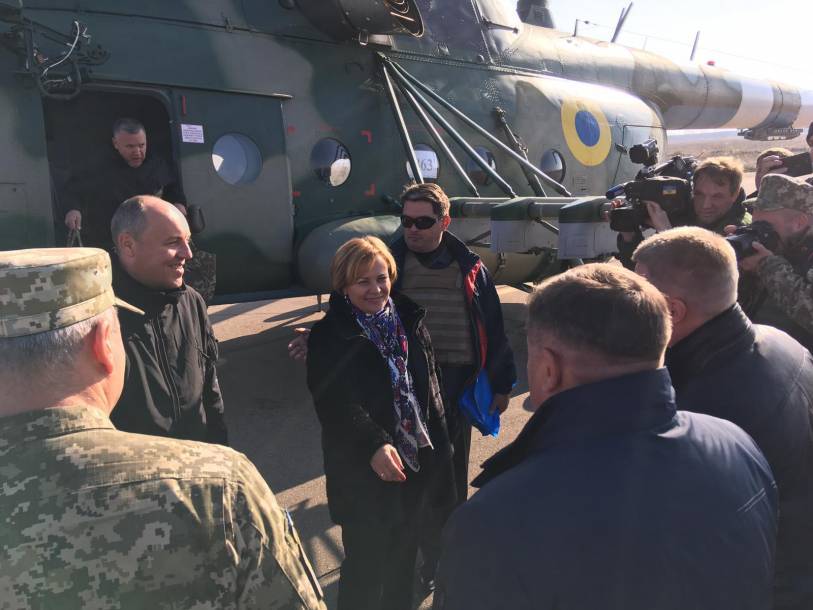 Mariupol / Shirokyne, 9 November 2018 - NATO Parliamentary Assembly President Rasa Jukneviciene visited Ukrainian forces in Eastern Ukraine today at the invitation of Ukrainian President Petro Poroshenko. She was accompanied by Chairman of the Verkhovna Rada of Ukraine Andriy Parubiy and the Head of the Ukrainian delegation to the NATO PA, Iryna Friz.

Relations with Eastern partners are one of Ms Jukneviciene’s priorities. “Through this visit, I wanted to convey to our Ukrainian friends and to the Ukrainian soldiers fighting to defend their country’s sovereignty that we are fully aware of the challenge that Ukraine faces, and that Allies stand in solidarity with Ukraine in the face of Russia’s ongoing aggression.”

During her visit, Ms Jukneviciene stressed that NATO Allies support Ukraine’s sovereignty and territorial integrity, and its right to decide its own future, and provide advice and support for its reform process. The NATO PA, which is independent from NATO, can help by raising parliamentarians’ awareness about the situation in Ukraine, supporting Ukraine’s reform process and Euro-Atlantic integration, and combatting Russian disinformation and propaganda, she noted.
"The Ukrainian issue stands high on the agenda of the NATO PA, and our members understand that what is taking place here is not a “Ukrainian crisis”. It is an ongoing aggression by Russia against the sovereign state of Ukraine," Ms Jukneviciene emphasized.

Ms Jukneviciene condemned the holding of so-called elections in the occupied parts of Donetsk and Luhansk regions. “It is high time to unequivocally denounce these so-called “fake” elections, which will never be recognized by any democratic state or the NATO Parliamentary Assembly,” she stated.
This was Ms Jukneviciene’s second visit to Ukraine in two months. During her previous visit to Kyiv in October 2018, she met with Ukrainian President Poroshenko, Rada Chairman Parubiy and other senior leaders of the Ukrainian government and parliament.

Ukraine is due to host the NATO PA’s spring session in 2020. This would be the first NATO PA session in the country.
Read more