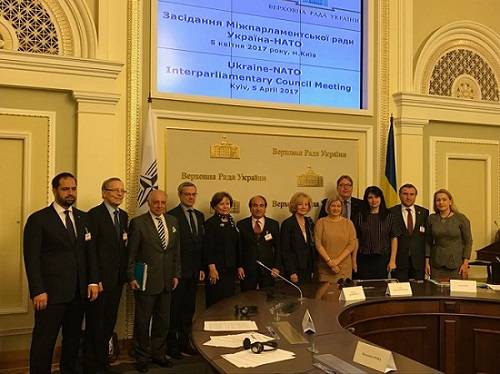 Kyiv, 5 April 2017 – “Ukraine continues to face serious challenges to its security. We firmly condemn Russia’s ongoing illegal occupation of Crimea and direct support for armed militants in Donbas. We reaffirm our full support for Ukraine’s sovereignty and territorial integrity, and call for an immediate end to the daily violations of the ceasefire and for the full implementation of the Minsk agreements through the consolidation of the Normandy format and other mechanisms.

Ukraine has made clear that the strategic objective of its Euro-Atlantic integration process is to achieve the standards required for eventual NATO membership, an objective reiterated in recent policy documents including the National Security Strategy, the Military Doctrine, the Concept for the Development of the Security and Defence Sector, and the Strategic Defence Bulletin. Streamlining of efforts has improved thanks to the work of the office of the Deputy Prime Minister for European and Euro-Atlantic Integration and the special intergovernmental coordination committee.

We also note the significant growth in support for NATO among the Ukrainian people, including growing support for potential NATO membership.

The Annual National Programme (ANP) remains the main tool through which Ukraine defines the concrete objectives of its cooperation with NATO. We welcome the progress achieved under the ANP for 2016, and look forward to the prompt adoption of the ANP for 2017. We urge Ukrainian authorities to use the full potential of the ANP and of the Comprehensive Assistance Package adopted by Allies and Ukraine at the Warsaw Summit in July 2016. The ANP’s goals, ambitions and timelines should reflect Ukraine’s objective of eventual NATO membership.

Reform objectives should extend beyond the armed forces to the broader security and defence sector, including the Security Service of Ukraine, and be spelled out comprehensively in the future framework Law on National Security.

Efforts should also focus more on the broader political, economic and legal objectives set in the ANP, including strengthening the rule of law and the fight against corruption. If used to its full potential, the ANP can be a truly transformational tool for Ukraine.

To this end, parliament and civil society need to be more closely involved in monitoring and supporting implementation of the ANP.

The Verkhovna Rada is committed to playing its part in supporting ANP implementation and related reforms. However, more needs to be done to strengthen parliamentary control over the policies related to Ukraine’s Euro-Atlantic integration, particularly through the work of the Rada’s committees.

In turn, we urge Allies to deliver on the assistance to the reform of Ukraine’s security and defence sector, continue to develop the Comprehensive Assistance Package, and enhance efforts to promote better public information about NATO.

We also call on Allied parliamentarians to continue to build support for Ukraine in their national parliaments and maintain our unity and resolve.

As the parliamentary counterpart to the NATO-Ukraine Commission, UNIC provides an essential forum for members of parliament to monitor and support the objectives of NATO-Ukraine cooperation, and we intend to make full use of this forum in 2017. We look forward to Ukraine’s hosting of a Rose-Roth seminar in July, which will coincide with the celebrations of the 20th anniversary of the Ukraine-NATO Charter on a Distinctive Partnership.”

UNIC was created in 2003 and brings together ten high-ranking parliamentarians from Ukraine with an equivalent number of their counterparts from NATO member countries. The Council normally meets twice a year: in Brussels and in Ukraine. Its aim is to demonstrate parliamentary interest and involvement in cooperation between NATO and Ukraine. Over the years, it has become an active political forum where members of parliament from NATO and Ukraine can discuss any and all issues of common concern and interest. The Council met in Kyiv on 5 April under the co-chairmanship of Iryna GERASHCHENKO, Deputy Chairperson of the Verkhovna Rada of Ukraine and Raynell ANDREYCHUK, member of the NATO Parliamentary Assembly from Canada, and with the participation of Andriy PARUBIY, Chairman of the Verkhovna Rada of Ukraine and Paolo ALLI (Italy) President of the NATO Parliamentary Assembly. During the one-day meeting, members of UNIC met with Ukrainian government and NATO officials, as well as civil society representatives to discuss the current security situation in Ukraine, review the wide-ranging cooperation between NATO and Ukraine, and examine the implementation of urgent reforms.