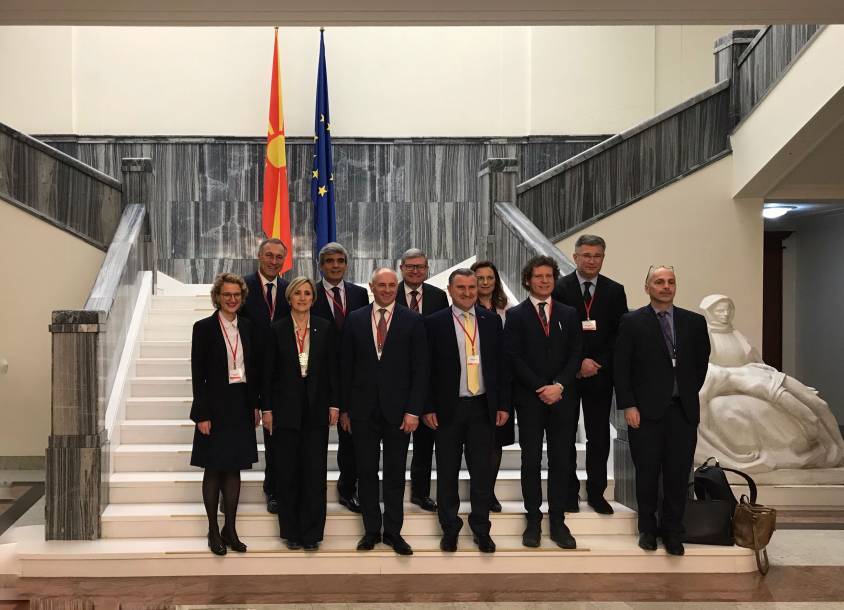 Skopje/Brussels, 18 March 2019 – After many years of active candidacy for NATO membership, the Republic of North Macedonia is now on the road to full membership following the resolution of the name dispute with Greece. Eight NATO member parliaments have ratified the accession protocol since it was signed at NATO headquarters in February, and others are expected to do so over the coming months. Membership is not only expected to help consolidate the Republic of North Macedonia’s democratic transition and deepen the sense of security in the Western Balkans, but it has also galvanised foreign investment, reinvigorated momentum for deeper reform, and could therefore represent a launching point for the country’s candidacy for European Union membership.

A delegation of national parliamentarians visiting Skopje under the auspices of the NATO Parliamentary Assembly, discussed these and other issues with their counterparts in the Assembly of the Republic of North Macedonia, senior government ministers, diplomats, and policy experts during a two-day fact-finding mission to Skopje on 14-15 March.

Speakers from the country and from the diplomatic community stressed that the Prespa Agreement had required enormous courage and that leaders in Skopje and Athens had provided hope to a region which has long been plagued by national, ethnic and sectarian tensions. The Republic of North Macedonia’s Foreign Minister Nikola Dimitrov told members of the NATO Parliamentary Assembly’s Sub-Committee on Transition and Development that after the upheaval of 2015-16, his country had decided that it had to assume responsibility for a range of problems and that signing the Prespa Agreement was an essential step in doing so.

Prime Minister Zoran Zaev told the delegation that the accession of his country will have a very positive impact and will help consolidate security there. He said this will help the international community to increase attention on the region’s more enduring conflicts including ongoing tensions between Pristina and Belgrade and the political stalemate and institutional crisis in Bosnia and Herzegovina.

The benefits of following this bold and politically risky course of action are already apparent. Not only did the treaty signed with Greece immediately put the Republic of North Macedonia on a path to NATO membership, but it also generated economic benefits.  Kreshnik Bekteshi, the Minister of Economy, told the delegation that economic growth is now on the rise, and there has been an important influx of foreign direct investment into the country since the Prespa Agreement’s signing. Last year, he noted, the country attracted EUR 624.6 million in foreign investments. That figure, he added, is expected to rise to more than a billion euro this year.

The Republic of North Macedonia, however, continues to face difficult transition challenges. The name issue had long blocked the path to NATO and EU membership and this, in turn, dulled the reformist impulse and even led to democratic backsliding. This was particularly evident during the political crisis of 2015-2016 when democracy itself was clearly put at risk. But there are other enduring problems, including persistent corruption, a poor education system, a large informal sector, a steady exodus of young educated people to EU countries, and shortcomings in the judicial and legal systems.

Political leaders in Skopje believe that the realistic prospect of Euro-Atlantic integration will make it possible for the country to embark on broader and deeper reforms that will address these problems. This process is already underway with the creation of a new anti-corruption commission and an important reform of the security sector, which will make it far more difficult for security agencies to engage in lawless domestic spying—a problem that became very evident in 2015.

That more than 80% of citizens support the country’s Euro-Atlantic aspirations should help build support for further reforms, local officials stressed. They also pleaded for EU leaders to recognise the country’s progress by agreeing to open accession negotiations at the upcoming European Council meeting in June.

The delegation concluded the mission by meeting with Defense Minister Radmila Šekerinska. She told the delegation, led by NATO PA Vice-President Osman Aşkın Bak and Italian MP Matteo Bianchi, Vice Chair of the Sub-Committee, that her country has gone through 18 Membership Action Plans and participated in numerous NATO missions. This has helped prepare the country’s armed forces and its political class for NATO membership. She stressed that once the Republic of North Macedonia becomes a full-fledged member of the Alliance, it will be a provider of security. She noted that it would host a large military exercise involving several Allies this summer and plans to reach the 2% of GDP defense spending target by 2024.

Minister Šekerinska, Speaker Talat Xhaferi and members of the Assembly of the Republic of North Macedonia from both majority and opposition all urged members of the delegation to bring these messages back to their parliaments as they consider ratifying the accession protocol to NATO. They expressed their hope that, with the NATO PA’s support, the ratification process could be completed earlier than expected, allowing North Macedonia to join NATO at the Summit of Heads of State and Government planned in London in December 2019.

The Sub-Committee visited Skopje in connection with a report on the Macedonian economy which it will be discussing this year. A first draft of the report, authored by Lithuanian MP Aušrinė Armonaitė , will be presented at the NATO PA’s spring session in Bratislava, Slovakia, on 31-3 June 2019.