Parliamentarians look at the commercial and strategic implications of “new space” 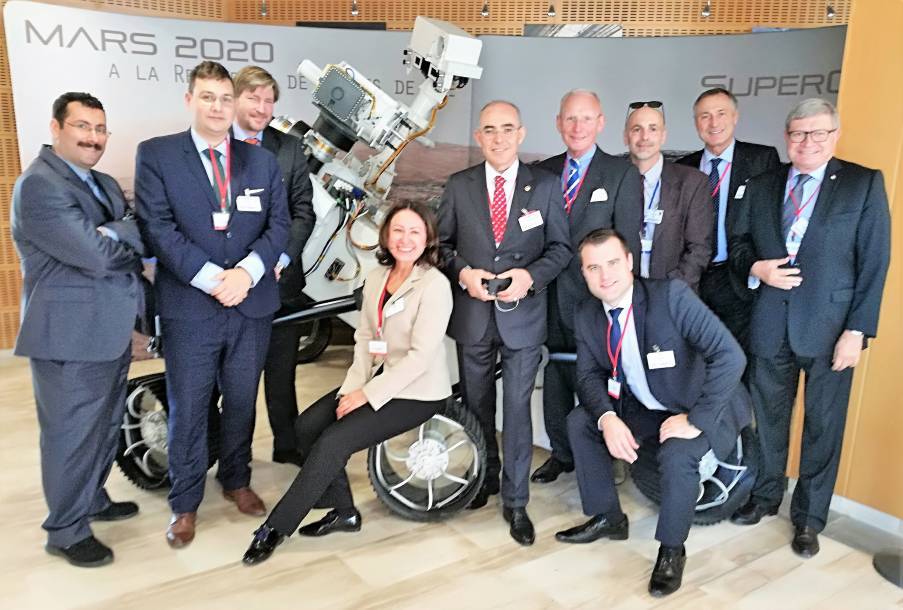 Paris / Toulouse / Brussels, 10 October 2018 - The space realm is evolving rapidly, and as it does, new commercial vistas are opening up that will transform the global economy. France has emerged as a leading player in space and is a driving force in Europe’s collective quest both to derive benefits from these markets and to shape them. But as the commercial stakes and number of players increase in what is now frequently referred to as “new space”, and with the global economy growing ever-more dependent on space-based digital and communications systems, there is a rising potential for the space realm to become a domain of strategic and military rivalry.

This was a central message that a group of national legislators from the NATO Parliamentary Assembly took away from a three-day trip to Paris and Toulouse from 3-5 October 2018.

Jean-Paul Granier, from France’s Directorate General for Armaments, told the delegation that the space domain has been a central element of French military doctrine, but Western nations now must update strategies to cope with the “new space phenomenon”. He noted, for example, that given counter satellite technology that rival nations are now deploying, satellites increasingly require surveillance and anti-jamming capacity to ensure their own survivability. Situational awareness is not only essential to counter aggressive actions by rival states, but also to cope with the growing problem of space debris generated by human activity in space.

Mastering the space domain also brings important terrestrial benefits. Toulouse has become the centre of the French and indeed European space industry and its economy is booming. Jean-Luc Moudenc, the Mayor of Toulouse and President of the Toulouse Metropole, told the delegation that Toulouse has always played a leading role as it hosted the country’s fledgling aviation sector during World War I. Since then, it has been the engine of France’s aviation and space sectors. Today commercial partnerships extend throughout the world and Toulouse has become a cosmopolitan technology hub of international importance.

Toulouse and the region around it hosts a cluster of aerospace engineering companies and research centres including Airbus, the Centre national d’études spatiales (CNES) and a university system that partners closely with these industries. This has spawned a virtuous circle, in which basic and applied research are generating insights and technologies with consequential commercial and strategic implications, Mayor Moudenc reported. The space and aviation sectors in the region are growing rapidly, triggering a boom in innovation and economic growth. The region around Toulouse is now generating thousands of jobs due to advances in aviation technologies, satellite production and a host of sectors that support these industries or spin off from them.

The delegation consisted of 11 members of the NATO Parliamentary Assembly’s Sub-Committee on Trans-Atlantic Economic Relations. It was led by two of its Vice Chairs Jean-Luc Reitzer of France and Christian Tybring-Gjedde of Norway. French Senator Jean-Marie Bockel hosted the delegation and helped organise the visit, which included tours of facilities at Airbus Defence & Space, CNES, and Thalès-Alénia-Space in Toulouse and Arianespace Launch Services in Les Mureaux outside of Paris.

Senator Bockel is the Rapporteur of the NATO PA’s Economics and Security Committee and is currently revising a report on the Future of the Space Industry, which will be presented at the Assembly’s annual session in Halifax, Canada this November. An early version of that report can be found here.