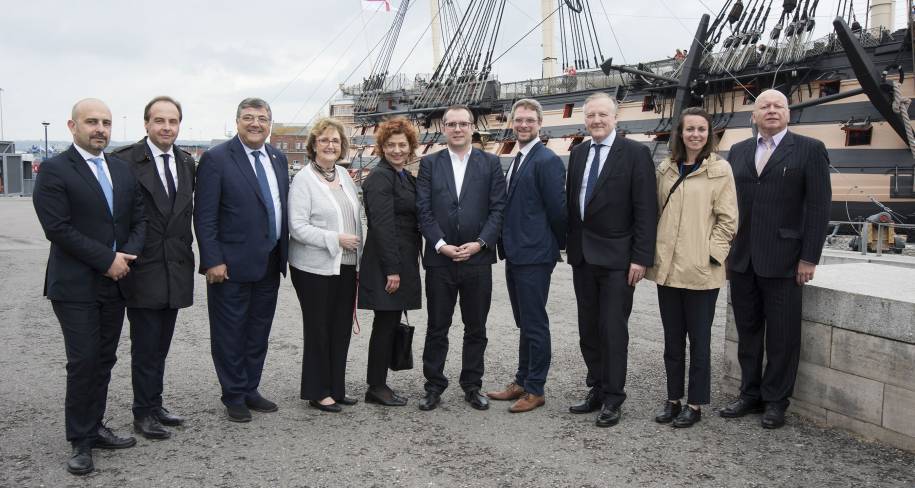 London, 20 June 2019 - In today’s world, scientific innovation originates mainly in the private commercial sector and driving technological change through defence science and technology (S&T) is very difficult, Dr Simon Cholerton, the UK Ministry of Defence’s Chief Scientific Adviser, told a delegation from the NATO Parliamentary Assembly during their visit to London last week. Except in some niche areas, “the days of transforming technology through defence are over,” he argued.

Allies must become better and quicker in turning S&T into real defence capabilities. This was a key message during a visit of the Science and Technology Committee’s (STC) Sub-Committee on Technology Trends and Security (STCTTS).

Over four intensely focused days in London and the South of England, 14 MPs from 10 Allied nations explored how to turn cutting-edge science and technology into concrete capabilities for their armed forces. The delegation was led by STCTTS Vice-Chairperson Bruno Vitorino (Portugal).

Throughout the visit, three areas of technology were in the spotlight: cybersecurity, artificial intelligence, and anti-submarine warfare.

As the STC continues to push Allies and NATO to maintain NATO’s edge, the parliamentarians discussed these issues with officials from the UK’s Ministry of Defence and National Cyber Security Centre, Allied Maritime Command, defence industry, and the Royal United Services Institute (RUSI).

NATO’s armed forces must tap into ideas in the non-defence sector and rapidly turn S&T into capability through demonstration and experimentation.

Nick Barsby, Chief of Staff at the UK Defence and Security Accelerator (DASA), argued that innovation takes time. DASA speeds up this process by finding and funding innovation through, among other, open calls, hackathons, market analyses, and competitions.

James Willis, a Managing Director at Qinetiq, a UK-based defence company, argued defence could no longer wait a decade to develop a new capability. Through “prototype warfare”, the company seeks to shorten the capability development cycle by experimenting and testing new designs with military operators in the field.

Vice Admiral Hervé Bléjean, Deputy Commander of NATO’s Allied Maritime Command, also stressed the high value placed on demonstrating S&T in exercises and other activities. Maritime unmanned systems will be part of Allied navies in the future, for example. Commanders need to experiment to understand and adapt to this new reality, but also to understand how competitors could use such systems against Allies.

The biggest challenge in bringing S&T to the operators is building and maintaining trust, which is hard to develop and easy to lose, argued Dr Kevin LePage, Programme Manager at NATO’s Centre for Maritime Research and Experimentation in La Spezia.

Defence S&T is a “team sport”, Dr Cholerton told members. UK defence S&T must be “international by design”, said Dr Bryan Wells, the MOD’s Head of International and Strategic Research. Visiting the MOD’s Defence Science and Technology Laboratory (Dstl), the delegation heard how it always considers international partnerships from the outset. As a result, the UK involves about 1,000 scientists and engineers in NATO S&T activities, for example.

The delegation also had the opportunity to tackle other issues, such as NATO’s challenges in the maritime domain, recent developments in European Union and UK defence policies, the Iranian nuclear programme and security dynamics in the Gulf, and China’s technological challenge.

An official summary report of the visit will be published on the NATO Parliamentary Assembly’s website at a later stage.