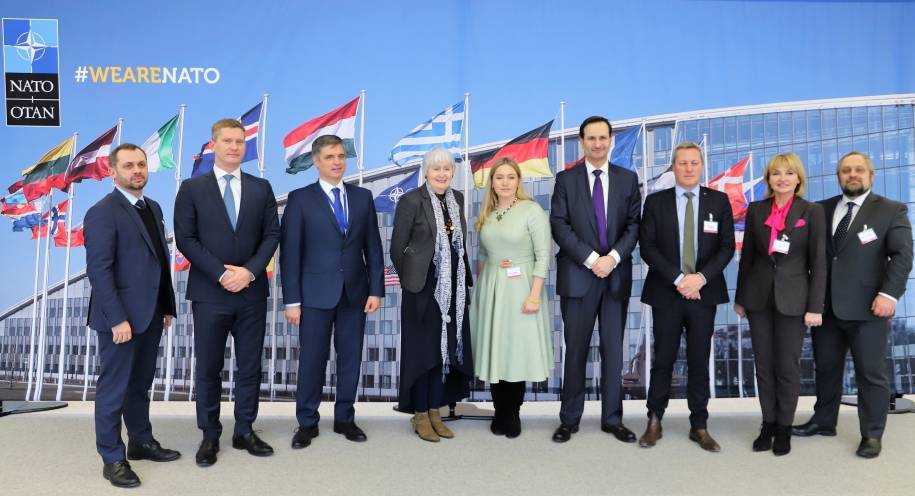 The meeting was held as Russia continues to detain the three Ukrainian navy ships it seized in the Kerch Strait on 25 November 2018, and their crew. All participants condemned Russia’s escalation in the Kerch Strait and the Sea of Azov.  NATO officials saw no justification for the way Russia acted and stressed the urgency of ensuring freedom of navigation to and from the Azov Sea.

“Some people try to portray this as a complex issue,” Madeleine Moon, President of the NATO Parliamentary Assembly, remarked. “But it is in fact very simple, and we should be very clear about it: Russia’s annexation of Crimea is illegal; its seizure of the Ukrainian ships in the Kerch Strait is illegal; and its detention of Ukrainian crew members is illegal”. Oksana Yurynets, Head of the Ukrainian delegation to the NATO PA, thanked Ms Moon for the strong position she had taken on this issue from the beginning of the crisis.

Allied and Ukrainian parliamentarians called upon Moscow to unconditionally release the vessels and their crew, and to cease hindering Ukraine from exercising its right to free navigation in the Kerch Strait and the Sea of Azov.  They supported additional sanctions against Russia if Moscow continued its non-compliance with international law. Emphasizing NATO’s growing attention to the Black Sea, Deputy Secretary General Gottemoeller reminded UNIC delegates that the Alliance has significantly increased its naval presence in the region and that it also conducts regular military exercises, including with Ukraine and with Georgia.

UNIC participants further reviewed Ukraine’s ongoing domestic reform agenda, noting that impressive progress had been achieved in 2018, while stressing that the pace of reform and implementation needed to be sustained throughout 2019, despite upcoming presidential and parliamentary elections due in March and October respectively.

This progress is most visible in the defence and security sector and is largely based on the recent adoption of law on national security.  Andriy Levus (Ukraine), briefed his Allied counterparts on the Verkhovna Rada’s efforts, in close consultation with NATO experts, to introduce additional legislation designed to reform “Soviet-style” security and intelligence services and to strengthen parliamentary oversight over the security sector.  A law put forward by the Rada envisages the creation of a special oversight committee in the next parliament.  The parliament is also considering additional measures to reform the defence industrial complex, improve the transparency of military procurement, and adopt NATO standards in defining state secrets.

While welcoming the progress, NATO officials stressed the need to entrench these reforms through doctrines, to continue working on the post-Soviet mindsets and culture within the defence sector, and to improve co-ordination among the Ministry of Defence, Ministry of Interior and other security actors. NATO representatives and Allied parliamentarians also urged Ukraine to do more to tackle corruption.

“The NATO PA – and our Council  in particular – will continue to support Ukraine on this path, and in turn we look to our Rada colleagues to continue being a real driver of reforms, in parliament, in government, and in society more broadly”, Ms Moon stressed during the meeting.

Ukraine has set NATO membership as its foreign policy objective, and inscribed this goal in its constitution. NATO officials and ambassadors regretted that meetings of the NATO-Ukraine Commission (NUC) above the level of the Permanent Representatives are currently on hold due to bilateral differences between Ukraine and Hungary on the education law passed by the Ukrainian parliament. Ukrainian lawmakers informed NATO officials and parliamentarians that the Verkhovna Rada plans to consider two new bills within the coming months that would postpone implementation of the education law until 2023.  Ukraine’s readiness to seek compromise on this matter was welcomed by all participants.

The implementation of the Minsk Agreements and the situation in the illegally occupied Crimea were central themes on the meeting’s agenda.  While the Minsk agreements are far from perfect, they remain “the only game in town”, participants heard, and no viable alternative has been put forward. Allied legislators regretted that negotiations find themselves in a stalemate and that the main element of the agreement – the ceasefire – is being routinely violated. Ukrainian parliamentarians noted that while the Minsk accord is deeply unpopular in Ukraine, the country’s leadership remains committed to implementing it.

Beyond its political support to Ukraine’s sovereignty and territorial integrity, NATO assists Ukraine through a multifaceted programme of cooperation – the Comprehensive Assistance Package – which includes several Trust Funds and advice provided by NATO experts based in Kyiv. Cooperation extends as well to strategic communications and cyber security.  The NATO-Ukraine joint Platform on Countering Hybrid Warfare launched in 2017 helps build Ukraine’s capacity and strengthen its resilience against hybrid threats. Ukrainian speakers noted that Ukraine’s experience in countering these threats is of value for the Alliance. They also underscored the importance of the recent separation of the Ukrainian Orthodox Church from Moscow’s jurisdiction, noting that the Kremlin had used the Church channels as one of the elements in its hybrid tactics to destabilise Ukraine.

The Joint Monitoring Group with Ukraine was created in 1998 with the aim of demonstrating parliamentary interest and involvement in cooperation between NATO and Ukraine. It adopted its current name - the Ukraine-NATO Interparliamentary Council - in 2003. It brings together high-ranking parliamentarians from Ukraine with an equivalent number of their counterparts from NATO member countries. 22 members of parliament from 10 member countries of NATO and from Ukraine participated in yesterday’s meeting.  The Council normally meets twice a year: in Brussels and in Ukraine. Over the years, it has become an active political forum where members of parliament from NATO and Ukraine can discuss any and all issues of common concern and interest.