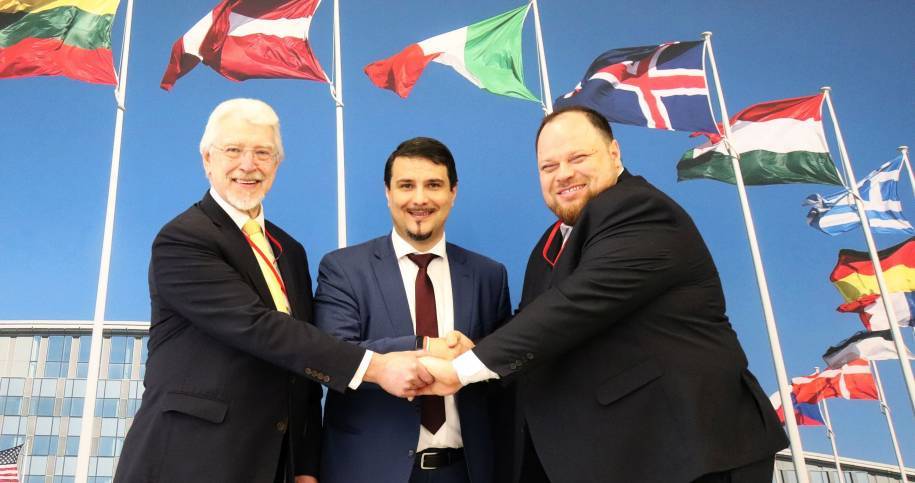 Meeting remotely for the first time, the Ukraine-NATO Interparliamentary Council (UNIC) firmly condemned Russia’s illegal and illegitimate occupation of Crimea and continuing efforts to destabilise Ukraine. Members of the NATO Parliamentary Assembly (NATO PA) expressed their wholehearted solidarity with Ukraine and their full support to the country’s sovereignty and territorial integrity.

“Russia’s aggressive actions have not stopped during the ongoing COVID-19 crisis,” NATO PA President Attila Mesterhazy (Hungary) stressed when opening the meeting of 23 lawmakers from 8 Allied countries and Ukraine.

“Ceasefire violations in Eastern Ukraine still occur daily. Russia continues its illegal annexation and occupation of Crimea, deliberate destabilisation of Eastern Ukraine, and violates human rights on Ukrainian territory. All of this the Assembly has strongly condemned and will do so going forward.”

UNIC Co-Chairperson Ojars Eriks Kalnins (Latvia) added that “the Kremlin seeks to tighten its grip on Donbas, Crimea, the Kerch Strait, and the Sea of Azov and has stepped up its ‘passportisation’ and disinformation campaigns. This must stop.”

“The vote on Russian Constitutional amendments, illegally organised and held on the temporally occupied territories of Ukraine, is another flagrant violation of international law”, stressed Ruslan Stefanchuk, First Deputy Chairperson of the Verkhovna Rada of Ukraine and UNIC Co-Chairperson.

“We encourage NATO’s member states not to recognise the holding of an illegal vote by Russia in Crimea, Donetsk, and Luhansk and to consider the introduction of sanctions against persons involved in the preparation and conduct of this illegal vote on the occupied territory of Ukraine on the Constitutional amendments held on 1 July.”

“We are looking forward to the support of our NATO partners, including through additional pressure on the Russian side to force the Kremlin to begin fulfilling its obligations under the Minsk arrangements.”

The UNIC met at a time when the world still grapples with the COVID-19 crisis and its wide-ranging consequences.

“None of our countries has been spared by the COVID-19 pandemic and all its terrible side-effects – not least the negative economic impact,” noted President Mesterhazy. “It is therefore extremely important to exchange views among lawmakers.”

“The Assembly stands in full solidarity with Ukraine in the fight against COVID-19,” stressed Mr Kalnins. “I am very happy NATO could help Ukraine deal with the crisis through support by the Euro-Atlantic Disaster Response Coordination Centre (EADRCC) – NATO’s principal civil emergency response mechanism.”

“I would like to express our appreciation for the help provided by Allies and other international partners in the fight against COVID-19. We are also grateful to NATO and its member states for assistance to alleviate the consequences of floods in the Carpathian region (Western Ukraine) in response to our request presented in the EADRCC”, underlined Mr Stefanchuk.

“The Assembly has a special partnership with the Rada,” underlined President Mesterhazy. “And we support our Ukrainian colleagues in their path of reform and European and Euro-Atlantic integration.”

Mr Kalnins called the recent USD 5 billion loan by the International Monetary Fund “excellent news.” He lauded the crucial reforms adopted in the Verkhovna Rada, which led to the loan. However, he noted the need for further reforms. “We had very good discussions with our Ukrainian partners on this.”

During discussion, Mr Stefanchuk emphasised: “We are determined to continue the reform agenda, which brings Ukraine closer to the NATO membership criteria and strengthens our defence and interoperability. We will continue to give priority to defence and security reforms based on NATO standards; fighting corruption, especially in the sphere of defence procurement; civil and democratic control over the security sector; and national resilience. The implementation of the Annual National Programme is our roadmap in this.”

“I strongly welcome this status upgrade,” said President Mesterhazy. “Ukraine has long demonstrated it is willing and able to contribute to Euro-Atlantic security, even as it continues to face Russia’s aggression on its own territory.”

Mr Kalnins emphasised that “this decision recognises Ukraine's long standing and strong contributions to NATO missions and demonstrates the Alliance's sustained commitment to its partnerships despite the COVID-19 pandemic.”

During the meeting, UNIC members also engaged in in-depth discussions with Emine Dzhaparova, Ukraine’s First Deputy Minister of Foreign Affairs, Alexander Vinnikov, Head of the NATO Representation to Ukraine, and Barbora Maronkova, Director at the NATO Information and Documentation Centre in Ukraine.

“In these challenging times, Ukraine has already proved to be a reliable partner of the Alliance, while cooperating in the defence-military sphere by providing its planes for strategic airlifting of critical medical equipment against the backdrop of countering COVID-19. We are ready to continue to do our best in this regard,” Mr Stefanchuck said.

“We very much appreciate Allies’ decision to recognise Ukraine as an Enhanced Opportunities Partner. This step recognises Ukraine's outstanding contributions to Euro-Atlantic security and will lead to even stronger engagement between Ukraine and the Alliance,” highlighted Mr Stefanchuk.

Closing the meeting, President Mesterhazy thanked Ukraine for offering to host the Assembly in 2022 following the cancellation, due to the coronavirus pandemic, of the NATO PA Spring Session which was due to be held in Kyiv in May 2020. He also expressed his hope to be able to visit Ukraine as soon as possible.

Ukraine is one of the NATO PA’s earliest and closest partners. In addition to Ukraine’s active participation in NATO PA activities, UNIC provides a dedicated forum for dialogue between NATO PA legislators and their counterparts from the Verkhovna Rada of Ukraine. UNIC was created in 1998 to bring greater transparency to the implementation of the NATO–Ukraine Charter and to demonstrate parliamentary interest and involvement in cooperation between NATO and Ukraine. It has since become a wider forum where members can discuss any issues of mutual concern. UNIC normally meets twice a year: once in Brussels at NATO HQ and once in Ukraine.