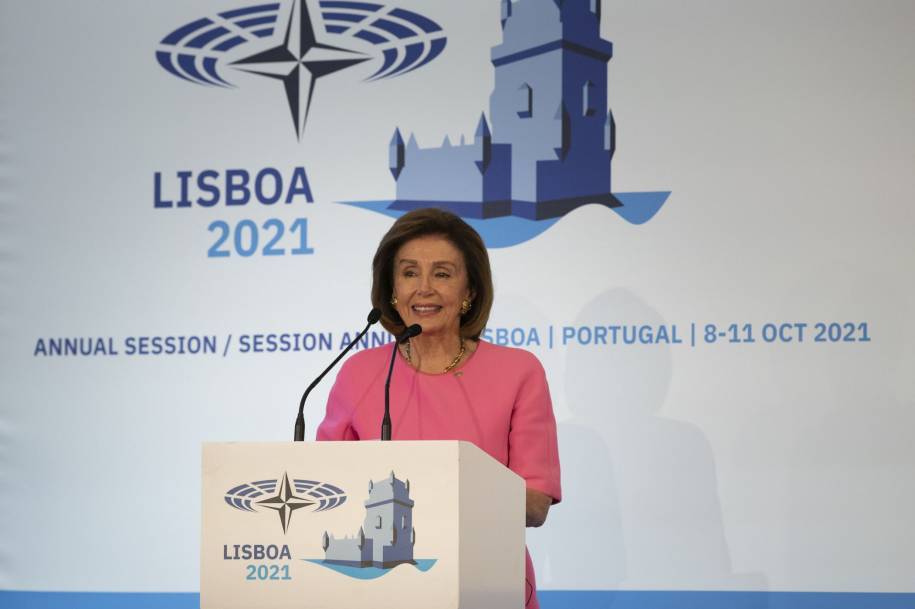 The Honorable Nancy Pelosi, Speaker of the United States House of Representatives, was awarded the first-ever “Women for Peace and Security” award during the Plenary Sitting of the 67th Annual Session of the NATO Parliamentary Assembly (NATO PA), taking place in Lisbon, Portugal.

“As a leader on security and intelligence matters, she has advocated for the equal participation of women in international security missions, raised the plight of women in conflict, and fought for the involvement of women in reconciliation and recovery initiatives around the world”, noted President Connolly.

“I am honored to receive the Women for Peace and Security Award,” said Speaker Pelosi.  “The purpose of NATO is further realized by women’s full and equal participation in security matters.  For over 25 years, my background in the Congress has had a security and intelligence focus, from Intel Committee Member to Speaker.  One of my goals in that capacity has been bringing diversity to this arena: women and people of color.  I want the face of security in America to include women! This is not about mere representation; it is about ensuring that we have diverse, strong and inclusive perspectives at the table as we address regional and global conflict – which very often disproportionally affects women.”
“Under Speaker Pelosi’s leadership, the US Congress has advanced sweeping gender equality initiatives both domestically and abroad as she has urged women around the globe to ‘know your power’”, Mr Connolly noted. “I am delighted the NATO PA has recognised Speaker Pelosi’s exceptional contribution with this award.”

Speaker Pelosi was a member of the NATO PA for over a decade. During this time, and later as Speaker, she has led efforts to strengthen transatlantic security through US Congressional engagement with and support for NATO, Allied countries and the Assembly. Since her re election as Speaker in 2019, she has led large, bipartisan congressional delegations abroad, including to the 2019 and 2020 North Atlantic Council and NATO PA Joint Committee meetings in Brussels. She also facilitated NATO Secretary General Stoltenberg’s joint address to the US Congress in observance of the 70th anniversary of NATO, making him the first-ever leader of a multilateral organisation to do so and providing him with a platform to propound on the importance of the NATO Alliance and the unique transatlantic bond.

The NATO PA created the “Women for Peace and Security” award earlier this year to honour a woman who has made an exceptional contribution to the equal participation of women and men in the field of peace and security, the protection of women in conflict situations and/or the mainstreaming of women's needs and perspectives into relief and recovery initiatives in post-conflict countries.